By Lorie and Paul Bennett

The Cafayate wine region of Argentina doesn't get the attention and glory of Mendoza, but this high-altitude region turns out distinctive wines in scenic settings, perfect for a leisurely tour without the crowds. 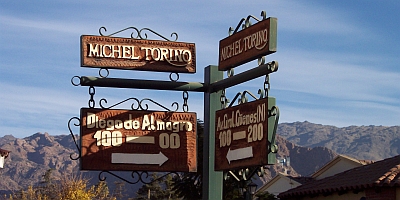 Touring the Salta Region with Grapevine Wine Tours and Altro Turismo was breathtaking in both a real and literal sense, but we’re anxious to start trying some serious wine. So we leave Salta with our same driver Fede at the wheel and set off on a five–day swing south to Cafayate’s Ruta de Vino and a few of its 22 wineries.

In this area, grapes grow at altitudes between 1,600 meters (5,500 feet) and 3,128 meters (10,264 feet) and climate is everything. Given 350 days of intense sunlight and temperatures ranging from 100 degrees F in the daytime down to 50 at night, the vines produce fruit that is highly aromatic and flavorful.

We’re soon juddering along a single–lane dirt road skirting the rocky cliffs of Quebrada de Escoipe gorge. It’s a long way down to the river! Across a narrow bridge, then up great, swooping switchbacks to Cuesta del Obispo, where we bargain for an ocarina (clay flute). We wonder how the vendors get to this isolated viewpoint to conduct their daily business.

We continue through Cardones (Cactus) National Park and along the Corte las Fleches, an arrow–straight road built by the Incas. The scarlet of peppers drying in the sun for paprika competes for our attention with the red rock of the mountains. 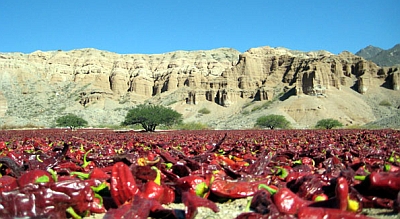 At the restaurant Sala de Payogasta, the Greek owner offers us a twist on his ethnic cuisine with a “tortila musaka”—onion, tomato and red peppers layered between slices of eggplant, topped with cheese and baked. With pan casero (bread from a domed clay oven) to sop up the juices and a glass or two of chilled Torrontés white, this is gourmet road food. No surprise that it’s late afternoon when we reach the first winery stop!

Bodega Colomé lies 12 miles off the national highway over a trail fit for goats not cars, but we feel the destination in the Valle Encantado (Enchanted Valley) is definitely worth the journey. Purchased in 2001 by international winemaker Donald Hess and upgraded from Argentina’s oldest winery (established in 1831), the bodega sits at 2,255 meters and sources grapes from vineyards claimed to be the highest in the world at 3,128 meters (10,264 feet). These include blocks of Malbec and Cabernet Sauvignon imported from Bordeaux in 1854, before phylloxera.

Hess himself narrates an introductory documentary in a small cinema and, in the tasting room, we sample three reds, Colomé Reserva, Colomé Malbec and Amalaya de Colomé. The winery’s one white, a classic Argentine Torrontés, is made from a Muscat-like grape brought to the area by Spanish colonizers centuries ago.

Colomé’s boutique hotel offers nine suites with spacious verandas overlooking the serene valley. We admire Picasso and Matisse prints from the Hess collection in the hotel’s public spaces and chuckle at original cartoons of cowboys and their horses in the gaucho bar. A large swimming pool sits among the vineyards and we wish we could linger.

After driving further on the main road, we overnight at historic Hacienda del Molinas (House of Windmills), built for a Spanish viceroy in the 1700s. The town was founded in 1659 and today the hotel’s ancient adobe walls house modernized rooms around a patio shaded by an enormous peppercorn tree. A little farther on, we find laid-back Cachi, beneath snow–capped Nevado de Cachi at 5,791 meters, another place we wish we could enjoy for several days. The museum shows the unique art and culture of the Tiahuanaco people who pre–date the Inca Empire in this area.

But more wineries beckon. After dropping our bags at the Cafayate Wine Resort three miles from town, we head up El Cajón Hill to the Bodega José Luis Mounier at Finca las Nubes (Farm of the Clouds). This family–run boutique winery caters to those who seek exceptional organic wines. 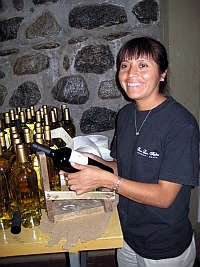 Maria Mercedes Cata speaks no English and all the brochures were given out at the community harvest and celebration the night before but, with Fede’s help, we learn that winemaker José Luis Mounier won accolades at the respected Etchart winery before starting his own vineyard. The vines, growing at around 1,850 meters, are drip–irrigated and organically fertilized with goat manure and grape pomace. Grapes are hand selected and hand picked; even labels are applied by hand. Output is just 50,000 bottles a year.

This is rural paradise! As we relax on the home’s front veranda for lunch and tasting, colorful butterflies flit among the overhanging vines, a playful kitten repeatedly slides down a rock and a distant donkey brays. To accompany artisan goat cheese, Maria pours a pale tourmaline Torrontés, rich in tropical fruits on the nose, surprisingly dry on the palate. A Cabernet–Malbec blend goes well with a superb tenderloin steak cooked on a traditional parrilla grill and a Malbec–based Rosado sits briskly on the tongue with the flan dessert.

We’re sated and ready for a nap but energetic Fede urges us on to Bodega San Pedro de Yacochuya where the vineyards are more than 1,980 meters above sea level. This winery has high–born origins too. Founded in 1992 as a joint venture between the renowned Etchart family and leading French winemaker Michel Rolland, Yacochuya means “clear water” in Quechua and the winery has precious rights to half the water from the Yacochuya River. Output is 100,000 bottles a year, 80 percent red and 20 per cent Torrontés.