Splashy suites, the first traditional Turkish hammam in Latin America, and a taste of Mendoza wine country await at this polished and playful retreat. 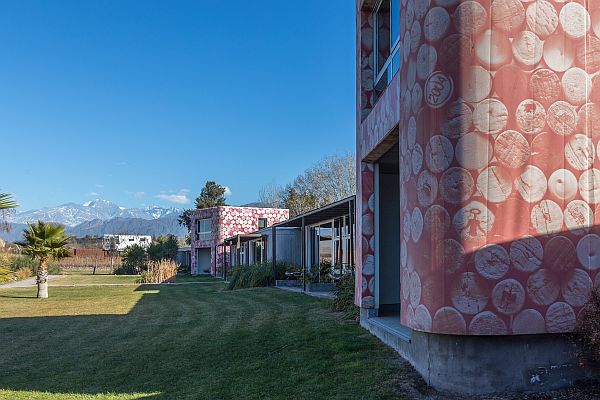 You could say it was meant to be. The owners, a group of friends from Switzerland, certainly do. They spent weeks traveling around Argentina with real estate agents looking for the right property for their hotel project. In the end, the perfect plot wasn't even on the market, but they got their hands on it anyway and Entre Cielos Luxury Wine Hotel & Spa opened in 2010 just outside the city of Mendoza. 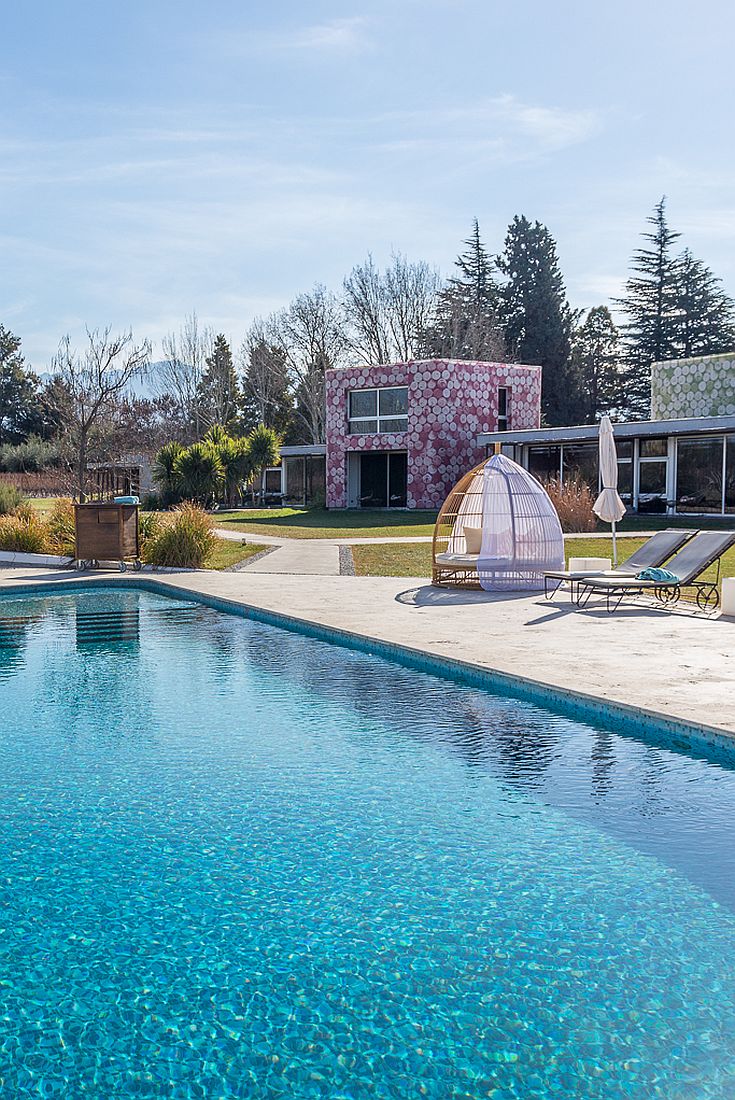 Right off the bat, the hotel established its European/Latin personality with a resort-like pool, an honor bar, a lobby wall covered in oversized “refrigerator poetry” style magnets for guests to manipulate into playful phrases, a jar of freshly-baked cookies on the bar all day, and a multi-station Vita Parcours outdoor fitness course. They added a “no children under 12 policy” to maintain the playful but sophisticated atmosphere.

Another point of difference: the first traditional Turkish hammam in Latin America. Inspired by a beloved hammam in Bern, Switzerland, the 6,500 square foot facility at the hotel took nine months to build. The self-serve hammam circuit includes pools, a steam room, a mud room, an exfoliation room, and more. The circuit ends in a relaxation room where a table is set with water, juice, and a few small snacks. To foster a private spa feeling, circuit visits are timed by reservation only to minimize guest overlap. Massages (the hotel masseuse was trained by a Swiss hammam master) and skin treatments are also available, some done with products containing grape seed extract.

The hotel's 15 original rooms include one 1,050 square foot Master Suite with a private outdoor Jacuzzi, six Junior Suites of roughly half that size, and four 915 square foot Duplex Suites. These are in cubes wrapped in sheer exo-skins depicting enormous wine corks. Four 400 square foot Standard Rooms round out the originals. 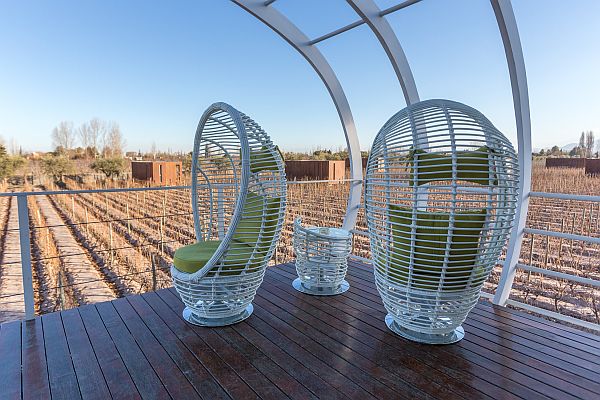 The smallest room, added later, is now the hotel's most iconic room—and the most popular. Simply called Wine, it was designed by Andreas Wenning, a German architect known for his raised structures. This all-white, modern, sleek tubular room sits on stilts and features skylights and an outdoor Jacuzzi. It is the most popular accommodation at the hotel.

In 2018, the owners created eight Vineyard Lofts in prefab rectangles (like chic shipping containers). They placed these among the hotel's eight acres of Malbec vines, some of the vines being more than 80 years old. These open plan rooms include a bathroom with a heated towel rack and locally made amenities, but, oddly, no curtain on the window). The room has a king-size bed (USB chargers by the bed are a nice touch), and a small sitting area with a desk. The furnished patio, where you can enjoy your breakfast during the summer months, feels immersed in the vineyard. I saw a mara (a rabbit-like animal) scurry through the vines around my Vineyard Loft patio early one morning. 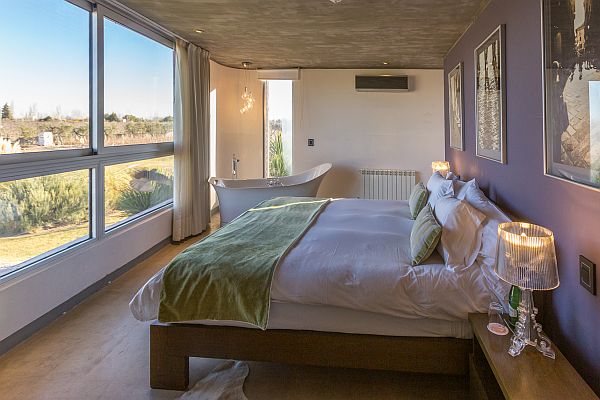 You can see the pre-cordillera mountain range and the high peaks of the Andes in the distance from any of the rooms at Entre Cielos Wine Hotel. All of them include robes and slippers, Wi-Fi, and arresting design elements. Wallpaper doubles as bold art in striking colors and intricate patterns, with playful hidden imagery. The round light above your bed might be faced with the topography of the moon, which comes to life when you turn it on. In addition, guests who book a suite get one complimentary 90-minute Classic Hammam Circuit per person during their stay. All rooms except the Vineyard Lofts have TVs.

Guided tastings of the hotel's wines, which currently include a Malbec, a rosé, and a gran Malbec, are held every Friday evening—or by special advance request on other nights. It's a good way to meet other guests and learn more about the evolving Entre Cielos wine project. 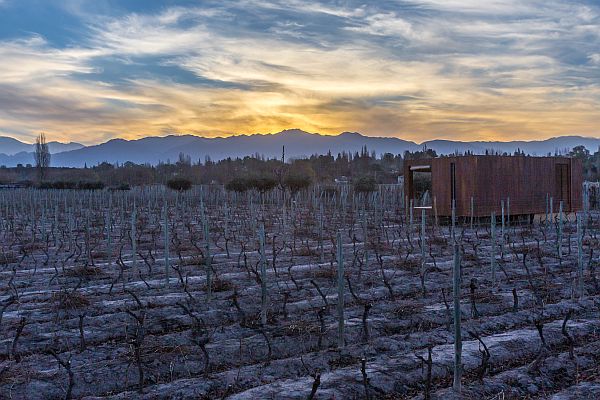 When I was at the hotel, the food and beverage program in the hotel's Katharina Bistro was the weak link. However, a new executive chef with big ideas was just entering the picture, so I'm confident improvements are on the way.

In the meantime, make a dinner reservation at nearby Brindillas Restaurant where Argentinean chef Mariano Gallego presents a 4-course tasting menu. It includes dishes like puff pastry topped with fresh mushrooms and blood sausage dust, which delivers textures and a burst of umami, and moist and balanced corvina in bier blanc sauce. All of it is served by knowledgeable and English-speaking staff and backed up by a lovely wine list. It's a dining highlight in the region. 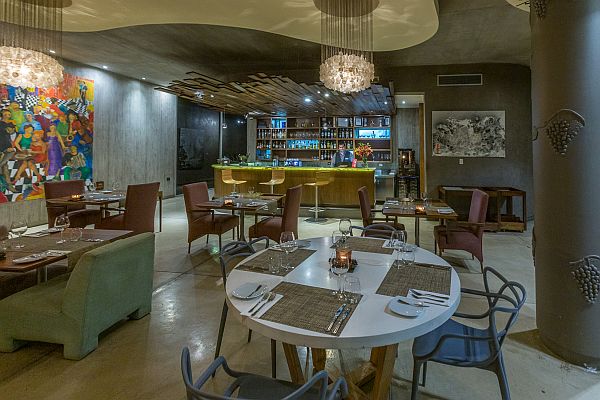 Competition has been slowly but surely heating up in Argentina's main wine region of Mendoza, but as Entre Cielos hits its 10th birthday, it remains one of the top luxury wine hotel choices in the area.

Review and photos by Karen Catchpole, photos by Eric Mohl.