From Argentina to Antarctica with Quark Expeditions—Part 2

For 48 hours, we rolled and bounced about our cabin ("Price of admission to Antarctica" a British passenger chuckled over an abbreviated dinner one evening) before we entered the Antarctic Sound. Three sea sickness patches got me through the entire trip, with just a bit of nausea and wonderful tales to tell afterwards.

A passage I wrote while onboard: "Well, they say that Drake Passage is the roughest area of ocean on Earth, and both Claire and I can verify that now. Two nights ago, the ship had to turn away on a re-course due to storms, and that's where most of the fun started. Imagine being on a coaster during an 8.0 quake — remember the scene in the movie Poltergeist, when everything went flying around the room? And throughout yesterday it continued, rolling and pitching, pitching and rolling.

But now as we cruise smoothly through the Weddell Sea, gazing at our first monolithic icebergs, well, I'd still say "nyet" if asked by one of the Russian crew if I'd like to get back in the Drake today. But standing outside a moment ago in the clear, ice–cold air and gazing at the blue–white mountains in the distance, it was certainly worth every minute of the rough sea.

The Quark crew continues to impress with their expertise, organization and just plain good company. And the passengers we continue to meet over meals are equally enjoyable—some truly interesting folks. The people that take trips like this truly add to the uniqueness of the experience. It's a cultured, enthusiastic lot that seems to take everything in stride. 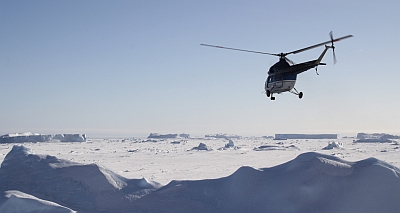 We may take an ice walk today to test our gear, and it looks like tomorrow will be the first helicopter rides to visit the penguins. (And we're sure to see some icebreaking today by this no-nonsense ship). Very surreal to be here right now — but we are — factor in spectacular meals and excellent company and this becomes truly a trip for the ages. Onward!"

Passing gorgeous blue icebergs and glaciers, we soon arrived at Snow Hill Island, and the Kapitan created a parking space for itself by cutting into the ice. We’d stay here for several days to visit the Emperor colonies before heading back up the coast to visit some other islands where different species of penguins lived. But for most aboard, Snow Hill Island was the pivotal part of the trip and all fingers were crossed for good weather. (Weather does dictate a lot on a trip like this – patience and understanding become key).

We took an ice walk after arrival for about an hour and saw lots of emperor penguins in the distance checking us out — as if they sensed that the aliens had arrived. The next day, the helicopters were readied, we were divided up into teams of six or so, and the adventure hit high gear as we were whisked across the tundra to meet the emperors.

Here is the passage I wrote from the ice at the end of this day: "Trying to make sense of the day — it was just that spectacular. Beautiful weather allowed the helicopters access to the Emperor Penguin colony on Snow Hill Island. A brief (about 8 minutes), thrilling chopper ride from the deck across a strange, profoundly frozen, powder blue landscape. Smooth landing at base camp, where we are briefed on the 1.5 mile hike to the colony. As special as the colony was (more in a moment), I have to say we enjoyed the hike as much as anything thus far. To be alone, just the two of us, trudging across ice and snow in this otherworldly place was worth it all. 'Like a Star Wars planet,' Claire said — and she was right. Strange, purple and orange cloud patterns swirled in the distance and the expanse of turquoise and white 'moonscape' became almost impossible to describe: it's just that unique. The winds were steady, the sunlight created bizarre spectrums of color. This really was like being in another galaxy, far, far away.

Oh, and then you begin to notice shapes approaching you — several plump figures, black and white and orange — the Emperors approaching the trail. Close enough to touch, they look at you, shake their heads side to side, point a wing as if to say 'this way' and then glide away on the bellies. In the distance you notice rows of them, follow-the-leader-ish. Every 100 paces or so, a couple of them pass very close enough for us to eavesdrop on their discussions. Then, in the distance, you hear the chirping. The chicks. And several hundred yards away, you see what looks like mass gatherings on hillsides — thousands of them strong — the Snow Hill Island Colony.

The Quark team leader Shane greets us at the end of the trail for a quick briefing, and then we wander from group to group — finding a spot to sit at the furthest group out, because it is the quietest. On this day the colony seems comprised of about 6 major groupings, each containing hundreds or thousands of birds. From this point, you just sort of lose yourself in the moment. Hundreds of month-old chicks wander around, some in packs, some solo. They cluster in groups with adults, and then break apart.

The fresh icy air is filled with the music of Emperor Penguin chirps, honks, squawks. Photographers scramble for a perfect shot, but really you cannot take a bad photo here. Every second provides a new one of kind perspective. The penguins are curious, calm and relaxed around all of us. Their society seems structured enough, yet there are the wanderers who break away and disappear in the distance. The concept of observing nature all of a sudden flips and you realize that the nature is also observing you—by the thousands. As for the chicks, to us they seemed like the cutest, most vulnerable creatures on earth—indescribably perfect.

This was the main mission of the expedition and it was realized at its optimum, most poetic level, spectacular in ways that will take a long time to process and perfectly orchestrated by the Quark team and Russian onboard crew."