Story and photos by Bridget Gleeson

"I don't think there's a more beautiful place anywhere in the world." It sounds like just–got–back–from–vacation hyperbole, but take note—these words were spoken by one of the richest men in the world, media magnate Ted Turner. He was referring, of course, to the sprawling ranch he owns in the pristine lake district of Argentina's northern Patagonia. 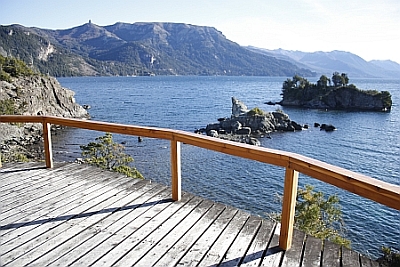 I imagine clear rivers running thick with rainbow trout, and fresh mountain air—but really, I wonder, what could be so special about the Patagonia region that it turns billionaires sentimental and inspires everyone from the Italian Benetton family to basketball star Manu Ginobili to snap up large chunks of land?

If there's anyone who can properly show me, I'm told, it's Maita Barrenechea, founder of Buenos Aires–based specialty travel agency www.mai10.com.ar. For more than two decades, her team has created upscale, tailor–made outdoor trips. My 12–day trip will be based on my individual profile: I'm an American female, 26 years old, an amateur photographer, I ride horses well but I've never tried fly–fishing.

The reception clerk hands me a beautifully wrapped package from Mai10 as I check into the Palacio Duhau Park Hyatt in Buenos Aires. Upstairs in the airy, contemporary park suite, which faces the central courtyard and the grand facade of the Duhau mansion, I look through my personalized itinerary. Maita has paired me with young fishing and riding guides, and arranged activities from a photo safari to a wine tasting. The concept combines luxury with local character—I won't be staying in any deluxe chain hotels on my Patagonia trip, but rather in old-fashioned estancias and small, fashionable boutique hotels.

Before I head into the country, I'll have a low–key evening in the capital city. First up: a deep tissue massage at the Park Hyatt's shiny Ahin spa, where treatments are based on Mapuche traditions and a spa menu allows guests to choose their own details (for me, Andean music and lavender tea.) Then it's off to dinner at the high–end parrilla (steakhouse) Fervor, an easy two-block stroll from the hotel. The cozy dining room is filled with the aroma of sizzling scallops and steaks as I step through the doors; I opt for octopus, shrimp grilled on a wooden skewer, and a 2006 Saint Felicien Chardonnay.

Early on Monday morning, a slick town car transports me from the Park Hyatt to Aeroparque, Buenos Aires' domestic airport, for my quick flight to Bariloche. Mai10's guide, Guillermo Sympson, greets me in the arrivals hall and we climb into his SUV to make the hour–long trip to Arroyo Verde, the first estancia on my trip. The winding roads lead us through stunning terrain, from the crystal-blue Lake Nahuel Huapi to the dramatic rock formations in the “Enchanted Valley.” Guille grew up here, and he's something of a nature expert. He points out high–flying condors and volcanic rocks on the path leading to Arroyo Verde's main lodge.

Before I've even stepped out of the car, the estancia's owners, standing on the manicured lawn, ask whether I'd prefer a gin and tonic or a glass of white wine before lunch begins. Meme Lariviere, I'll quickly learn, embodies old-fashioned glamour. She's a practiced hostess with refined tastes, while her daughter Marina, friendly and down–to–earth, is the sort of woman who doesn't mind lugging logs into the living room to throw into the fireplace. These personal details are important when you're staying at an estancia, because an estancia is not a hotel where guests retreat to their suites and order room service at night. Visiting a traditional Argentine estancia is a highly social affair: meals are communal and leisurely, and guests are encouraged to join the family as they gather around the fire, leafing through art books and playing cards. Happily, the Larivieres are more than likable; they're worldly and kind.

Buby Calvo designed the lodge, a wood and stone structure lined with huge picture windows that take full advantage of the striking mountain valley setting and allow guests to observe the deer that often wander into the yard in the evening. The lodge's four double bedrooms with private bathrooms are gracefully appointed and outfitted with fine linens and bath products, but there are no outlandish extravagances here. The ambiance is homey, making guests feel like they're spending the night at a friend's plush country house.

After kicking back with a glass of wine on the sunny patio, I'm ushered into the dining room for lunch. Meals at Arroyo Verde are gourmet and formally served. During my days at the estancia, I feast on lamb with mint sauce, grilled zucchini, bacon-wrapped steak, frozen chocolate mousse, crepes with dulce de leche (the house special), and a number of fine Patagonian wines. 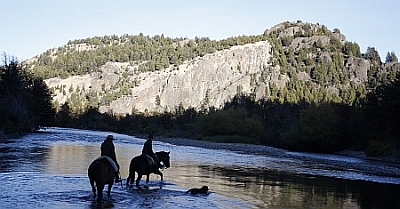 Of course the cuisine is merely a side attraction at Arroyo Verde. The ranch is an outdoor wonderland, and in the days that follow, I explore the ranch with Mai10's guides. Guille takes me horseback riding high up into the forested cliffs overlooking the lake and shows me the estancia's private "honeymoon cabin," perched on a high ledge over the water. Passing through an orchard, we bite into green apples just picked off the trees, and Guille points out Ted Turner's ranch, La Primavera. The natural boundary between the two estancias is the Rio Traful, the snaking blue river rich with trout and landlocked salmon that brings avid anglers from far and wide. 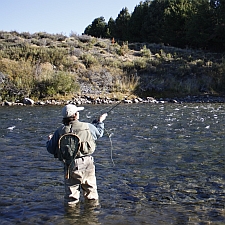 Fly–fishing, I learn, is a gentle art—it's strictly catch-and-release in much of Patagonia—and a means of spending quiet, meditative time in close contact with nature. Martin Sere, another youthful guide from Mai10, is my teacher. We have a quick casting lesson in the garden before we slip into our waders and felt-bottomed boots. We spend the next eight hours standing thigh–deep in the rushing river, casting the line and waiting for a "strike."

Martin is quick to change tactics, to "think like the fish thinks," as he says, by moving us further down the river when we're not having any luck, by checking the temperature of the water with a little thermometer, and constantly changing the colorful flies. It's a peaceful sport. As I scramble over some large rocks, trying to keep up with Martin, he turns back to me and says, with a smile, "We're not in a hurry, okay?" We catch a few small rainbow trout before we pull in our big catch of the day—a 21–inch landlocked salmon.

At dusk, we're cold and damp. Returning to the lodge, where fires are crackling and the chef is already whipping up hors d'ouvres made from wild mushrooms she picked earlier that afternoon, I understand—even after just a single day out on the river—why a journalist from Forbes called Arroyo Verde "the greatest fishing lodge in the world. Period."