Situated in the fashionable Palermo Hollywood district of Buenos Aires, which attracts filmmakers, models, and actors galore, the Euro–chic Fierro is a gem of a boutique hotel.

A suite at Fierro feels more like a well-designed bachelor pad than a hotel room, and is the type of place that you could use comfortably as your home base for days or weeks at a time. Having a mere 27 large suites makes personalized service a given, and the multi-lingual hotel director maintains a strong presence to make sure that everything in your stay meets or exceeds your expectations. This, topped with having one of the best restaurants in Buenos Aires right on site, Fierro is a great choice for discerning guests that want to experience ultra-modern amenities in the comfort of their personal refuge in the bustling city.

The clean lines and sleek minimalist design are noted from the time that you walk through the sliding glass entryway. With a color palate of vibrant red, graphite, black, and stark white throughout the hotel, it is definitely not for guests who prefer the decadent golds and feminine florals of a hotel such as the French–influenced Sofitel. It is more like the type of hotel that the cool hipster kid in art class would design if he had free reign and a very large budget.

Rooms continue in this design, with dark platinum textured wallpaper, tweed chaise longues or chairs, and modern touches such as large LCD televisions, iPod docking ports, and iPads available for use on request. Rooms do not have a bathtub, but the combination of the large space, delicious citrusy organic bath products, and the high pressure rain shower make you not even miss a tub. There is also no ability to make coffee in the room (you would have to call for one from the restaurant), but management is promising that espresso machines are on the way.

Fierro really feels like a hotel with conscience. Although it is a newer hotel, it has quickly gained a lot of respect in the community for the way that the organization reaches out to support local people and events. One of the many small details that stood out was the inclusion in the minibar of locally made products. Try the rich chocolate cookies or the Parmesan crackers by Sugar and Spice, which are made right down the road in Palermo.

Although each suite is inviting, with sufficient space to have people over for drinks or a meeting, the terrace suite is the way to go to really feel like you are in Palermo. It comes with a large outdoor terrace, with a huge outdoor Jacuzzi and even a grill to indulge in a private traditional asado. Buenos Aires at times can feel overwhelming, but you can’t help but feel like you found your place in the city while drinking Malbec in the Jacuzzi, overlooking the streets of Palermo, after filling your belly with the world–famous Argentine barbecue. 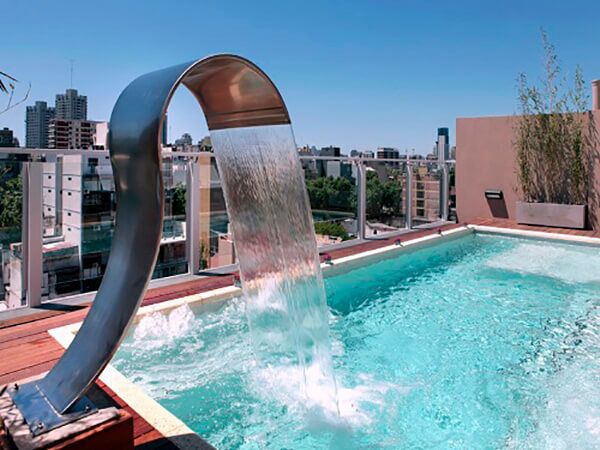 At night is the best time to visit the rooftop pool area. Even in the winter, the outdoor pool is heated to a balmy temperature. Standing underneath the powerful waterfall cascade will melt away any tension that you have, and there are even built–in lounge chair areas to lay in that have massage jets from below. Dry off afterwards with a visit to the sauna and you will be in your room sleeping like a baby in no time. 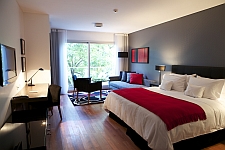 One thing that nearly every guest of Fierro can agree on is the quality of the night’s sleep that they get. To begin, each room has double-paned, soundproof glass that drowns out nearly every outside noise. As for the bed, even guests that are used to sleeping on great mattresses, with high–quality bedding, cannot put their finger on what it is exactly that makes for such a magical deep night’s sleep. In endless reviews from well-traveled clients, many say that it is the bed that will keep them coming back to Fierro time after time again. When questioned about this, management only smiled a sly smile and said that much time and effort went into the exact setup that they have. Whatever it is, it works!

Although Palermo is known for its wide array of gourmet restaurants, you may find yourself happily dining downstairs every single night at Hernan Gipponi. Ranked in some publications as the number one rated restaurant in the city, chef Hernan brings his years of experience from the Guggenheim Bilbao and Quique Dacosta’s El Poblet in Valencia, both of which received two Michelin stars under his guidance. To be able to experience his ever–changing, seasonal menu, complimented with organic vegetables and herbs grown in an on–site garden, without leaving the comfort of your hotel, is a rare treat. A must to try is the 9–course tasting menu, which includes a tapa, two entrees, fish of the day, a rice dish, a meat dish, pre-dessert, and two desserts, all paired with great wines. The massive wine list is overseen by Andres Rosberg, who happens to be the President of the Argentine Sommelier Association.

Surprising and quirky ingredients such as tomato gel, watercress foam, or crème de tic–tac made from the mint candies mix well with more traditional Argentine offerings to make for an absolutely memorable dining experience. On Thursdays the hotel hosts informal wine tastings from 6–7:30pm, which is a great opportunity to learn more about Argentine wines.

In the morning, do not think of leaving Fierro for breakfast. Dubbed the best breakfast in Buenos Aires on more than one occasion, it seems like another endless and creative culinary offering from chef Hernan, and the best deal around at less than US$15. It is filled with selections of both fresh fruit and vegetable juices, yogurt with cereal, fresh breads, fluffy scrambled eggs, brie, a tostada with ham, pancetta, and espresso, all of which can be enjoyed in the large and lush outdoor garden area.

There are a number of boutique hotels in Buenos Aires, especially in Palermo. Many have great amenities, pretty rooms, and pretty staffers. Fierro stands out because it pays attention to every detail and makes a concerted effort to get everything just right, the best that it can be. Mediocrity is not tolerated in any form. Although Fierro is new and the rates are a relative bargain compared to many Buenos Aires properties, it has the makings of a hotel whose great reputation will only continue to grow.