This year-round hotel has one of the most stunning waterfront locations in Ushuaia and offers excellent excursions, but choose your room carefully to make the most of the epic views. 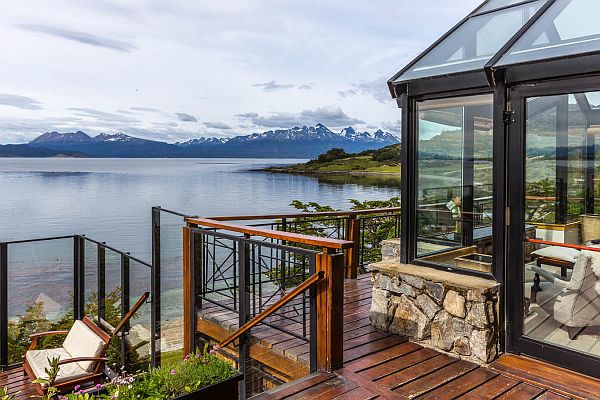 The design of the hotel takes advantage of its exclusive location with ample wood patios over the channel and the small pebble beach on the shoreline. Most of the hotel's 54 rooms also face the channel and all suites have small private patios over the bay. Nineteen standard rooms, however, do not have water views and are smaller than other accommodations. It's worth booking a larger water-view room.

One room is handicapped accessible and has adaptations for those with reduced vision and for deaf guests as well. There's also a handicapped-accessible bathroom off the lobby. All rooms have a mini-fridge and access to an extensive pillow menu, and all guests can use the purified water dispenser in the lobby to refill bottles with hot or cold water.

Located in a gated community, the 4-level Los Cauquenes hotel has a calm and private feeling far removed from the bustle of central Ushuaia. Staff members speak English and remember your name (even when the hotel is full).

The hotel's spa, which is also open to non-guests, has four treatment rooms (two have water views). The treatment menu includes massages, body wraps, exfoliations, and facials, plus a few indulgent packages. All guests have access to the gym, equipped with all of the major machines (steppers, stationary bikes, treadmills, weight machines) plus kettle bells and free-weights. All guests can also use the hotel's heated indoor pool, the indoor and outdoor Jacuzzis, the sauna, and the steam room. 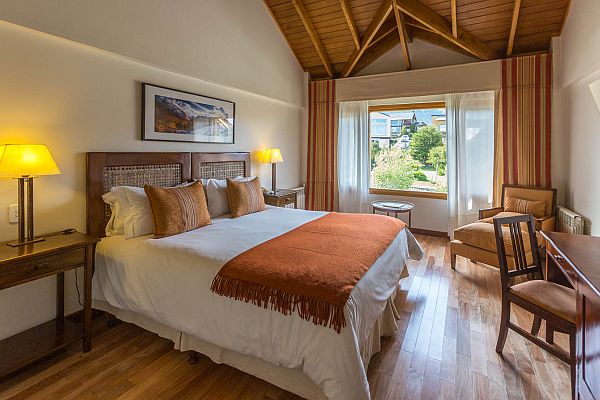 Because the hotel is not in central Ushuaia, you may be eating many meals in the hotel. Unfortunately, my dinner at the hotel's Reinamora Restaurant was a disappointment. My plate was dirty, the bread was greasy, and I had to send my steak back to be cooked more (though I'd ordered it medium). The curt waiter also recommended an Argentinean Malbec that was sour and a bit turned as if the bottle had been open too long.

The breakfast buffet, served in the same dining room, included fruit, cereals, yogurt, eggs to order, fresh juice and decent coffee—a fine start to the day but nothing spectacular. The hotel's small wine bar offers a simpler menu which is also the room service menu. 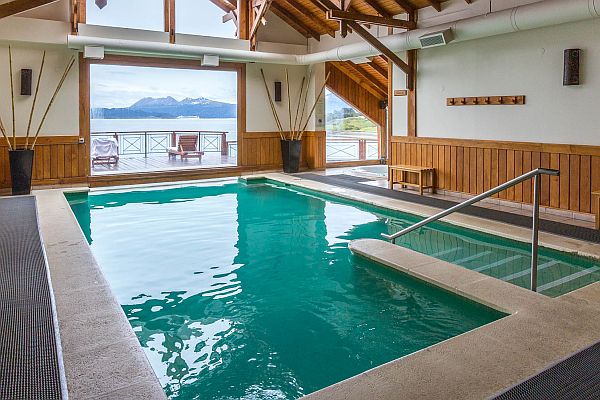 If you want to eat in one of the citys many restaurants or spend time exploring Ushuaia, the hotel runs shuttles between 9 am and midnight to transport guests between the hotel and the center of the city.

Where Los Cauquenes really shines is in its ability to show guests the natural beauty around Ushuaia, including a range of guided trips into Tierra del Fuego National Park. I took the hotel's Lapataia Tour during which guide Maria Isabela did an excellent job of explaining the features of the park in perfect English. We departed the hotel in a spotless tour van and made a stop at Ensenada Bay (one of the most picturesque and popular spots in the park), then traveled on to Lake Roca where we strolled the lake shore and had hot beverages and muffins before continuing in the van to a trailhead. We walked a short and easy trail to an overlook with views down on Lapataia Bay, then continued down the trail to the water's edge where we boarded the Akawaia, the hotel's private 16-passenger tour boat. 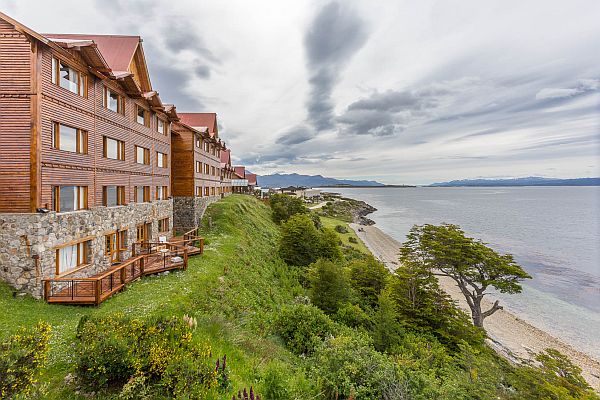 On board, boat staff were ready to serve us lunch. That included corn soup and charcuterie boards along with sodas, beer, coffee, tea, and a dulce de leche dessert. Other park visitors on the shoreline looked quite jealous as we ate on board the stylish boat.

After lunch, the Akawaia set sail back to Ushuaia Bay on a tour that included the Bridges Islands (named after three of the children of missionary Lucas Bridges), Lobo Island (to see the sea lions relaxing there), Bird Island (home to sea birds), and the Eclaireurs Lighthouse. Eventually we docked in Ushuaia where the van was waiting to take us back to the hotel and its privileged views over the Beagle Channel.