Belize: Beautiful by Land and by Sea

Belize is an English–speaking central American gem that's less crowded than Costa Rica and just as stunning. Whether by land or by sea, it will delight and surprise you. 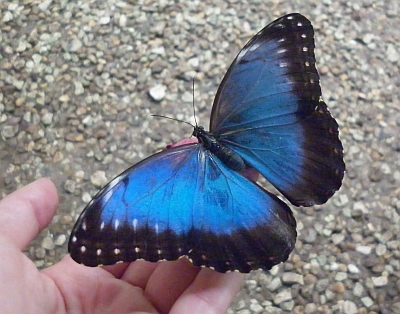 It's my first time in a tiny 12–seater plane and despite being a little bit nerve–racking, the view below is breathtaking. Bright, lightning streaks of red-clay roads cut through hundreds of miles of trees and muddied rivers. This is the first leg of my surf and turf tour of Belize and my fourth flight of the day. I started out from Mexico City, then puddle–jumped to San Salvador, San Jose, and finally Belize City, where I and the group I'm with loaded into a Maya Island Air charter flight headed to Chaa Creek Resort, a 30–minute ride into the interior of Belize.

The airport in Cayo, where we land, feels like an isolated outpost straight from "Out of Africa." We are escorted to Chaa Creek as dusk falls and are greeted with chilled towels and jamaica water. I can already feel the humidity melting my achey muscles and the night is starting to come alive with crickets and tree frogs. Chaa Creek is a 365–acre resort in western Belize established by Mick and Lucy Fleming in the early eighties when they came down to carve out their own little piece of paradise. They started with a few simple cabins for visiting friends and the place has grown to include 23 palm–thatched villas, a nature center, a medicinal trail through the rainforest, a butterfly house, an infinity swimming pool, an organic farm, horse stables, and a wood–working shop.

Into the Jungle of Belize

On our first morning the guide for the day, David, leads us on a medicinal plants hike. The property where we are walking used to belong to Dr. Rosita Arvigo, who worked with one of the last Maya shamen, Don Elijio Panti, up until his death in 1993 to catalog local herbs and trees used in traditional Maya medicine. Any cure you need can be found in the forest — along with some of the ailments. David points out which palms are used for thatching roofs, what vines hold water if you happen to be lost in the jungle, and explains how generations of rubber tappers have worked the forest. 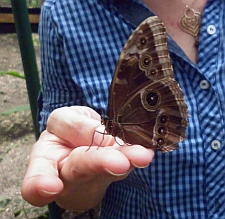 After our hike we check out the butterfly house where Blue Morpho butterflies are breeding and visit the nature center, which has a collection of local animals' skeletons, a mock Maya hut, and lots of information about the flora and fauna of the area.

After a quick dip in the pool we sit down to lunch in Chaa Creek's open–air dining room. The menu is a mix of international dishes with a Belizean flair. Belize cuisine is influenced by the Caribbean flavors brought by the Garifuna, an ethnic group that emigrated from St Vincent's Island in the 1800s, by the indigenous Maya and their corn-based diet, and by the English, of whom Belize was a colony until 1981. These three combine to produce fried cassava tortillas with shredded pork and lime cabbage dressing and vegetable stir–fries made with coconut oil and mashed plantain on the side. For Garifuna Settlement Day (November 19th), locals boil fish and spices in coconut milk and then mash sweet and salty plantains together that they use to scoop up the fish into their mouths. If only we had been there a few weeks later!

The night creatures walk is definitely the highlight of my day. Not just for the tarantulas, false–eyed butterflies and the kinkajou — a raccoon–like animal we saw high above in the canopy — but because the stars are blindingly bright out here in the light pollution–free jungle and everything around us is bathed in the noisy silence of the forest. 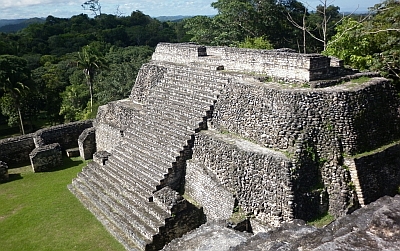 Mayan Ruins and Thousands of Acres to Ourselves 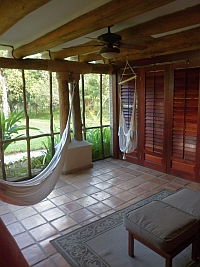 Our next stop is Hidden Valley Inn and Reserve, outside of the town of San Antonio. It's settling into dusk and the birds are calling on the tops of pine trees this time, not palm trees. The resort is an old logging camp that was bought by an American in the 1960s, converted into a 12–room resort and then turned over to a Belizean family in the early 2000s. There are only 12 small cabañas. I lucked out and got the suite — front porch, two hammocks, an outdoor shower and claw foot marble tub. The place is reminiscent of a luxury version of the lakeside cabin my family used to go to in Wisconsin when I was a child — except for wildly–colored flowers at every turn and tropical birds flitting to and fro on the grounds. On a Thursday, with a minimal staff and no other guests but our group, the quiet of the place is almost sacred. Constant activity for the past 48 hours has all of us hunkered down for a moment before dinner, enjoying the peace and tranquility. It's a little bit cooler here than in Chaa Creek — we're now 2,000 feet above sea level, freshening up before we hit the coast later in the week.

After lively dinner conversation and a few drinks in the hotel's bar, we retire for the night in anticipation of the Caracol Maya ruins tour in the morning. Caracol is a 200–square kilometer national park and Hidden Valley Inn has special permission to visit in the early morning hours before the park opens to regular visitors.