No Distractions From Nature on Glover's Reef Atoll in Belize

Story and Photos by Timothy Scott

When you get 40 miles off the coast of Belize to go kayaking with Island Expeditions, you say goodbye to the grid and exchange a buzzing phone for lapping waves. 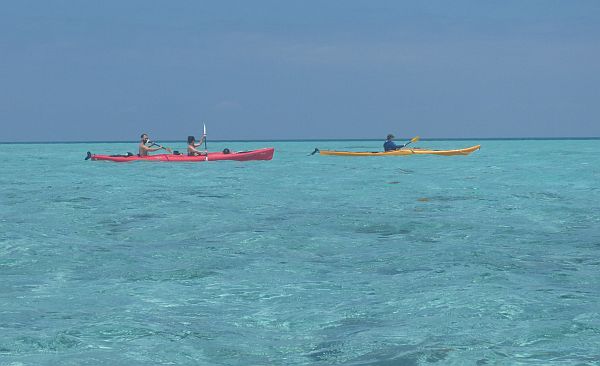 To my left was a reef poking up from the sea, covered with mollusk shells and barnacles, with waves crashing across it as they roll in. To my right was an expanse of shallow, aqua blue sea, stretching as far as I could see. Ahead of me in the distance was a small island with palm trees poking up, the base camp I'll eventually get to. And when I looked down, there were always fish, sometimes coral, and occasionally an eagle ray swimming right by the kayak.

These are the images still burned into my mind after spending five days off the grid about as far our as you can get in the Caribbean and still be in Belize. With an excursion to Glover's Atoll, you can almost feel your heart rate dropping and the stress melting away as the busy work life thoughts refuse to follow you out to sea.

My journey didn't start out with blue water extending to the horizon, however. I spent some time on land first at Bocawina Rainforest Resort. I would be working my paddling muscles later out on the water, so here I took a couple serious hikes around the nature reserve. 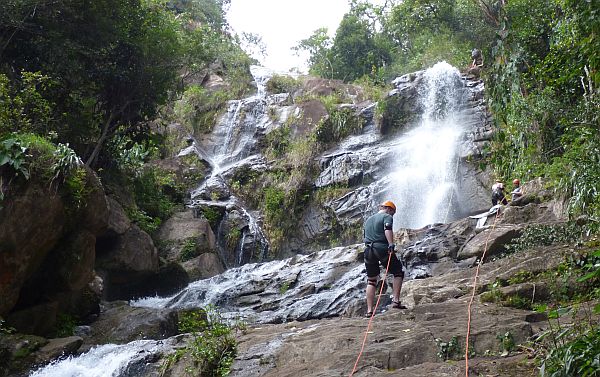 "We're headed to that waterfall up there," one of our guides told us, "then we'll rappel down it from the top." My week of adventure was going to start out with a real challenge. We crossed a creek and then followed a trail up the side of a mountain. In the humid heat of Belize, it didn't take long to work up a real sweat and the thought of getting doused by a waterfall sounded more attractive the higher up we got.

After enjoying a stunning view of the area from the top point, we got a nice surprise: a natural pool to swim in before the hard part started. Already wet, we clipped in and descended the rock face with the help of two guides—one at the top and one at the bottom. It's a scary feeling to start walking backwards down a steep and sometimes slippery stone wall with water rushing over you. With concentration though, we all stepped our way down and gave high-fives at the end.

That night, with just the sounds of the tropical birds outside the window of my suite, I enjoyed the kind of sleep you only get after a day of real exertion. 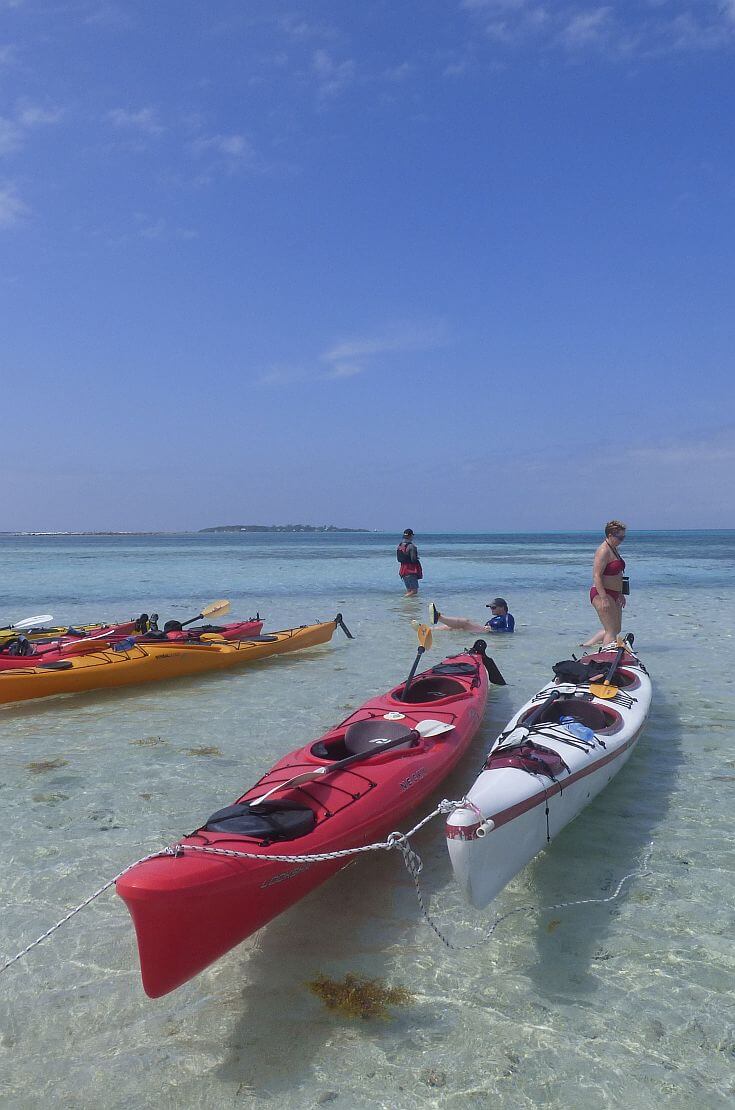 Off to the Caribbean Atoll

After breakfast the next morning in the excellent farm-to-table Wild Fig restaurant, my driver transported me to Dangriga to meet up with my fellow island hoppers, vacationers from the USA and England. We put on our sunscreen and hats to get ready for the hour or so in the boat it would take to get out to the remote Glover's Reef Atoll.

On the way we passed Tobacco Caye, where Island Expeditions has a camp, and made a stop at Southwater Caye, where they have another. The company is the only one offering island-to-island kayaking journeys in Belize, using these camps for the overnight stays. We had all made the choice to go out as far as possible though, so we continued on to the atoll.

Glover's Reef Atoll is well beyond the better-known long barrier reef that is a short hop from Ambergris Caye. As a result, few other tourists make it out this far. It's a roughly rectangular collection of tiny islands and long reefs poking out of the water, looking from the sky like a submerged bulging box with the lid open. Outside its walls, the bottom of the sea sloped down deep, while inside the atoll the water is shallow enough for standing in many spots. 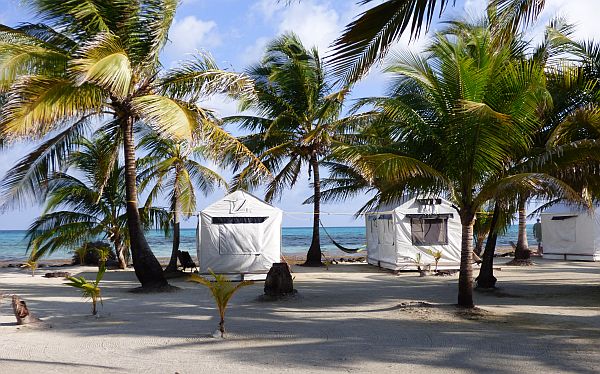 We came looking to get close to nature and leave the modern world behind. With that as the goal, the Island Expeditions camp looks like an answered prayer. There are gleaming white waterproof tents on wooden platforms with simple beds and nightstands inside. A gas lantern provides the flickering light at night. Each has a porch with chairs for reading a book or just looking out at the sea. Out here the word "online" refers to the snapper fish you're pulling in. There's one weak satellite internet signal at a resort bar on another part of the island if there's a need to check in. In our camp, however, we're blissfully isolated from the information overload of life back home.

Our big Belizean guide Michael gave us a tour of the place, from the composting toilets and shared showers to the big main building that would be our dining hall and social center for the five days. There was nothing pretentious or fancy about the place, but we didn't come here looking for bath butlers, room service, and aromatherapy. We came for some of the best snorkeling in Central America and the chance to explore the reef by human-powered kayaks. This is a low-impact trip where captured solar power feeds the dining room lights and there are no TVs in sight. Our body clocks could adjust to the circadian rhythms of the rising and setting sun. There's something calming about getting up at sunrise and the sea stretch out in front of you, a heron standing patiently by the shore. 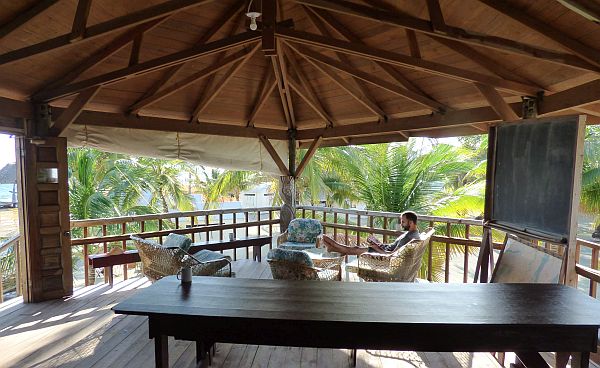 After the tour and a late lunch, we got a lesson in open-water kayak mounting, which turned out to be a good ice-breaker. There's no way to launch yourself into a kayak gracefully from a treading-water position. After a change into dry clothing a bottle of rum appeared for happy hour, we lazed around the camp, and then dinner conversation ended with a talk about what we'll be doing the next few days.

There's no set itinerary for the five days of adventure on Glover's Reef Atoll. There's a general plan for when the skies are clear and the winds are calm, but we didn't have the benefit of the latter at first. There was a strong wind coming in west from the Atlantic, making small waves inside the atoll and stirring up sand on the bottom. They are used to adjusting on the fly, so we packed up the coolers and went fishing. 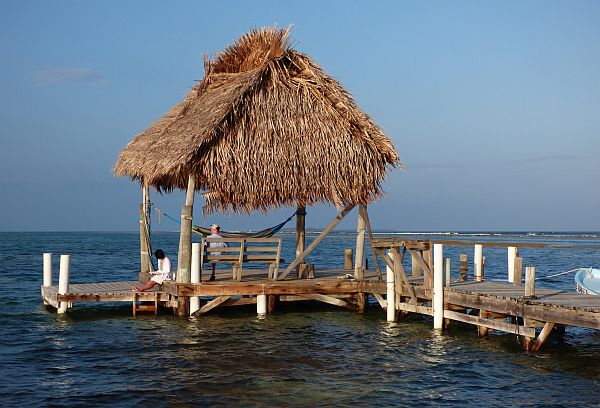 Because of careful negotiations between the government, environmental groups, and fishermen, there are detailed restrictions on fishing in this UNESCO World Heritage marine reserve. There are certain species that are totally off limits, while others can be removed from the water only at certain times of the year. A large section of the atoll is permanently closed to fishing, including most of the shallow parts within the reef, so we headed north to the one part where we could drop in our lines.

Drop them in we did, without casting from a fishing rod, just lowering them and raising them by hand. I didn't have high hopes for this method since we were literally just throwing hooks with bait on the end of fishing line over the side of the boat. With ten of us doing this at the same time, the idea that we would catch our dinner seemed doubtful.