Surprisingly for a city that attracts politicos and execs from around the world (if few tourists), Brasília possesses only one serious luxury hotel. As fabulously futuristic as the city’s legendary architecture, and blessed by an idyllic, if somewhat secluded, location on Lake Paranoá, the Royal Tulip Brasília Alvorada is easily the best – and some would say the only – place to stay in the nation’s capital. 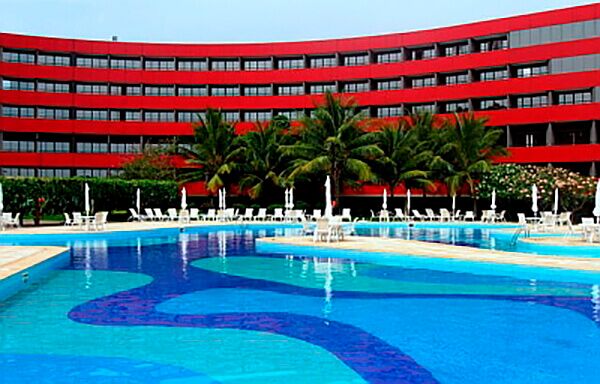 Arriving in Brasília for the first time is a surreal experience, especially when your taxi is zooming down the Eixo Monumental, the vast thoroughfare lined with Oscar Niemeyer’s gleaming Space–Age fantasies. Heading towards Lake Paranoá (a body of water—even an artificial one—is a welcome presence in a capital known for its dry heat and red dust), a sudden swerve provides a fast glimpse of the elegant Palácio da Alvorado, official residence of the president, before the taxi dives into a short tunnel. Emerging, you’re brought to a sudden, jaw–dropping stop in front of a gigantic, curvaceous space ship, paneled in glistening lipstick red… which turns out to be the entrance to the Royal Tulip Brasília Alvorada.

It’s fortunate that there are many valets to grab your luggage: you’ll need your hands free to rub your eyes or pinch yourself, anything to ensure that you’re not dreaming when you walk into the immense glass and marble lobby. Accessorized with sculptures that turn out to be tables and chairs, it resembles a vignette from a (very well designed) Jetsons episode. The official inspiration of the lobby – “a Zeppelin floating above a garage” – serves as an apt description. 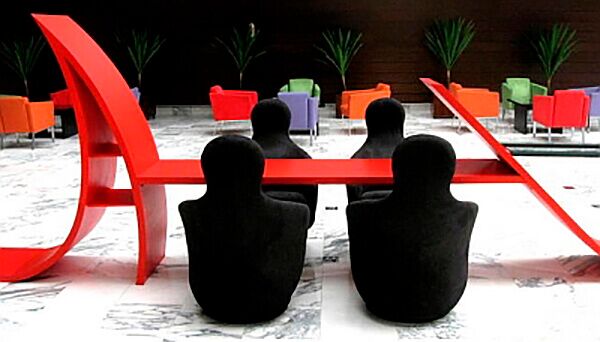 Suffice it to say that this 375-room hotel – Brasília’s one and only 5-star – is the brainchild of vanguard Brazilian architect Ruy Ohtake (the man behind São Paulo’s Hotel Unique). His futurism pays clever homage to Niemeyer’s modernism, especially in the rooms (all of which sport large–scale Niemeyer drawings above the beds) where furnishings are appropriately spare, modular, elegant pieces fashioned out of precious Brazilian woods, white marble and black leather.

The small–ish standard and superior rooms tend to attract visiting business execs who just want a comfortable place to crash during the week; the hotel offers over a dozen meeting rooms and a business center as well as Wi–Fi in the lobby and free cable connections in the rooms. Vacationers (still a rare breed in Brasília) seeking room to move around and relax in should opt for the deluxe rooms or suites. The former boast sizable balconies, outfitted with beach chairs, which overlook the pool and the lake. With similar views, but smaller verandas, the suites possess spacious living rooms (partitioned off from the bedroom by sliding wooden doors), a closet/dressing room, and a pair of sleek marble bathrooms (the only drawback is the fans that sound like stove exhaust systems).

Those with money to burn, who are prepared to die and ascend to contemporary design heaven, can check into one of two presidential suites; vast apartments whose various rooms (including dining areas, offices, and private kitchens) are beautifully decorated with pieces signed by the likes of the Campana brothers. The “presidential” designation is particularly apt; 90 percent of visiting heads-of-state lay their heads on these perfectly plumped pillows. Unlike Rio and São Paulo where dignitaries and luminaries have various luxury hotels to choose from, in Brasília it’s the Royal Tulip or nothing. You’re also likely to run into government ministers, and even the President and his posse, who use the private rooms of the English pub, The Old Barr, as their clubhouse. 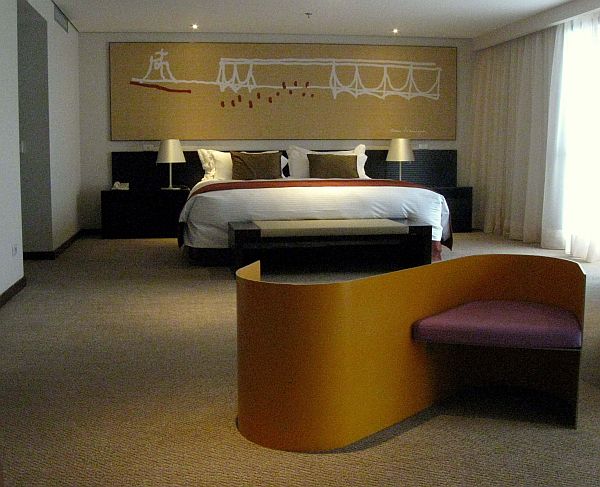 Aside from the pub, whose cozy, burnished atmosphere seems like another world in comparison with the sleek futurism that otherwise reigns, there are plenty of places to relax, one of the most alluring being the free-form swimming pool facing the lake. Landscaped with palms and scented frangipane, and serviced by the Capitan Bar, this is where all the action goes down and the reason you’ll feel blessed that you’re not staying in the arid center of town. Despite the relative isolation, you’re actually only a 10-15-minute taxi ride away from most tourist sights (a free shuttle leaves hourly for the Eixo Monumental).

Other amenities include a private pier, tennis courts, a large and well-equipped gym, and a less–than–inspiring spa. Offering a whirlpool, sauna, and massage treatments, this basement space is surprisingly drab with high-school style locker rooms. The good news is that, in anticipation of Brasília being one of the host cities of the 2014 World Cup, the Royal Tulip Brasília Alvorada is already undergoing some serious transformations, one of which is the spa, currently operated by a third party. Another is the main restaurant. While the setting itself is striking, the menu offerings are surprisingly bland. It’s encouraging to hear of plans to hire a chef with some culinary pedigree and a more creative bent. Until then, foodies might want to nip next door to the landmark Brasília Palace hotel whose newly revamped restaurant, Oscar, is considered one of the best in town.

Unlike some luxury hotels in Rio and São Paulo, the Royal Tulip eschews formality for a pleasant element of casualness. If one offshoot is that service – which in general is professional – is lacking in personal attentiveness when it comes to details, the upshot is an atmosphere conducive to relaxation; a definite bonus in a city that’s not exactly known as a chill-out destination.

Review and photos by Michael Sommers.