The Copacabana Palace opened in 1923 as the city's first luxury hotel and it has been welcoming the rich and famous ever since. It still stands far above all Rio competitors in terms of facilities, dining, and attention to detail. 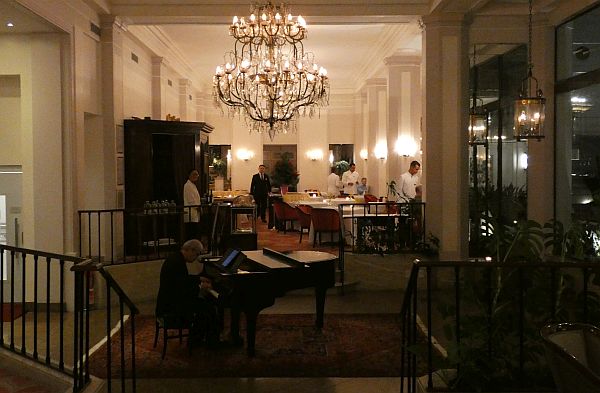 The Copacabana Palace's stately Mediterranean-style structure sits a little bit back from busy Avenida Atlantica, allowing guests to appreciate its elegance. It's as if it is making sure you notice that it occupies some of the most expensive real estate in Brazil. It stands in stark contrast to the jammed-in, blocky structures that can't afford to sprawl with such leisure and devote space to a grand entrance, especially when illuminated at night.

Doormen offer a formal welcome as you enter the reception area, which is larger than it used to be before renovations this decade opened it up and restored the original ceiling. Although diminutive compared to the other public areas in the hotel, it is still elegant, with well-dressed staff behind desks on either side tending to the business of registration and guest relations. You are offered some kind of cold drink, but there is no place to sit until you climb a wide stairway to the elevators. These stairs can be an obstacle for some, but they're staying put in this National Heritage building, so staffers are on hand to assist anyone with limited mobility and to get all luggage up to your room. 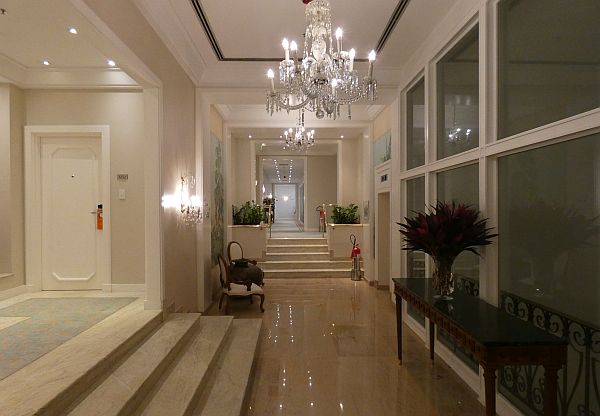 Designed by French architect Joseph Gire and inspired by two hotels on the French Riviera, the Copacabana was started by the Guinle family of Rio de Janeiro and sold to James B. Sherwood of Orient-Express Hotels in 1989 (rebranded Belmond hotel group in 2014).

Since its opening it has undergone extensive yet discreet renovations and is regularly in a state of evolutionary refinement. The most recent changes were a revamp of the swimming pool area—which is the largest by far among the luxury hotels here—a restaurant change, and spa upgrades. The Copacabana Palace Spa features treatments derived from Brazilian ingredients in five treatment rooms, as well as a well-equipped fitness room, hair salon, sauna, steam bath, and relaxation area.

The main building holds 145 rooms in a variety of configurations. The Tower Building, added in 1949, holds another 94 suites and rooms. Many rooms have great views of the beach and its 2.5 mile-long wavy sidewalk mosaic. Book far ahead for holidays: a Copacabana balcony is the place from which to view the spectacular New Year's Eve fireworks. 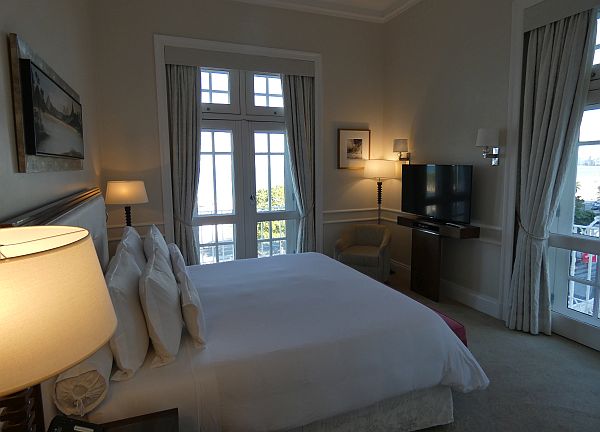 The sixth floor of the main building is where the many rock stars, movie stars, and heads of state who check into the Copacabana Palace hotel stay. The floor houses just seven penthouse suites, all more than 1,000 square feet before being combined, and six of them have fabulous views. This floor requires its own key and has its own butler service, as well as Murano glass sculptures and other original art in the suites. It's especially good for avoiding paparazzi since the floor offers its own private rooftop pool that is shielded from the eyes or cameras of other buildings nearby.

Spacious and bright hallways have plush carpeting. All rooms have high ceilings and are decorated in classical European style with printed fabrics and Persian carpets. The dﾃｩcor is elegant and traditional without being fussy and the neutral colors and whites keep the quarters feeling light. Artwork presents historic scenes from Rio's past. Outlets are plentiful and easy to reach—often a downside of historic hotels—and the included Wi-Fi works well. Despite all the technology, we're pleased to note the windows actually open to let in the ocean breezes. 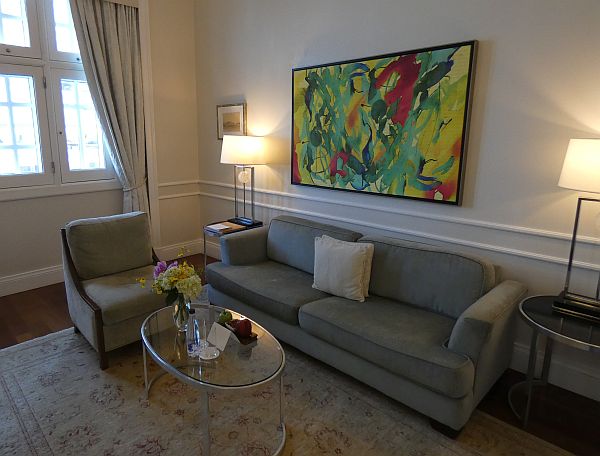 Amenities are numerous here, from embroidered robes, slippers, and flip-flops to large electronic safes and minibars. Spacious marble baths vary depending on the room category, but are well-equipped with everything you'd expect in the city's top luxury hotel. The top rooms to book are the ones facing the beach from the main building, but the annex ones also have a view of the ocean over the pool.

If you wish to be on the beach, head for the area reserved for Copacabana guests. Here the staff will get you a reclining chair with cushy mat and towels, bring water and fruit, and watch your belongings. There's even a shower built on the sand. 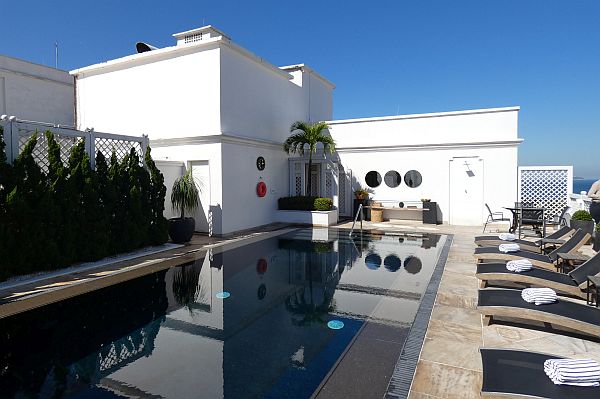 The hotel's public spaces are the stuff of legend. Soaring ceilings—some 21 feet high—stately columns, crystal chandeliers, and marble or hardwood floors could no doubt tell tales of love, intrigue and celebration. Three beautiful rooms across the front of the building offer 12,000 square feet of entertainment space when opened up. Naturally it's a popular spot for high society weddings. A 5th floor executive lounge can provide private or group check-in so guests are able to bypass front reception. 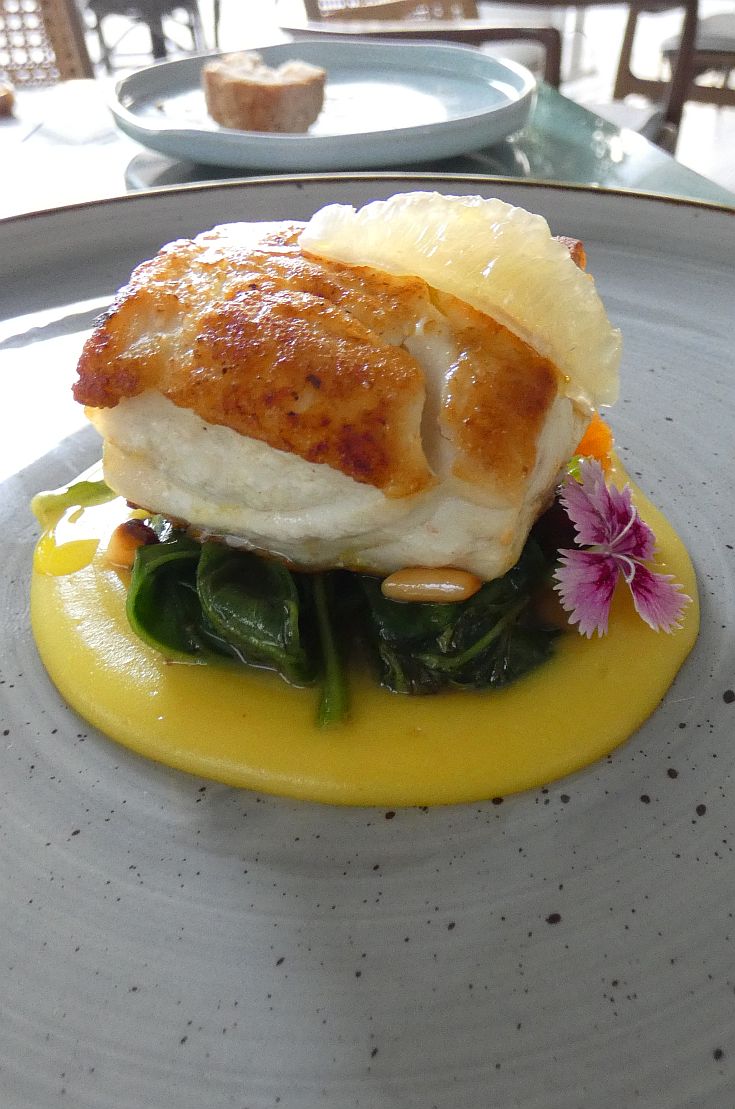 Photos of notable guests line the 4th floor hallway and are a who's who of historic and pop culture faces from the past century. In the 1920s and '30s, guests were often European nobility. But, after Fred Astaire and Ginger Rogers brought fame to the hotel in the 1933 film, Flying Down to Rio, Hollywood discovered it. Nearly everyone who has been a marquee star in Hollywood seems to have stayed here. Other notable guests have included royalty, touring musicians, world leaders, sports stars and CEOs.

Food and beverage service are exemplary throughout the hotel and the restaurants are always buzzing with guests and upper-crust Rio society. Belmond Copacabana Palace revamped the poolside P&eaccutergula Restaurant a few years back in collaboration with London-based Muza Lab, featuring an all-day dining concept celebrating the city's carioca spirit. The seasonal and locavore-focused menu changes every three months. The creative chef delights in presenting even the humblest dishes with a visual flair.

The Hotel Cipriani Restaurant is an oasis of elegance at the entrance to the tower, with a piano player or jazz trio in an attractive traditional space beside the pool. The Continental menu has a strong Italian slant, but also an array of local seafood and Wagyu beef.

While that restaurant harks back to old Europe, the hotel's MEE restaurant gets the most local buzz. Featuring pan-Asian fine dining and a thoroughly modern décor, MEE has been awarded a Michelin star four times. 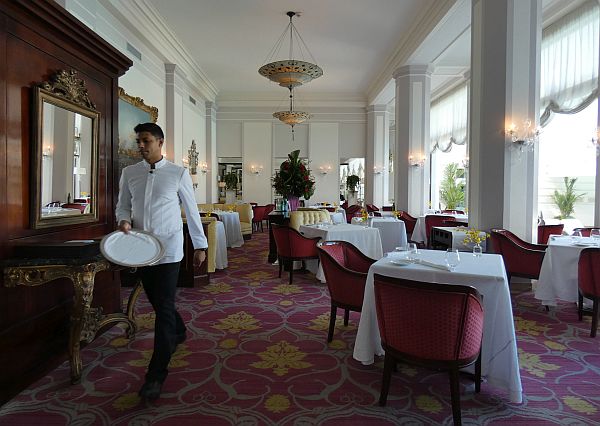 The Copacabana Palace Hotel in Rio presents a traditional face and personality that is the opposite of the standoffish trendiness favored by the Fasano and Emiliano, with a high staff-to-guest ratio and expansive public spaces. It appeals to a moneyed crowd that values personal service over attitude and art.