Touring Brazil’s Fernando de Noronha from Above and Below

When you tell a fellow Western traveler you’re going to Fernando De Noronha, you’re most likely to be met with a blank expression. Tell a Brazilian that’s where you’re headed though and you’ll hear a short sharp intake of breath followed by declarations of envy. 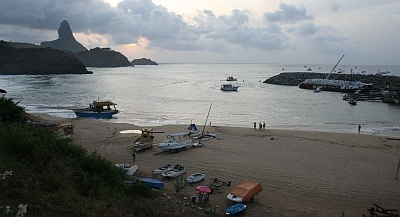 Many times in Brazil, I’m told that the small archipelago of islands is the most beautiful place in Brazil, a country with no shortage of natural wonders vying for that title. Those who’ve been here will share memories of dolphins leaping among waves, laidback walks on deserted beaches and scuba diving in protected waters teeming with sharks, turtles and other marine life. Brazilians who haven’t yet been hold the place up in their imagination as an unspoilt paradise topping their wish–list of places to visit someday. 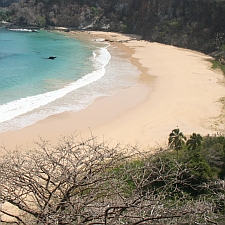 If the rest of the world hasn’t heard of it, it might be because Brazilians are trying to keep it secret. But it also has much to do with the fact that this isn’t an overly commercialized mass tourism destination. They take conservation of the land and sea ecosystems seriously here. Visitor numbers are limited to 420 per day. Flights to the island, far off Brazil’s northeast coast, are quite expensive. There’s an additional Conservation Tax that visitors are required to pay, the daily rate increasing the longer you stay (currently equating to USD$23.60) per person per day, $146.15 per person for seven days). All of which means Noronha has steered clear of being overrun, remaining instead an isolated exclusive idyll for luxury travellers, honeymooners and those treating themselves. This means, for now, the islands retain their laidback, easy–going island feel. 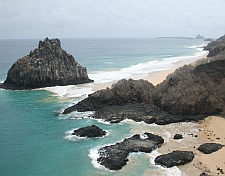 I know I’ll like it from the moment I see white waves breaking along the shoreline and cliffs of the archipelago from the plane. We fly low over bays where clear greenish water breaks gently on pristine and beaches, areas of palm trees and mangrove forest.

The main island is small (17 square kms) and it doesn’t take long to get to my hotel. I stay at the newly opened Pousada Triboju, one of only a very few (but slowly increasing number of) top–end hotels here. There are only four suites and four bungalows. I take one of the spacious airy bungalows, which reminds me of African–safari style lodges. Hammocks, mattresses, and deck chairs are arranged on the terrace, which has views of the striking Morro do Pico, a 321–meter–high pinnacle of rock that dominates the island. The hotel’s pool is quite small, more a giant hot tub than something to do much swimming in.

Very accommodating staff serve up a neatly–presented breakfast of fresh fruits, yoghurt and cereal, bread and pastries, an omelette, and tea. Then I set out for a coastal walk with my local guide, Patricia. We head out to Mirante dos Golfinhos (Dolphins Bay). Fernando de Noronha is famous as a home to large populations of Spinner Dolphins. From the high vantage point of the cliffs, we can see several boats used for dolphin–spotting day trips out on the ocean. A few local girls sitting at a viewpoint tell us 200–300 dolphins swam through this way earlier in the morning. 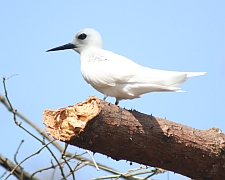 We see plenty of birdlife. Frigatebirds soar over the ocean, while in the trees there are Noivinhas (known as Little Brides for their white coloring) and Black Noddys (called The Widow, because of their black coloring). Noronha’s isolated position, out in the Atlantic ocean, 200 miles from the Brazilian mainland, makes it attractive to migrating birds, as well as the creatures that fill the surrounding oceans: dolphins, sharks, rays and turtles. A local conservation project has succeeded in preserving and increasing turtle numbers here.

That same isolation once made the island useful for another purpose. Noronha was previously a prison, Patricia tells me as we hike along the cliffs. “When you think of the isolation here, a piece of land in the middle of the ocean, naturally it could be a prison,” she says. “This island used to be called the Bad Island, the Devil’s Island. The history talks about isolation and suffering. Before it was a hell, now it’s a paradise.” 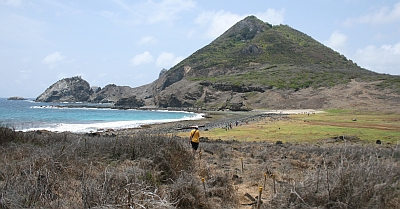 We walk to Baia do Sancho, a beautiful bay, the beach surrounded by high cliffs. It’s often voted one of the world’s best bays, Patricia tells me. As we climb down a ladder system in the gap between the craggy rocks and walk along the beach, the benefit of this island’s exclusivity is clear. “In the Caribbean or Cancun, places like this, you have the big structures on the front and the crowds,” Patricia says. “In Noronha, it will never be like this. There, you don’t have the contact with nature.” The luxury of Noronha is this laidback feel, without crowds and noise, the feeling of space and quiet.

We eat lunch at Pousada Maravilha, which has long been regarded as the best hotel on the island. The staff are attentive and friendly; like Triboju, all of them speak perfect English. This is common in the island’s top restaurants and hotels, but not so easy to find on day trips and standard tours. The rich waters around the island provide fantastically fresh seafood. Here, I eat tangy fish ceviche with bite, followed by a main of tuna in creamy coconut sauce. The location is hard to beat, outdoors next to the elegant infinity pool, with a view of the bay of Baia do Sueste and the Atlantic Ocean.

I go out scuba diving in the afternoon with Atlantis Divers, said to be the best on the island. They were the first company in Brazil to be awarded the Certificate ABNT Safe Adventure from ABETA (Brazilian Ecotourism and Adventure Tourism Association) for security and environmental practices. They also use a catamaran, rather than a standard dive boat, which is a smoother ride – helpful on these churning choppy waves which can cause queasiness.

I was a little disappointed with the company. It’s the first time in years of diving that I’ve boarded a boat without a welcoming enthusiastic divemaster or instructor shaking my hand, introducing himself, asking my name, where I’m from, diving experience and so on. English is spoken here, but I had to go and seek out a person who did to answer a few queries. Likewise, there was a bit of a shortage of information, such as whether my gear had been loaded onto the boat; usually that’s all confirmed before departing. 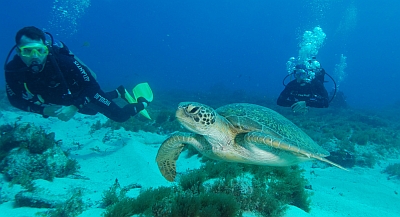 The catamaran took us out towards the first dive site, Pedras Secas II (the dry rocks). The rocks protruding from the ocean are the same ones said to have caused the wreck of a Portuguese exploration vessel in 1503, which led to the accidental discovery of these islands when the survivors were forced to come ashore. Below the surface, those rocks contain interesting shapes and features, caves and swim-through tunnels. “Life is good and plentiful in these waters,” the dive leader Juan tells me, but more than the marine life that we can expect to see, it’s the underwater landscapes that make Noronha special for diving.

We haven’t been under long before we spot a large Green Turtle swimming past the shoals of colorful tropical fish. One of the dive instructors, Daniel, tugs my arm to direct me to a cave in the rock where there’s a 2–3 meter nurse shark, which looks like it’s resting.