It's a topsy–turvy world in the hippest possible way at this daring hotel that's stood the test of time—and you don't have to be a celebrity guest to appreciate it. 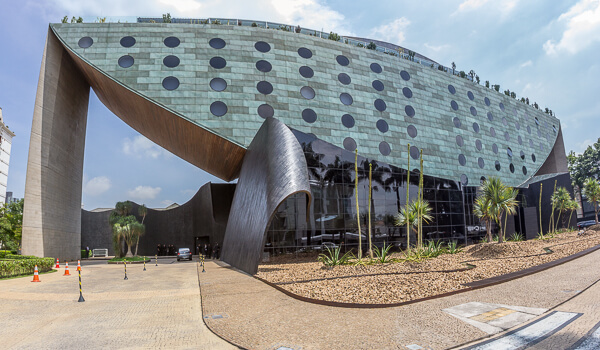 Many people think the iconic Hotel Unique is supposed to look like a ship. However, Brazilian architect Ruy Ohtake says he designed the hotel as an upturned arc to avoid using straight lines which he considers unbearably predictable.

There is very little that's predictable at the Hotel Unique.

Guests enter through massive doors which appear to be made of metal but are actually made of a lightweight fiber since no hinge in the world would hold the weight of metal doors that big. Instead of a signature cocktail or glass of fresh juice guests receive a flute of Vueve Clicquot at check in along with a bowl of traditional Brazilian sweets (or fresh popcorn on Fridays) to nibble from.

The enormous lobby fits the scale of the doors. Unlike most hotels which cram their lobbies with furniture meant to create cozy nooks which guests rarely utilize, the Hotel Unique lobby celebrates open space. Floor to ceiling walls of windows and a ceiling that rises dozens of feet above the lobby give the feeling of possibility. It's a space for thinking and creating. 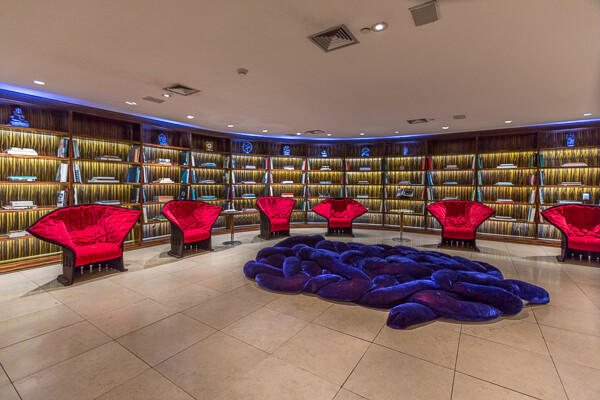 The carefully curated furniture that has been placed in the lobby asserts itself with crisp angles, demanding colors, and unexpected forms. Staff buzz around in smart uniforms designed by Brazilian designer Alexandre Herchcovitch. I saw staff in two different versions of the one each day of my stay. Many staff members speak strong English (not always a given, even in Sao Paulo) and after six months on the job, sales and service staff stay in the hotel as guests to help them better understand service from a guest's point of view.

Still owned by the Siaulys family, the patriarch's son, Jonas, is now in charge. An avid surfer and music lover, you can thank him for the massive black concrete wall in the faﾃｧade of the hotel that somehow "breaks" like a wave. He also signs off on all of the music played in the hotel and is responsible for the speakers in the pools.

Sound isn't the only human sense that the hotel plays with. The elevators, for example, are almost completely dark inside creating a momentary environment where sight is diminished (Jonas' sister is sight impaired). Halls are dimly lit too and scent is used throughout the hotel (a spray bottle of Hotel Unique fragrance is a take–home amenity). The sense of touch is engaged in the contrast of plush carpeting and rough walls. 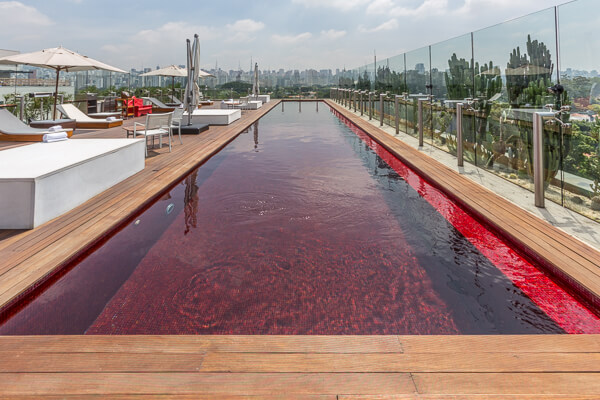 The hotel also has one of only a handful of spas in Latin America that are operated by Caudalie a vino therapy skincare company. The larger–than–average gym is stocked with a comprehensive array of TechnoGym equipment including two treadmills. One of them is placed on a glass floor over the indoor pool, which is primarily accessed via a playful waterslide. There are free weights, stationary bikes, and strength machines, as well as two dry saunas and two wet saunas.

A second pool is located on the roof. It's lined with small red tiles which are meant to make the long, lean lap pool look as if it's filled with red wine. This pool, and the small deck around it, is part of the Skye Bar and is often crowded with guests and outside visitors (hotel guests are always given priority). Most bar patrons prefer the spectacular outdoor space, but if the weather is bad, guests crowd into the small inside space where the noise level, unfortunately, gets very, very high.

Unlike every other hotel I've stayed at in Brazil, the Hotel Unique breakfast (included in some room packages) is not served as an opulent buffet. Instead, all of the elements of a Brazilian breakfast buffet are brought to your table including fresh juice, coffee or tea (bottomless), yogurt, fruit plate, bread basket, jams, butter, and eggs to order. The food was delicious, particularly the house made pastries, but it was often hard to get a waiter's attention and one morning I sent a plate of scrambled eggs back three times before they were cooked as I'd ordered them. 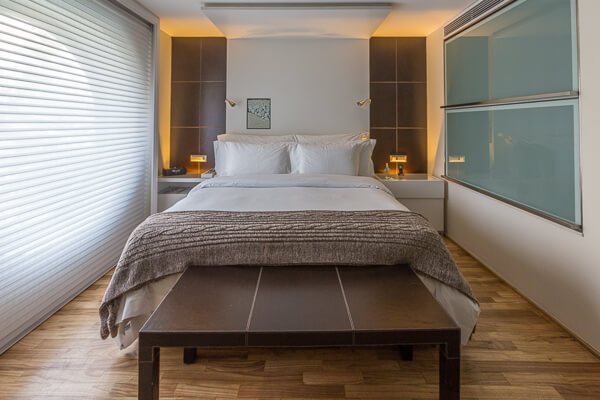 Standard rooms are on the small side (starting at around 350 square feet), but all feature a frosted window that opens or closes to connect bathroom to bedroom. Each is stocked with Bulgari amenities, a Nespresso pod coffee maker that was designed for the hotel (a former Nespresso exec is on the hotel's board), a huge round window that opens a bit for fresh air, a rain–shower head shower, and a jetted tub with a clear plastic bath tub pillow filled with green feathers. Every guest at Hotel Unique also receives a pair of white Havaianas flip flops, one of Brazil's most beloved brands (you'll be asked for your shoe size when you book).

However, the hotel's 10 suites, which occupy the far ends of the hotel that curve steeply upward, are stunners. The Rodeo Drive Suite, for example, has a wood floor that continues up the curved wall, a big living room and a large bedroom with a large jetted tub. The hotel's 3,360 square foot presidential suite, called the Oasis Suite, was renovated by Brazilian interior architect João Armentano in 2016. Due to building restrictions around the hotel, it is the only rooftop suite with a panoramic view of the Sao Paulo skyline and it has two entrances including a private elevator. 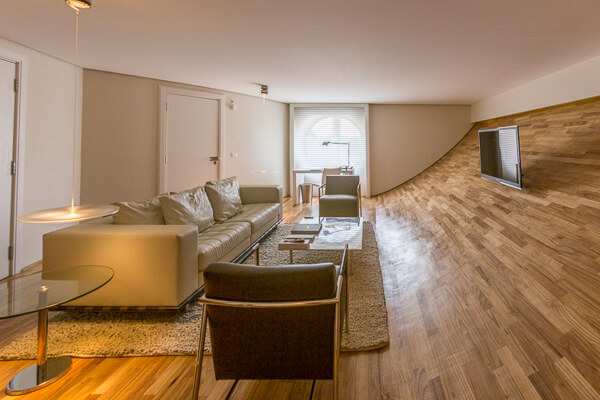 Suites like that, and the hotel's general air of hip discretion, attract politicians and celebrities. This helps explains why there are more than 3,000 security cameras in the hotel.

Hotel Unique opened in 2005 and Sao Paulo has matured a lot in the ensuing years, with sophisticated restaurants and a bevy of newer hotels upping the game significantly. However, Hotel Unique's unpredictable approach still feels relevant, modern, and accommodating, particularly for guests willing to go along for the ride.

Review by Karen Catchpole and photos by Eric Mohl.