Excursions in the Atacama Desert of Chile

Story and photos by Charyn Pfeuffer

What used to be called "the driest place on Earth" (until it flooded twice in the past decade) may not sound like an ideal spot for a luxury vacation, but the Atacama Desert region is surprisingly one of Chile's tourism jewels. There is plenty of adventure activity for all levels to keep you occupied in this alien landscape. 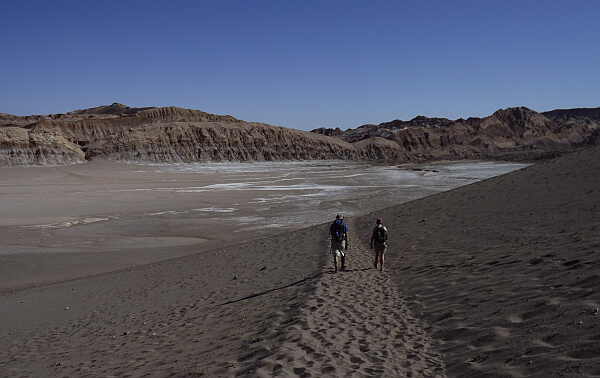 Here are seven "don't miss" excursions, as well a recommended trip coordinator you must experience while visiting the Atacama Desert. In many cases, you must be a guest at the mentioned hotel to participate in the excursion, but there are similar excursions at other offered properties. Once you've explored the natural beauty and geographic wonders of this region, you may never want to leave.

Chile has the clearest skies in the southern hemisphere, and is considered by many scientists as one of the best stargazing locations in the world. It's for this reason why San Pedro de Atacama was the chosen site for the largest ground-based astronomy project, The Atacama Large Millimeter/submillimeter Array (ALMA), an international collaboration between Europe, Japan and North America in cooperation with the Republic of Chile. Under the concept "astronomy for all," guests at explora Atacama can soak up the beauty of the stars, planets, and constellations with the hotel's huge Meade 16" f/10 LX200R Advanced RD Telescope. Housed in a space age-sleek observatory dome just steps from the main building, astronomical highlights such as the Southern Cross, the Clouds of Magellan, and two irregular satellite galaxies of the Milky Way are now within stargazer's reach. 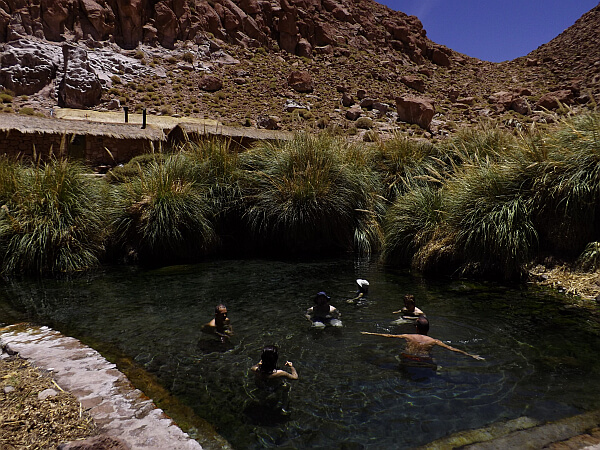 The Thermal Springs of Puritama (indigenous word for "hot water") are situated approximately 19 miles north of the main village at an altitude of 11,398 ft. They were discovered centuries ago by local residents, but a few years ago were opened to the public, with walkways and changing rooms. It's possible to arrive via vehicle (private or rented car, no public transportation), but far more interesting to hike along the canyon floor from Guatín to the springs on an organized excursion, especially when that means a table of food, juice, and wine set up on a deck by one of the pools. The hot springs were closed for a year after local flooding, but opened up looking better than ever in late 2012. Then they closed again in 2019 after another flood, so check the current situation before making plans.

At Tierra Atacama, guides lead the semi-strenuous trek heading uphill over uneven landscape, taking hikers past foxtails, cacti, and brightly hued igneous rock formations. After working up a sweat, participants are rewarded with warm (91.4°F), therapeutic waters that are said to combat an array of ailments.

Go: tierraatacama.com or the explora link above. 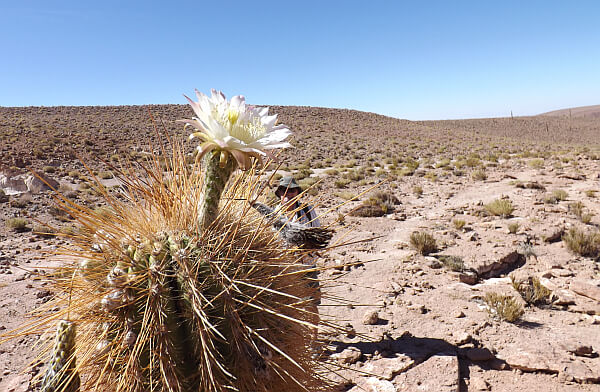 Awasi is one of the few properties offering guided tours to Zapur and the guide they set you up with will know it well. For visitors interested in the life and history of the local communities, this excursion starts with a tour of an incredibly green canyon that miraculously appears in the middle of nowhere. Down this canyon runs water that comes from the Andes Range. Walk from Tambillo, an area lush with Tamarugo trees to reach Zapar.

Few tourists are fortunate enough visit this important archaeological site. In pre-Colombian times, Zapar was an important enclave linked to the Quitor Puakara. 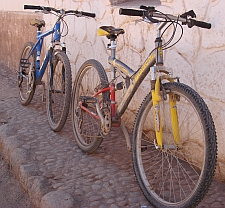 Photography buffs swoon for the panoramic views of the Andes Range and the Catarpe Valley found atop the highest point of the Salt Range. Vulcano Expediciones' excursion is perfect for those who seek a spectacular communion with nature. The half-day adventure takes riders along the cornices toward the north and an ancient tunnel leading to Calama. From there, cyclists descend through the cornices to Death Valley, before returning to San Pedro de Atacama. 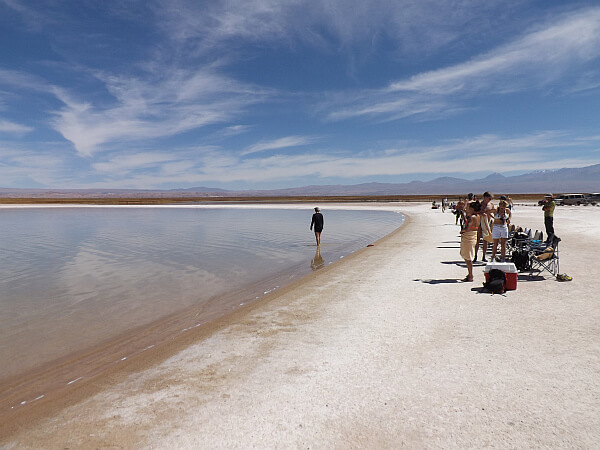 Explora and Alto Atacama Resort both run biking trips that head out of town to the Cajar Lagoon, an extra-salty lake where you can jump in and float on top regardless of your normal buoyancy. The driver of a support van sets up director's chairs lakeside with food and drinks, then takes you back after loading up the bikes. Of course you can rent your own bike in town and go exploring for the day. Just bring plenty of water!

Explora set the standard in San Pedro de Atacama for arranging excursions, and are among the best with what they offer and how they operate. What sets explora apart, besides the greatest number of excursions and guides, is 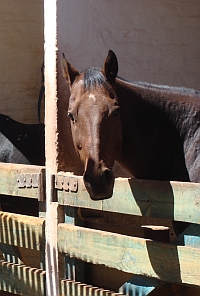 its equestrian program. They have a whole stable of horses on site. Their horseback excursions are designed primarily for people with riding skills, although instructors are available for beginner riders wishing to learn.

After a few early morning lessons, skills and comfort level are evaluated and guests may be ready for a horseback riding exploration. For those who know how to trot and/or gallop, explora has the finest Chilean and English saddles, leather gaiters, and helmets.
Go:explora.com/atacama or (866) 750-6699; atacamahorseadventure.com or (56-55) 851956

Frequently compared to surfing, sandboarding beginners will want to enlist the expertise of an instructor. Atacama Expeditions offers guided trips to Chile's Death Valley led by pro sandboarders. Participants are shuttled to Death Valley, where they must hike uphill to the top of a massive dune. There, boards slightly shorter than a standard snowboard are waxed before being strapped on. Lean back, feel the speed and remember to keep your mouth closed—tumbles are inevitable.

If you're going to rent a board and go solo, be sure to go early to avoid the extreme sunlight and heat, or much later when temperatures cool, preferably with a full moon for an unforgettable experience. 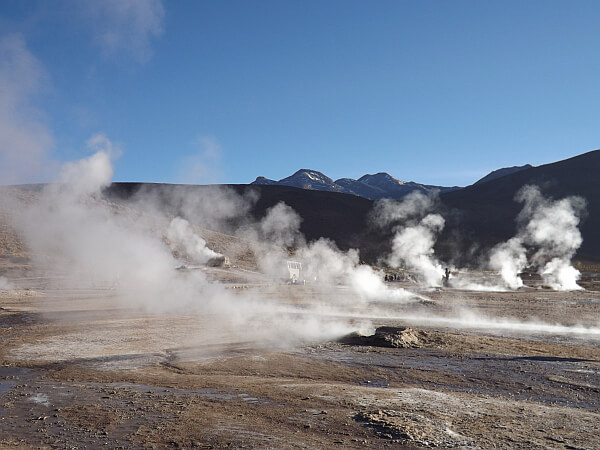 Caused by high levels of volcanic activity, the Tatio Geysers are the highest geysers in the world at more than 14,000 ft. At this geothermic field, water and steam spews from more than 70 spots, and there are 60 pools of boiling water with soft edges, formed by mineral salts. The geysers are most active early in the morning and later in the evening; expect a pre-dawn arrival to the area with your hotel or Ivero Travels. Following breakfast in the field, it's possible to bathe in nearby thermal baths, before heading back to town. En route, a stop is made in the small Typical Altiplanic Town called Machuca. 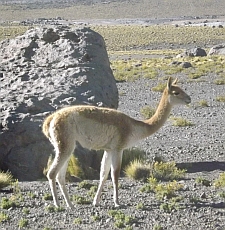 If you're lucky, you might spot some wildlife on the way, including a variety of birds and the vicuñas that run wild in the region.
Go: Cascada Travel

Also, explora tacks on a stay at their Atacama lodge at the beginning or end of a Travesia tour to or from Argentina or southern Bolivia and the Salar de Uyuni—the world's largest salt flat.

Story and photos by Charyn Pfeuffer and editor Timothy Scott