Dotted across a hillside among a scattering of native woodland, Awasi Patagonia is made up of twelve private lodges alongside a larger communal lodge with dining room, bar, and sitting room. All have large windows looking out over Lake Sarmiento and the iconic granite peaks of the Paine Massif.

The work of Chilean architect, Felipe Assadi, the lenga–wood lodges span 860 square feet and have private living rooms with wood burning stoves, bathtubs inside, and hot tubs outside. Inside, they are cozy with large armchairs waiting to be sunk into, thick rugs on the wooden floors and woolen throws. 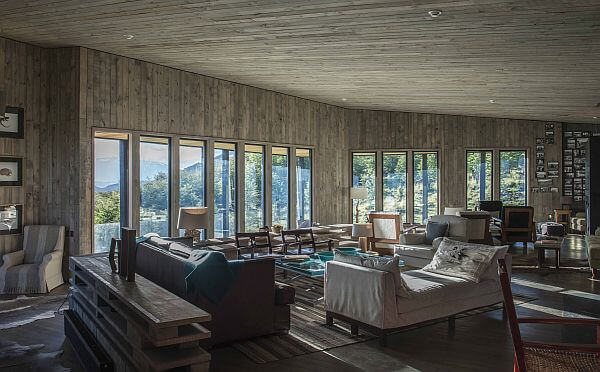 The inspiration for these upright wooden constructions came from outposts, small shelters traditionally used by gauchos as they crossed the pampas tending to their livestock. The idea is that within time they will weather, further blending into the woodland. With a half–hour drive to Torres del Paine National Park, Awasi also makes the most of the estancia in which it sits — you can bike, hike and ride from the hotel. In fact, Estancia El Gringo is just a few minutes away and from there you can ride out with gauchos. Exploring these wild pampas on horseback seems the natural way to travel. 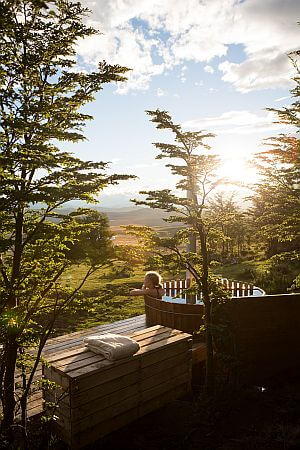 In fact, the location of Awasi Patagonia came about as a result of riding. The spot was chosen after the owners saw a sketch by 19th century British explorer, Florence Dixie, who traveled Patagonia on horseback, keeping a travelogue and making sketches of her favorite views. As a guest at Awasi, the same view Florence sketched can be enjoyed from your private hot tub in front of your lodge, curling up beside your wood burning stove or sipping Calafate Sours at sunset (the calafate berry grows in Patagonia and makes a very tasty Pisco Sour — it looks like pink champagne but has somewhat more of a kick).

Of course, most excursions don't just admire the "torres" from afar. Very popular is the full–day hike to the base of the towers where your hard work is rewarded with an Awasi picnic lunch by the blue lagoon. There are also several shorter hikes, such as to the waterfall, Salto Grande, and one for the bucket list is visiting Glacier Grey. The distances in this part of the world are nothing short of shattering. The sheer scale of the Patagonian pampas is what makes it so impressive but gear yourself up for a 5–hour transfer from Punta Arenas Airport to Torres del Paine.

As a result, most days start with breakfast in the hotel (the kitchen does a mean omelette, plus there's a good spread of fruit, cereal and juices), then it's a picnic lunch mid–excursion and back to base in the evening for dinner and drinks. Dinner is casual–smart with a large fire casting heat across the diners and enthusiastic staff bringing further warmth to the affair. The staff as a whole — from the guides to the barmen and drivers mdash;are all filled with the excitement of working in a new hotel. It's contagious, refreshing, and makes you feel very welcome. Fingers crossed it will stand the test of time. 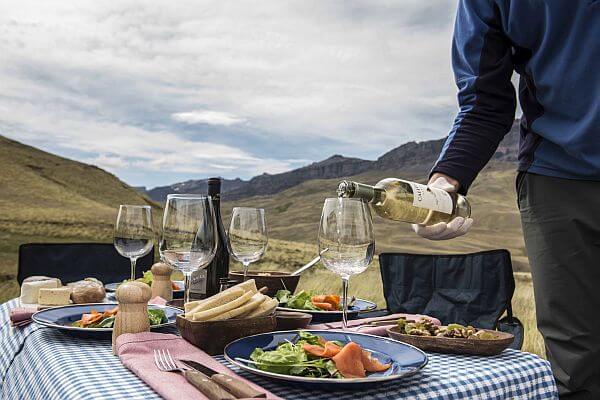 As for food, the menu changes each evening with two options typed on a scroll of paper tied up with string. Starters range from grilled octopus (incredibly tender) with mashed potato to beef carpaccio, onion soup, and salmon tartar with quinoa and apple. Meanwhile, main courses include steak with mushroom risotto, salmon with lemon pur&ecutee and guanaco fillet. You will see many guanacos during your stay; these llama–like camelids live a free existence and travel in herds around the pampas. As well as guanacos, wildlife sightings include Darwin's Rheas, foxes, condors armadillos, skunks and, if you're lucky, pumas.

Being in Chile, meals (including picnics) are served with some delicious local wine and beer. For wine, labels include Errazuriz, Oveja Negra and Caliterra, whilst for beer it's all about Austral which is brewed in nearby (relatively, that is!) Punta Arenas. 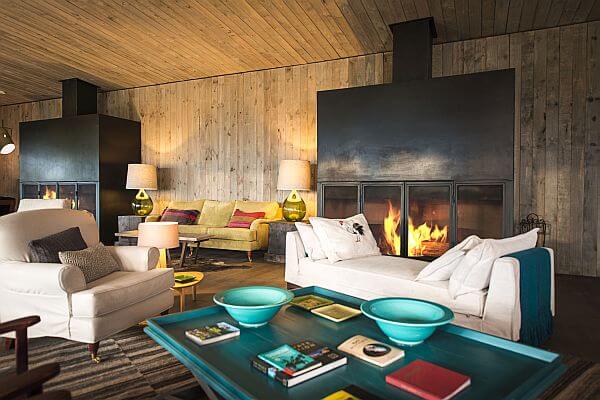 With a growing selection of high–end hotels in and around Torres del Paine — from Explora to Tierra Patagonia and The Singular (browse our reviews here) — the thing that sets Awasi apart is the fact that each guest lodge has its own guide and 4WD. Unlike other hotels where you choose from a list of daily excursions at set times, at Awasi it's up to you what you do and when. For upscale adventure travelers who are used to controlling their own schedule, Awasi makes each of them feel like it's all a custom vacation.

Review and photos by Gabriel O'Rorke