Rambling along a hillside in the center of Patagonia's 598,000–acre Torres del Paine National Park—a UNESCO Biosphere Reserve and considered one of the most beautiful places in the world—Hotel Salto Chico as it was previously known is a strategic and comfortable site from which to explore the area on a Patagonia tour.

The park's microclimate, regulated principally by its proximity to the sea and its low altitude (150 feet above sea level), allows for pleasant temperatures during the day and very low precipitation year round. However, it is also the land of "four seasons in one day" as rain may be followed by a sudden snow squall, then glacial winds that can gust to 70 miles per hour, sweeping away the clouds to reveal brilliant sunny skies. The climate becomes a part of the sensual experience. 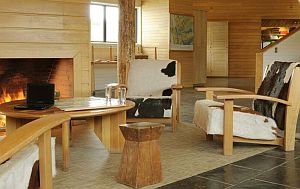 Allow time to get from one part of the hotel to another, not because of distance but because one is constantly captivated by the killer views. Every window looks out on three striking peaks known as Los Cuernos (The Horns), on Lago Pehoé or on Salto Chico (Little Falls), each ever–changing with sun and shadow.

Peepholes are incorporated into bathroom walls so guests won't miss anything while brushing their teeth or soaking in the Jacuzzi after a hard hike. Created by award-winning Chilean architect German del Oro, this hotel shares elements with his later Hotel Remota—its ground–hugging profile, interior ramps, curved stairways and use of pale local lenga and coigue woods, as well as separation of the pool area from the hotel.

In contrast to Remota, the atmosphere at Explora Patagonia is light and airy, cheerful and welcoming. The dining room overlooks the falls, its tables topped with blue and white checkered cloths. Colorful aqua and yellow floral cushions on white wicker furniture invite us to stay a week just to contemplate the stunning nature surrounding us.

Soft jazz plays in the bar and a baby grand piano hints at musical interludes, while strategically–located fireplaces beckon in the common areas. Although the hallways are hardwood, as are bathrooms and room entries, there's a cozy carpet underfoot in the bedroom itself. Comfy armchairs promise hours of simply enjoying the changing scene filling the window. Outside boardwalks wander intriguingly between rocky headlands. Viewpoints are everywhere. The Casa de Banõs del Ona complex sits beside the lake. It's reached by a rather lengthy walk down outdoor steps in the brisk winds—making the heated indoor pool and open–air Jacuzzis even more enticing. 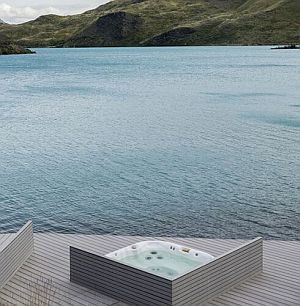 Depending on age, interests and fitness levels, guests can choose daily explorations on foot, on horseback, by van or boat, accompanied by well–trained bilingual (English and Spanish) guides. Each day, at least five different explorations are offered from 25 alternatives, all fully equipped and selected according to the weather.

While we don't tackle any major hikes—unlike many a Boomer—we do spot condors, cuddly–looking guanacos and a few ostrich–like ñandú along with Chilean flamingo. A departing British guest writes, "I have traveled the world extensively and have been overwhelmed by the kindness, happiness and efficiency of the staff here. In all areas there is a strong sense of the 'explora way,' from reception through catering, housekeeping, drivers and obviously the guides…it's a real joy and as it is so good, I'm going to come back again soon. PLEASE DON'T GET TOO BIG!!!"

Note: Explora Patagonia is 248 miles from Punta Arenas, a five–hour trip by hotel van. Punta Arenas is four hours by air from Santiago.

For more information see: Patagonia by Horseback: A Chile Riding Exploration With Explora