By Lorie and Paul Bennett

"Because we have unusually favorable seas, the captain has decided to follow the southern route around Cape Horn instead of returning directly to Beagle Channel," announces the Mare Australis first mate. Passengers grab cameras and flock to the top deck, not wanting to miss this unexpected experience.

We're flying into Ushuaia for our final adventure in a six–week tour of Chile and Argentina. As we descend from the clouds between 5,000–foot glacial peaks, we wonder where our pilot can possibly find a flat place to land. Not to worry, the airport sits on a headland in the Beagle Channel so we're soon down safely and looking up in awe at the mountains we just flew through. The most striking is craggy Mt. Olivia accompanied by her Cinco Hermanos (Five Brothers), seen from most city vantage points.

Ushuaia's only five–star resort, Las Hayas, commands stunning views of Beagle Channel from its perch nearly two miles out of town. It's where Nelson Mandala spent his honeymoon. We settle into the Albatros Hotel, more conveniently located near the waterfront, for two days of exploration prior to boarding the Mare Australis for a cruise around Cape Horn. Ushuaia's World's End status is played to the hilt by the marketing people but we decide to go along. After a short cab ride, we board El Tren del Fin del Mundo (the End of the World Train) for a leisurely three–hour trip to Tierra del Fuego National Park. 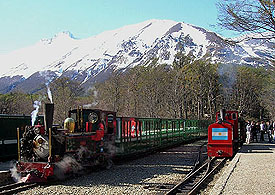 Nudged periodically by a diesel, our little engine that can––Camila––puffs and whistles her way along the narrow–gauge track, following the route used between 1909 and 1952 to transport criminals and political prisoners from jail into the forests to cut cordwood. Hundreds of stumps are silent testament to their work. In 1994, the train was revived as a popular tourist attraction and, to dress for the occasion, you can purchase or rent a yellow and blue striped convict suit.

In Patagonia between July and November, crab (centolla) is literally king. Au naturel, in soups or baked with a wide variety of tasty sauces, it dominates menu choices. We tackle generous portions of freshly shelled leg meat accompanied by lots of lemon halves, crusty bread and a bottle of Argentina's fine wine. Ah, gastronomic bliss!

Cruceros Australis operates two pocket cruisers––the Mare Australis, built in 2002 and the Via Australis, built in 2005. They ply the waters of Tierra del Fuego between Ushuaia and Punta Arenas from September through May. Passengers can choose cruises of four or seven days, traveling in either direction or both. On sailing day, we check our baggage in at the downtown office and hand over our passports. Immigration formalities will be completed late at night after we cross the Beagle Channel, leaving Argentine waters for those of Chile. Luggage and passports catch up with us onboard. The Mare Australis carries 129 passengers in spacious comfort, the Via Australis 136. 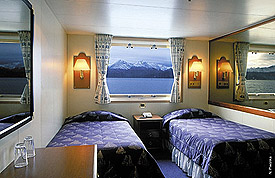 Boarding about 6 p.m., we find the roomy cabins on four decks are pretty much identical. Twin beds can be joined to make a double, there's ample storage, a digital safe, bathroom with telephone shower and a fine view through a rectangular window. Hallways are wide, public spaces are comfortably furnished, there's a small library of topical books and coffee, tea and cookies are available most of the day. The open bar is frequented mostly at the cocktail hour. Soon it's time for our introduction to the skipper and crew, a welcoming pisco sour and a tango demonstration by a couple from Usuhaia, Carlos and Georgina. We're a mixed bag of travelers: Several Australians, two German tour groups, some French and a scattering of Americans, Spanish, Brazilians and Italians. A newsletter in English outlining the ship's activities is placed in our room. Talks and presentations are given separately–– English in the forward Yamana Lounge and Spanish in the aft Sky Lounge. An Italian couple speaks neither language and one group requests German. Tour guide Ana does her best with three languages but, on one occasion, gets so confused giving announcements about boarding the Zodiacs, she forgets to do the English and a number of us wander around bemused. 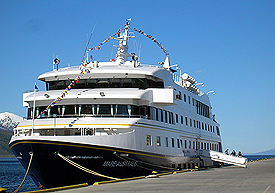 Expedition leader Francisco Cardenas, a Punta Arenas native, is enthusiastic about Patagonia. We'll be sailing around the Darwin Icefield, one of the world's largest, with more than 200 glaciers flowing towards the sea in all directions. We'll get off on Cape Horn, visit several glaciers, tour an archeological site and hang out with some Magellanic penguins before we disembark at Punta Arenas. We enjoy the evening meal, wine and lively chatter in whatever language. In the middle of the night, we're gently wakened by a change in the ship's motion. Slowly rocked by large swells from the open South Atlantic, we're soon lulled back to sleep.

We're up early and dressed warmly for the first excursion of the trip, a Zodiac landing at Cape Horn. We're blessed with steady weather and a few sunny breaks. Four boats carry up to 14 passengers each on their gunwales, making two trips to get everyone ashore. Life jackets are a must and a check–in and check–out system using room–number tags ensures no one is left behind on land. Wet–suited crew help us alight on the rocky shore, ensuring we're dry for our adventure. A network of boardwalks across the island protects the fragile environment— a thin layer of moss and scrub on glaciated rock. A few songbirds show themselves and we wonder how they got way down here. We trudge up 130 steep wooden steps to the cliff top, probably looking like a hundred orange penguins.

Cape Horn! We're here and living the dream in relative comfort. But there are an incredible number of stories of adventure and tragedy. Since it was first discovered by Dutch seamen in 1616, more than 800 vessels have perished in these notorious waters, most of them in the days of sail. As a stiff wind snaps the giant Chilean flag near the lighthouse and makes the anemometer propeller whine, we take the obligatory photos. There's time to visit the 35–foot–high steel memorial to dead mariners, peek into the tiny wooden chapel, buy a small souvenir or send a postcard from the lighthouse and enjoy wild vistas of rocky islets. 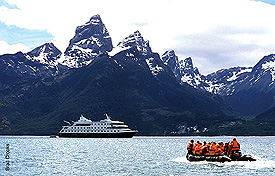 Safely back on board, the mate announces the weather is holding so we have the rare opportunity of rounding Cape Horn rather than retracing our route up the Murray Channel. As we sail quietly through small waves, images of the legendary wild and crashing seas come to mind. We're glad to be in the right place at the right time! The second Zodiac outing is to Wulaia Bay, where in the 1830s British explorer Capt. Robert Fitz Roy had several encounters with the now–extinct Yamana aborigines. The Yamani survived naked in this harsh environment by coating their bodies with a thick layer of seal fat.Guide Francisco tells the story of the locals forcibly stripping a missionary of his clothing. The poor man feared he was about to be killed and eaten, but they just wanted to coat him with grease to keep him warm. Today the Yamani's 8–10,000 years of middens are being ripped apart by wild pigs before archeologists can study them. Also under attack are native upland geese, tasty prey for raptors or foxes.

Francisco talks with knowledge and passion about the history of the area. We go through a substantial building that, until 1979, was a Chilean Navy outpost. The Cruceros Australis company plans to restore it as a museum. After the missionaries "tamed" the Yamani, sheep farmers settled but found the going too hard. Perennial celery and rhubarb still thrive and daffodils nod their heads here and there. Back at the stony cove, we sip hot coffee or chocolate, or Johnny Walker "on the rocks." 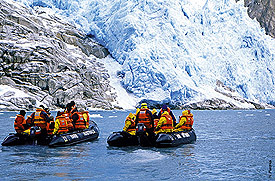 Next morning, we're told about the history of the Strait of Magellan and the unsuccessful attempts to settle it. But we're soon distracted by a panoramic view of GÃƒï¿½Ã‚Â¼nther Pluschow Glacier, named after a pioneering German pilot who flew the area in 1928–29. The captain maneuvers our ship carefully to effect a safe anchoring in a narrow channel and we hit the Zodiacs again for an excursion up Chico Inlet to view Piloto and Nena glaciers. On both sides of the fjord, rivulets splash from the plateau above while a large waterfall challenges the calving glacier for noise. At the end of the fjord are two colonies of nesting white–breasted cormorants.

The glaciers are breathtaking. One is actively advancing, calving every 10 minutes. House–sized blocks of palest blue ice break off with an explosive rupture, splash and mini–tsunami. The other is dirty, striated with gravel and receding up its U–shaped valley. "Global warming," comments Francisco, glumly. The evening's farewell cocktail party features a raffle for the "jack" pennant that has been flying from the bow on our voyage and an auction of the navigation chart used for rounding Cape Horn. The chart goes to a honeymooning Spanish couple—the groom paying $300 US to the obvious delight of his bride. Money raised is "split among all the crew family that suffer any expensive and dangerous disease." The final dinner is a treat—centolla salad followed by tenderloin of beef and a spectacular dessert. But one more adventure waits. 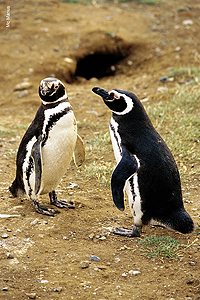 Early next morning, we eagerly board the Zodiacs to visit Magdalena Island's Magellanic penguin colony. About 5,000 pairs nest here and they are not the least bit shy, waddling past us to perform their morning ablutions and gather breakfast from the sea. About 30 inches tall, the birds use their beaks to gather oil from a gland near their tails and spread it on their feathers to keep them waterproof and warm. We're back on board for breakfast and, by noon, a pilot boat has nudged our vessel into the Punta Arenas wharf. We bid farewell to our crew and traveling companions, then board a shuttle along the busy dock to retrieve our luggage. We have two days of exploring here before returning to Santiago for our flight home.

We envy the passengers who are being whisked off to Puerto Natales and Torres del Paine National Park for their next adventure. We were there before we flew to Ushuaia and highly recommend the scenery, the adventures and two very special hotels––Remota and explora's Hotel Salto Chico (see reviews on this website.) While wandering windy Punta Arenas, we discover the French nouveau home of Doña Sara Braun, now a national monument. The luxurious Hotel José Nogueira and its solarium dining room occupy part of the building and it's where we'll stay next time. If Spain's King Juan Carlos was happy here in 2004, it should be fine!

At the Naval Museum, we watch an amazing video. In 1929, Maine–born adventurer Irving Johnson took a small movie camera aboard the German four–masted bark Peking, climbing the rigging to film spectacular scenes during wild storms as the ship rounded Cape Horn. Johnson and the Peking crew were lucky to survive and we realize how fortunate we've been to have "paid our dues" on calm water in a cozy and elegant purpose–built cruise ship with a crew of friendly professionals.

Story by Lorie and Paul Bennett

Traveling in Chile in Style
Luxury Tours in South America