There are few eco–tour destinations in the world that compare with the natural beauty found in Chilean Patagonia. Pumalin Park, a vast private park in Chile's northern Chaiten region created by American conservationist Douglas Tompkins, is an unrivaled way to experience the best this natural wonderland has to offer, balancing off–the–beaten path adventure with upscale comfort. 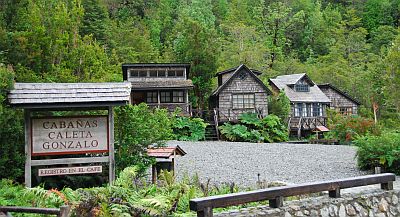 In the intervening decade and a half, Tompkins has spent more than $25 million to buy up his slice of paradise, draft plans, hire park rangers, build trails and otherwise organize what is today known as "Pumalin Park." Says Tompkins: "The gratifying rewards for our work are in the compliments we receive by the thousands who appreciate our love and care of Chile as they see our efforts translated onto the landscapes. Our guest book in Caleta Gonzalo (Pumalin headquarters) says it all."

Spread over 740,000 acres, Pumalin is considered to be the largest privately owned nature preserve in the world. If you're the type that gets inspired and thrilled by nature at is most pure, most awesome rawness, this is one of those special places in the world that is worth a pilgrimage. 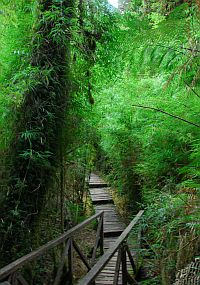 This is a southern hemisphere version of Yosemite National Park South, but without the crowds. On a visit in late March, it was just me and a group of 12 from the United States who were there on a guided tour. It was easy to find my own plot of paradise. For me, that's the way to see nature, I'd rather listen to the sing song of birds and the bristling leaves trembling in the wind than ease drop conversations when on the trail.

And speaking of trails, among Pumalin's "senderos" is a short hike into a globally rare find––a luxurious forest of alerce trees. The alerce has been dubbed the "redwood of the Andes" due to a similar appearance to the giant California redwood tree. It can grow up to 150 feet high and 15 feet in diameter. This special tree can also live more than 4,000 years, making it the planet's second–longest lived tree species. But the tree's durable wood is a target for loggers, and it's endangered. Pumalin is one of the only places you will see such a significant stand of alerces intact.

Along the single road leading into the park from its southern entrance in Chaiten, the name of the northernmost region of Chilean Patagonia, are campsites adjacent to brilliant turquoise–blue lakes, each framed by their very own magnificent Andean massifs covered with a thick, green carpet of trees and vegetation. I marveled at the many birds––such as the Andean condor, an impressive, black–white bird with long, airplane–like wings––which soar over the Patagonian vistas here, breaking up the quiet stillness one grows to cherish in such a remote part of the world. 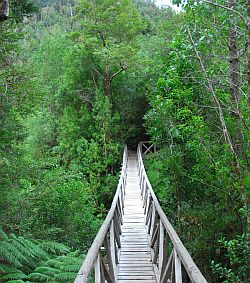 The more adventurous and physically fit could prod deeper into this huge natural wonderland on some trails fit for extended trips, hiking and camping in true wilderness seen by preciously few people.

Pumalin Park has been given exclusive concession rights for selling stays at its cabins to the Puerto Varas–based outdoors agency Alsur Expeditions. The company also provides guided tours of the park's offerings, whether on foot through the forests or by kayak through the fjords. They can plan a diverse array of activities. "We are flexible and able to tailor costs and trips to the needs of each guest," says the friendly Claudia Koch, operations manager for Alsur.

A typical tour of Pumalin goes four or five days, and many begin it by getting there on a boat ride that starts out from the southern city of Puerto Montt. This recommended boat trip navigates through the park's often windy but stunning fjords, with stops at a natural hot springs and an organic farm once inside the park boundaries. The boat trip eventually arrives at the park lodge in Caleta Gonzalo, which boasts seven tasteful, rustic–looking cabins capable of holding as many as 5 people. 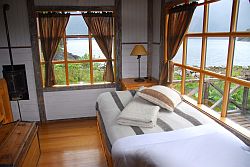 These modern cabins were meticulously designed by Tompkins himself, and many have wonderful views of the water and mountains. The restaurant at Caleta Gonzalo is first–rate, too, with salads prepared mostly from organic ingredients grown inside the park. I especially enjoyed the four–course meals at night, eating finely prepared beef or chicken and drinking some of Chile's best red wine.

While at Caleta Gonzalo, your Pumalin Patagonia adventure experience with Alsur might also include a hike to a secluded waterfall on a huge rock face called "Cascada Escondida;" a horseback ride to a glacier on Michimauda Volcano; and a trek through lush temperate rainforests. Along with the natural beauty, if you're fortunate you may see a colony of sea lions. With an extended stay you could include several days of sea kayaking or fly fishing at nearby lakes, rivers and streams.

Another agency, the Chiloe–based Austral Adventures, run by American Britt Lewis, sells four–day boat trips through the park with guests sleeping on board a 50–foot boat housing four cabins.

The best times to visit are Chile's warmest months, November through late March. The water passages are clearest in January and February.

However you decide to set up your custom tour to explore Pumalin, it's an adventure you're sure to appreciate and remember.