The area's first 5-star lodge, Tierra Chiloé is located on Chile's second biggest island, Chiloé, and brings a touch of luxury to the traditional, rustic archipelago. 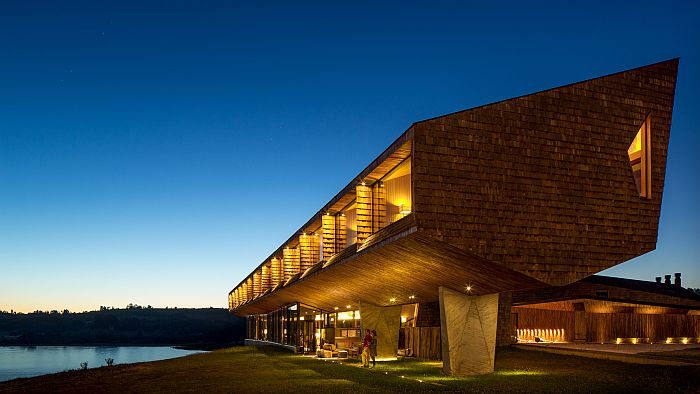 Until September 2012 the Chiloé Archipelago did not have any luxury hotels; and until November 2012 there was no airport. Now, a 15-minute flight connects Chile's second biggest island to Puerto Montt in the mainland, and a 5-star lodge, Tierra Chiloé (formerly El Refugia), has opened its doors.

Tierra Chiloé is an all-inclusive (food, alcohol, transfers and activities) luxury lodge so a visit begins with an airport pick-up. Island life is rural and rustic, and colorful shingle houses are dotted over the rolling countryside, most complete with a few sheep and chickens in the garden. The half-an-hour drive to the hotel finishes with a stretch on a dirt road and finally a Eucalyptus-lined avenue to the lodge.

On arrival, you are greeted with Tierra Chiloé's Pisco Sours extraordinaire — some of the frothiest, strongest and tastiest in Chile. On the ground floor, the long open–plan building has a raised restaurant, separated from the seating area by a waist–high partition. Below, an expansive seating area leads from a bar at one end, past an open fire to a corner sofa at the other end. Full–length windows line the walls, urging the eye outwards and over the beautiful scenery.

Large windows frame a view of wild flowers covering a hillside that leads down to the blue waters of Reloncaví Sound. Tierra Chiloé's boat bobs alongside a jetty, and on clear days a jagged column of Andes mountains and volcanoes line the horizon.

Designed by Chilean architect Patricio Browne, the hotel is very much in tune with traditional Chilote style. Larch wood shingles create a picturesque (and practical as they are very durable) exterior and inside the walls and ceilings are lined with local Cypress wood planks.

Downstairs there's a small wine–tasting room, and outside soft seats surround an open fire underneath the boat-like belly of the hotel. The structure is elevated on concrete stilts, a reference to the local stilted fishermen's houses, known as "palafitos." Another local touch is the scattered sea shells that serve as gravel around the hotel. 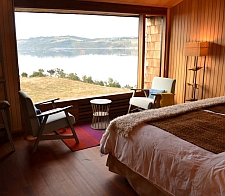 All 12 bedrooms are very similar, with the exception of a couple of slightly larger rooms which have space for an additional bed for guests with children.

Local Chilote handcrafts — wicker baskets, wooden carvings and hand-woven rugs — decorate Tierra Chiloé. Upstairs, there's a studio with books and magazines, a perfect spot for afternoon tea. And there's a small spa with a sauna, steam room, massage room, and a plunge pool with jets. A soak in the spa is perfect ending to a day in the elements. And there's plenty to see so best make the most of the excursions. 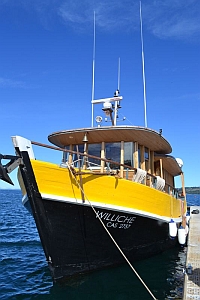 Ranging from biking, kayaking, boating, horse riding, and hiking, Tierra Chiloé has ten excursions on the menu. The head guide will talk you through the options using the large map in the entranceway to point out what's what and where. Highlights include taking the boat across to the fishing village of Dalcahue where you can see one of the island's 150 wooden churches (14 of which are UNESCO protected), visit the artisan market, and eat fresh clams. The full–day trip to the sunken forest at Chepu, and horse riding along the beach (Tierra Chiloé has its own horses) are also not to be missed. Chilote culture and folklore are fascinating so make sure you ask your guide to recount some of the myths and legends.

As for food, most of the produce is locally sourced, and each meal has a set menu. Tierra Chiloé is a small hotel, after all, and the menu is based around what food the chef finds each day. Starters include corn soup with congrio, fresh mussels, or merluza ceviche. Mains range from potato cannelloni filled with carrot and chorizo to chicken with pea purée and peppers or steak fillet with hummus. For dessert you can choose between fruit, sorbet and a desert of the day like chocolate mousse or cheesecake. As for service, the waitresses are conscientious, if a little nervous — go easy on them and take the time to explain exactly what you want. Not everyone speaks English so this is a good chance to practice your Spanish. The hotel manager is always at hand to translate and help out (and offer another Pisco Sour!).

Tierra Chiloé is in a league of its own as the only luxury hotel on the island. The majority of island accommodation takes the form of cabins as this is a popular backpacking destination for Chileans. The main towns have simple hotels, and there's a charming new hotel in a converted house on stilts in the capital Castro (called Palafito 1326) but nowhere apart from Tierra Chiloé offers a refuge of all-inclusive, high–end accommodation. Since luxury tourism is relatively new in this area of Chile, it's not surprising that it still has a way to go (one of the waitresses didn't know what an espresso was) but remember that the charm of Chiloé lies in its rustic nature and you will enjoy exploring this enchanting island in style.

Web Address: www.tierrachiloe.com
Total Number of Rooms: 12
Published rates: $530 per person, per night, all–inclusive, the hotel is only open from September to May

Review by Gabriel O'Rorke, photos by O'Rorke except where indicated.