Located in one of Santiago’s most attractive neighborhoods, El Golf, the W Santiago has privileged views of the Andes, its own stock of restaurants and bars, and all the stylish luxuries you have grown to expect from the W Hotels Worldwide chain.

A Buenos Aires friend once told me he thought that the main qualitative difference between his city and Santiago, Chile, was that in Buenos Aires it feels like there is "always a low-level party going on." The new W Santiago, the first of a series of hotels planned for South America by the hotelier Starwood, gives me the same feeling as soon as I walk through the door.

Following the W playbook, in the lobby and elevators there is the constant hip, techno, electric dance beat piping into the air. This is a hotel that oozes with a sexy, festive ambience. The Santiago branch, which opened in August 2009, I am told has already made its way up to the top echelon of nightspots for the city’s elite party set. With its three bars, an excellent Sushi restaurant, and an indoor-outdoor French restaurant, there are a lot of upscale options under one roof. As the local PR director told me: “We don’t want our guests to ever have to leave the building.” 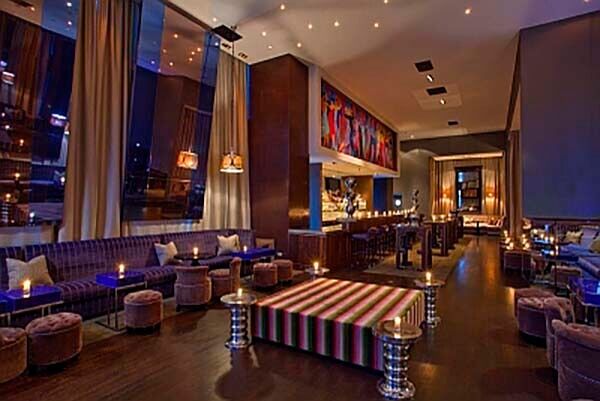 My stay at the W Santiago for two nights was in late December 2009. With the 6-million city suffering at the time under a sweltering heat wave, I moreso did not want to leave the hotel because of its air conditioning, comfortable bed and rooftop pool. It is also situated in a stunning spot, atop a towering building with views of the Andean mountains and hilltop houses and apartments in the El Golf neighborhood. I developed my favorite perch on the 21st floor roof, with its infinity pool, cool mixed drinks, and penthouse bar booming out reggae and rap.

ut the W Santiago's self-contained concept does not stop there. The stylish hotel is actually the lynchpin tenant of a larger, ambitous mixed-use complex, called Isidora 3000, that includes a convention center, offices, luxury apartments, a sprawling gym, and several boutique stores including a local wine store--a store that is installing on the premises the largest wine cellar in Chile. Hotel guests have complimentary access to the gym, which has an ample array of machines. 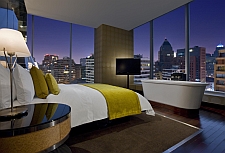 Among the hotel’s 196 rooms are 20 suites, 16 “Cool Corner” rooms featuring especially attractive views of the city, and four of the W’s signature, highest-end WOW suites. Though my own small room was no wowser, it was still cool, with its sexy see-through glass-encased shower next to the bedroom, a flat LCD television on the wall, and a floor-to-ceiling window looking out at a fine view of the neighborhood. The welcome fruit basket was a nice touch. 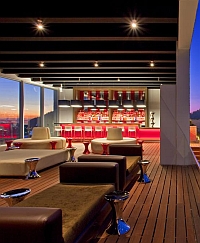 My lunch at the Osaka sushi bar was first rate, with a diverse selection of tasty sushi accompanied by a fine Peruvian beer. The buffet breakfast was also a winner, with every kind of fruit, pastry, bread or other breakfast foods you could reasonably desire. Still, aside from the sushi and power breakfasts, I was disappointed with the rest of my meals at the hotel during my stay. In particular, the wine prices are extraordinarily high by Chilean standards (but perhaps that’s to be expected for a hotel with its own helipad on the roof). And the filet mignon I had for dinner, while not bad, was not what I had expected.

The concept of "high quality" has many definitions, but one part of determining high quality for me is taking note of the details. The details in the Santiago W interior design are often impressive. New York designer Tony Chi did a superb job as he sought to bring out and symbolize the Chilean landscape in the hotel décor using natural elements predominat in Chile such as copper (Chile’s number one export), sheepskin (found on the walls in the W lounge), and a variety of blue, orange and other colors common to Chilean desert, coastal and mountain landscapes.

Altogether, I highly recommend the Santiago W. It's an especially good choice for business travellers with little time to get out and about in the city, or even the Patagonia-bound eco-tourist in Santiago for a day or two between flights.