Lunch with wine at a vineyard, tastings at another winery in the afternoon, and dinner in a big-city restaurant at night: in how many places in the world can you pull this off for several days in a row? In Chile, where the biggest city is circled by wine regions, it’s a snap. 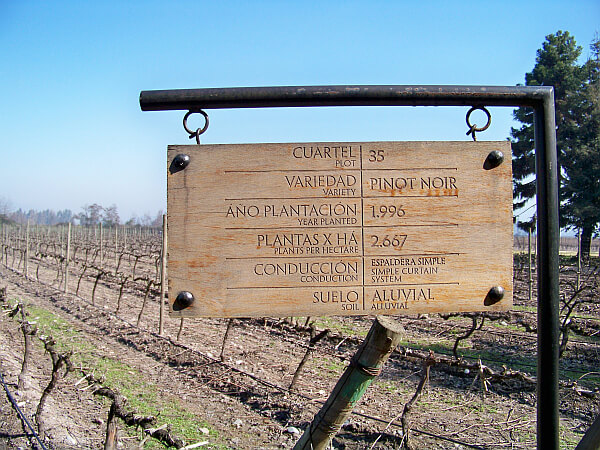 Chile is one long and skinny country—a 2,600-mile strip of land between the mountains and the ocean—but fortunately most of its wine regions are in the central part of the country near the capital. This is one of the few locations in the world where you can sleep in the same major city hotel each night but reach a different wine valley each day by riding an hour or two in a different direction.

There is plenty of variety though, with the different elevations and proximities to mountains or ocean providing a wide array of microclimates for growing grapes. Some locations are better for mineral-rich white wines, others for complex reds with heavy tannins—and often they’re just an hour apart. Many of Chile’s red wine blends achieve their unique tastes by mixing the results of these microclimates together: a lighter blending grape with a heavy Cabernet Sauvignon, for example, or a Merlot from one vineyard with a Pinot Noir from another.

The result is that Chilean wine represents, in many respects, the best value on the planet. While the comparisons to Argentina are unavoidable—only a mountain range separates Maipo from Mendoza—Chile can boast a far greater variety of top-notch, award-winning wines in multiple categories. Here you can hop from winery to winery sampling some of the best Chardonnay you’ve ever tasted, Sauvignon Blanc that is consistently excellent, and Cabernets that win “best of” awards on the international stage. But that’s just the start: different valleys produce excellent Pinot Noir, Merlot, cool late harvest varietals, and even Gewürztraminer.

What Chile doesn’t have is its own equivalent to Malbec—a distinctive signature grape that is identified with that country specifically. The closest thing is Carmenère, a soft and smooth red grape that is used more often in blends than on its own. (It’s sometimes spelled as Carménère , with two accents.) It can be unpredictable, its signature tastes can vary greatly from valley to valley, and it generally doesn’t have the heft and complexity to stand on its own. Some wineries are trying hard to produce high-end varietals that are 100% Carmenère (or close to it), but the results are all over the map.

Some are quite good, as I found out in a heavenly tasting fair where most of the country’s wineries were represented. For me, the ones from Emiliana and Terra Noble were the clear winners—definitely try one of these if you see it on a wine list or in your local shop. But some of the others were so different from each other that they could have been completely unrelated grapes. Few had the complexity found in the wines that use the grape as part of the whole rather than on its own, so the blends are a safer bet.

The Skill of Wine Blending

In fact many of Chile’s most stellar red wines are blends. The terroir is an excellent host for Cabernet Sauvignon and the cool climate Syrahs are something special, but the real award winners are the masterful combinations put out by Chile’s skilled blenders. A few percent of this, a few percent of that, and the sum is greater than the parts.

I got to try my own hand at blending at Undurraga, in the Maipo Valley at Santa Ana de Talagante. This vineyard is unique in several ways, being a prime producer of sparkling wines and parts of it being housed in buildings that date back to the 19th century. (Like many wineries it suffered in the recent earthquake however, with “a river of wine” running out of one building when vats broke apart.)

My group was given the task of blending any combination of four varietals that make up the red Aliwen label wines. After much experimentation, I settled on a blend of 50% Cabernet, 25% Syrah, and 25% Carmenère. I can’t say the result was as wonderful as the high-end Altazor blend I had later with lunch (named after the epic poem from Vicente Huidobro), but it did transport me back to Chile when I opened it up a month later back home.

Organic Wine That Doesn’t Require a Step Down

One interesting advantage to Chile’s geography is that the country is relatively free of the pests and fungi that need to be battled with pesticides in most other wine growing regions. Wine from organically grown grapes translates to some serious sacrifices in quality in many parts of the world—I’ve tasted more than my fair share of organic wine that was almost undrinkable. This country has four natural barriers around the 11 primary wine valleys though: a desert to the north, an ocean to the west, one of the world’s highest mountain ranges to the east, and rugged Patagonia (and Antarctica) to the south. The wines grown on organic or biodynamic vineyard land in Chile are a happy surprise: most can hold their own with those grown using all the tools of science at our disposal.

Emiliana figures in highly in this organic wine category, with its Natura brand being the third-largest organic one in the U.S. I was also fortunate enough to tour the striking winery of Matetic in the San Antonio Valley before riding a bicycle to their La Casona boutique hotel in the countryside, past lots of sheep nibbling on the grass and weeds between the grape vines. The hotel’s Equilibrio restaurant is an excellent spot to try out Matetic’s wine selection, such as their Syrah Corralillo with a leg of lamb from a nearby farm or their Sauvignon Blanc EQ Coastal with fresh fish that has only traveled 45 minutes by road from the coast.