Magical Cartagena and the Rosario Islands in Colombia


Colombia's leading luxury destination of Cartagena is a well–preserved colonial gem by the sea, where centuries–old buildings nestle behind solid stone fortress walls and tropical islands are a short boat ride away. 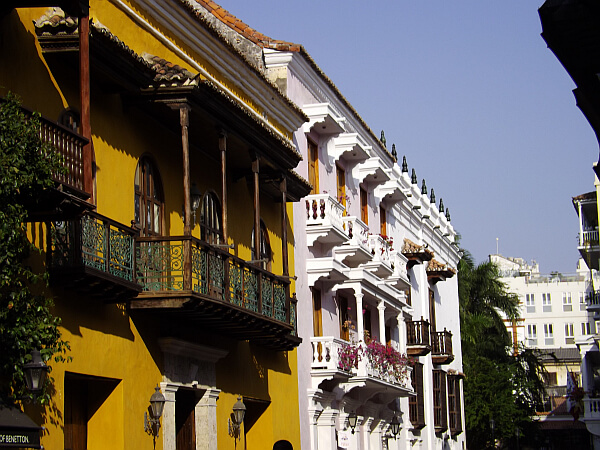 After a drink on the rooftop of Andanda Hotel, I make my way down to the lobby entrance, where a horse and carriage is waiting with a few others in my group. We clip&ndashclop through the historic district, past colonial mansions now converted to restaurants, bars, and shops. After arriving at our destination of Santa Clara Sofitel Legend, we eventually sit down in the 1621 restaurant and have a meal that tops anything I've had thus far in my three trips to Colombia. Good wine and conversation fill the arched space of what was once a convent, a different sort of devotion once bouncing off the walls.

When tourism takes off in a Latin American country, it often doesn't happen in the capital city or near the biggest airport gateway. Instead the main tourism magnet happens organically, in the most attractive location for visitors. Witness Antiqua in Guatemala, Cusco in Peru, and Roatan Island in Honduras. Cartagena de Indias is Colombia's tourism jewel in many respects, but for luxury travelers especially it's far and away the best.

After a sordid history of slave ships, plundered Inca gold, and then drug exports, Cartagena has put on a new suit and this one is more respectable. The city is now a magnet for hip designers and architects, forward–looking investors, and wealthy tourists looking for a new getaway with cachet. Now it feels like a real tourism crossroads, a place where North America and South America meet to eat well and soak up the aesthetics.

The atmosphere in the historic center is dominated by its massive stone walls. Some of them date back to the early days of the Spanish empire, when the city was founded by settlers from Cartagena, Spain in the mid–1500s. The walls and forts got bigger and stronger after Sir Francis Drake sacked Cartagena de Indias in 1586 and sailed away with a ransom equivalent to US$2 million in today?s money. The solid, well–built walls are intact enough to host buildings and cafes on top, or — when I attended a tourism conference the year before — a band on stage and a thousand revelers.

Throughout my stay I have walls or forts in my line of sight, the turbulent history of the city showing up at any potential point of attack. The grandest single fortification is the Castillo de San Felipe, built high and proud in a spot well away from the center, designed to repel any attack coming from land rather than sea. It's an excellent location for seeing the lay of the land and exploring a warren of tunnels underneath. Some were a form of human booby traps: if raiders managed to breach the walls, as soon as they got inside there were men with swords hiding in niches lining the dark hallways. 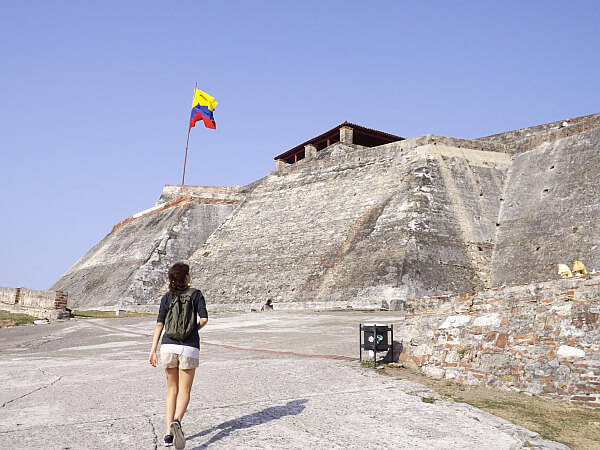 When you start thinking your job is tough, consider the fate of commander Blaz de Lezo, who defended the city in 1741 from an attack by 25,000 English soldiers and 186 ships. His statue is outside the fortress because his 2,500 men managed to fend off the attack and save the city for the Spaniards. He had already lost an arm, a leg and an eye before this battle even started. He lost the other leg in this one and died soon after.

From the top it's clear how large Cartagena de Indias has become. I manage to navigate the whole historic center on foot over the course of a couple days, but most of the million–plus people who call the city home live far beyond the walls. So while there may seem to be as many tourists as locals in the heart of the old city, even on cruise ship days the foreign invaders don't dominate the total. The beach resorts fanning out in both directions from the city walls have as many domestic tourists as foreign ones, with a good portion of those foreigners being from Latin American countries. A sun and fun vacation here has a far different feel than one in Cancun or Ambergris Caye.

The best way to really soak up the atmosphere of historic Cartagena is to wander the streets aimlessly, inevitably stumbling upon hidden squares and elegant churches not important enough to make any top–10 list. You discover interesting shops around every bend, whether high fashion by way of Silvia Tcherassi (who also owns and designed the chic Tcherassi Hotel) to woven straw hats or gleaming pottery in simpler digs. Carry a map along just in case, but it?s hard to get all that lost here: just head toward the old city walls and go up. A stroll along them at sunset or at night — with the stones lit up from underneath — is a special experience. 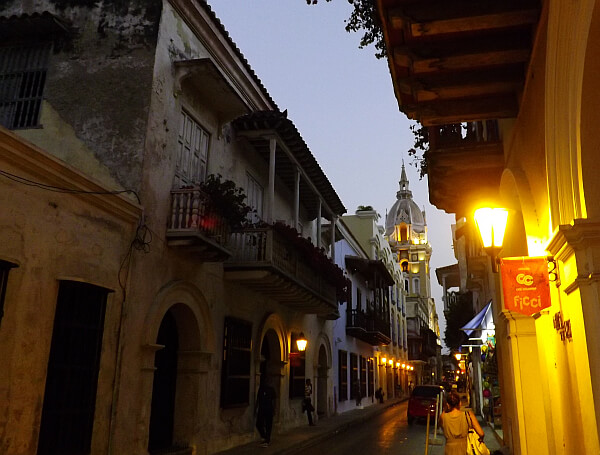 I'll admit to buying an Aguila can of beer from a street vendor and enjoying the freedom of that thoroughly, joining the locals for a sundowner the easy way. But for a more civilized option, café tables are set up from lunchtime until the wee hours in certain plazas. This is when a visit feels like a real vacation: away from traffic, sitting in front of a grand church from the 1500s, eating and drinking something you wouldn't have at home. In Plaza Santo de Domingo I while away half an evening looking at the oldest church in the city and watching the dance of local vendors, workers, and visitors passing by.