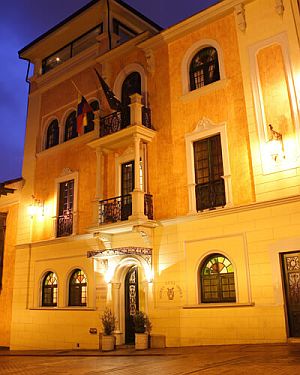 Knock a Republican era building together with a Colonial mansion and you have Hotel de La Opera, a blend that is uniquely Colombian, bold in breaking with tradition of hotels in Bogota. It takes no stretch of the imagination while gazing upon the views from La Opera-the sagging colonial rooftops, the belfries of the capital's Cathedral and the ubiquitous plaques noting historical trivia-to imagine South America's liberator Simon Bolivar frequenting the elegant and stately rooms of this Colombian institution.

Located on the unforgettable and pedestrianized Calle 10, not to be confused with the Ministry of Foreign Affairs opposite, La Opera is found one door down from the Teatro Colon. It is from this baroque-styled theatre and its frequent operatic offerings that the hotel takes its name.

Alighting from your taxi no large or ostentatious ceremony awaits, merely a guard and a small entrance that could easily be overlooked. The marble reception is petite and could be described as cramped but it is what is beyond this neat and trim entrance that heralds a time past and proves the Colombo Italian ownership's dedication to detail. Not an item of gaudy artwork is in sight. Tasteful Italian furnishings compliment the architecture, which is clearly what the owners had in mind: the work of art is the building itself.

La Scala Restaurant-offering Mediterranean fare in the atrium of the ground floor-compliments El Mirador, based on the top floor. The latter boasts unrivalled city views and a menu that leans towards Colombian and international cuisine. The louche and perhaps vaguely decadent El Automatico bar has images of a bygone Bogota. If you tire of these choices, then feel free to wander out into the Candelaria district or the newly hyped Zona C which is positively brimming with award-winning restaurants, as well as the world-renowned Gold Museum and the Museum of Colonial Art. 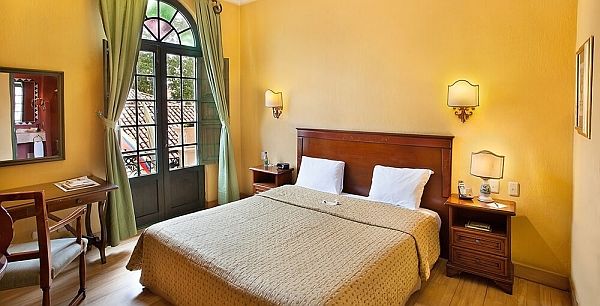 The 28 original rooms fall into three categories: Standard Republican, Standard Colonial and Junior Suite. At inspection the hotel was adding 15 more suites in an extension there is something for every occasion. These two buildings that make up La Opera have served various uses over the years-from convent to hospital to library-so it will come as no surprise that no two rooms are identical in size. For something different try the corner Junior Suite 206; it has original colonial balconies that open from stripped wooden floors, high ceilings, large comfortable beds, and ample space. Room 203 was once the old music room, a fact given away by the blue and yellow kaleidoscope of conservatory glass that adorns the entrance.

Wireless Internet access is available throughout, a business center offers support, and there is a spa and small gym for those looking to detox from the excesses of the effervescent Bogota nightlife. 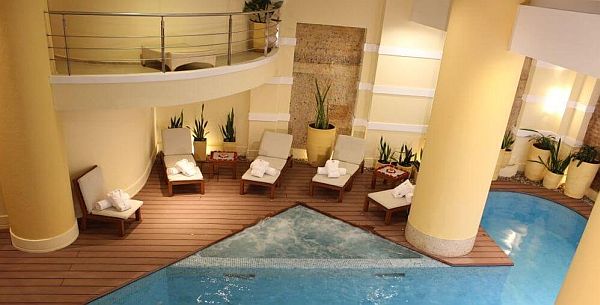 The Hotel de La Opera may be more expensive than neighboring hotels or the mega chains in North Bogota, but this hotel allows you to explore the beginnings of Colombia and its colonial heart: its humble beginnings with walls made from cow dung and bull's blood and a fountain from which Simon Bolivar is supposed to have watered his horses. The Hotel de La Opera oozes history, but it also offers fantastic service and close attention to detail.