Touring the Best of Colombia


Armed with the ideal itinerary and local guides, a traveler sets out to find the familiar and the surprising in the varied landscape of Colombia. 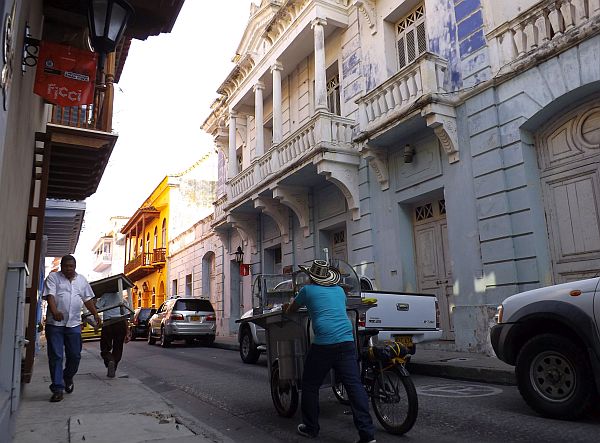 Before you go to Colombia, there’s one word you have to know: arepa. It’s a round, flat bread made from ground corn dough, and it has indigenous roots. It will pop up at most of your meals, and can be served grilled, fried, or baked. Just when you think you’ve tried every variety of arepa, you’re surprised to find a new kind, and it’s laced with cheese, manioc, beans, fish, coconut or barbecued beef.

Colombia is like that. It feels comfortable and familiar after the first day or two, but there are always surprises—people, sites, textures that are wholly unexpected. 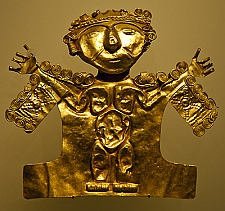 Bogota, in the central part of the country, is nestled in the Andes at about 8,500 feet. One of its top attractions is the Banco de la Republica Gold Museum. The world’s largest collection of pre-Hispanic gold is dazzling and visitors audibly gasp at the necklaces, fertility figures, anthropomorphic containers, earrings, masks, helmets and medallions. Interspersed are masterpieces hewn from clay, stone, shell and textiles. The most famous treasure is a miniature golden raft with intricate figures that depict the inauguration of an ancient indigenous ruler; he is attended by a coterie of shamans and priests. My guide Ernesto explained that the ruler throws priceless golden objects into the lagoon on which he floats, as an offering to the sun god, and his constituents honor him by tossing their own gilded possessions into the water. 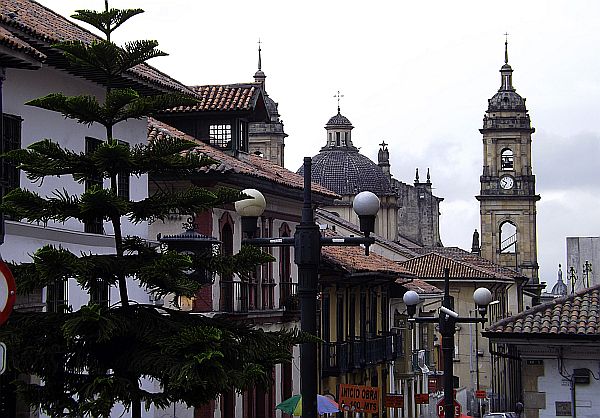 The surprise? Just beyond the raft, and unnoticed by most visitors, is a dark room. Inside, there is an illuminated hole in the floor with hundreds of glittering items. On the walls, in dim light, are countless gold objects. A shaman chants and you realize that you are looking into a lagoon filled with gold pieces, experiencing the ceremonial life of the ancient people and their rulers. 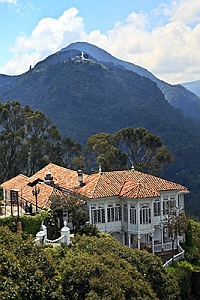 Monserrate, at 10,000 feet, looks down on smoggy, traffic-clogged Bogota. Accessed by funicular or cable car, it is a world apart. The air is clean, the expansive view over Bogota is wonderful, and, when I was there, I paused to acknowledge the pilgrims who walk up the mountain to give thanks, fulfill vows, or simply meditate in the silence of the trees. The chapel houses a famous and very moving 17th century Fallen Christ—he is frail, bloody, physically broken.

The unexpected? Beyond the chapel and the stations of the cross are the decidedly secular local food stands offering everything from chocolate tamales to soups, sausages and coca tea—the latter helping to mitigate the effects of altitude.

Walking through the historic Candelaria area of Bogota is a must, especially the narrow, steep Callejon del Embudo with its restored, colorful colonial houses that are now restaurants and shops. At the end of it is the Plaza Chorro de Quevedo, which is purportedly where the city was founded, but my adorable young guide Ernesto, who has looked into the history, is skeptical. What can be said with certainty is that students mingle there, play music, and, I think, fall in love.

Ernesto asked if I liked theater, and when I nodded vigorously, he took me to Teatro la Candelaria, a legendary theater where Gabriel Garcia Marquez taught, and whose intimate stage was graced by some of Colombia’s best actors. Ernesto introduced me to one of his idols—Santiago Garcia, the founder. Although there was no performance that night, we hung for a while with the actor who was playing Don Quixote in an upcoming production. He wanted to know if I thought Don Quixote was deranged. When I said no, he agreed, and said he thought perhaps Don Quixote suffered from philosophical madness.

The special discovery? In pastry shops, you can order a Chocolate Santafereno: it’s hot chocolate with melted cheese in it. Ernesto showed me how to crumble a pastry into my cup too. Be warned that it’s addictive.

If you like architecture, you’ll adore the historic district, with its churches, its Spanish, Republican and British houses, and government buildings. As you walk, you’ll learn the history of Bogota, which was founded in 1539, and went through paroxysms of colonial repression, independence, and civil war. Leaping into the modern era it got high-end shops, hotels, restaurants, but also traffic, congestion and crime. About the latter, there is impressive security in the historic and tourist areas, and it’s safe to walk during the daylight hours. At night, it’s best take a cab and go to the T-zone, with restaurants and clubs that spring to life on the weekends, or Parque 93, where the park is surrounded by fine restaurants.

After Bogota, I flew to Armenia, which was named after the country, out of sympathy for the l915-1917 massacre. Most visitors come to the area—which is 180 miles west of Bogota—for the coffee plantations, but there are other attractions as well. It was worth our side trip to Salento, which is certainly on the tourist trail but maintains its charm. Local cowboys clomp through the streets on horses; one obliged me by asking his horse to demonstrate some fancy footwork in the middle of the street. In Salento, as elsewhere in Colombia, the people are open, friendly, hospitable and eager to interact with foreigners.