A comfortable, rustic seaside retreat with a strong sense of place, fine–tuned for guests with urban sensibilities. 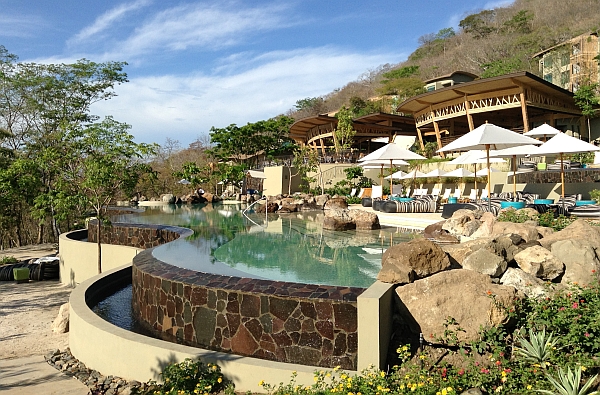 The Andaz Papagayo is quirky — in a good way. Hyatt's boutique brand, developed in major cities, translates surprisingly well to a forested peninsula in Costa Rica. It helps that in the world of Andaz, luxury is not synonymous with formality, which makes this high–end resort feel something more like a hip summer camp. 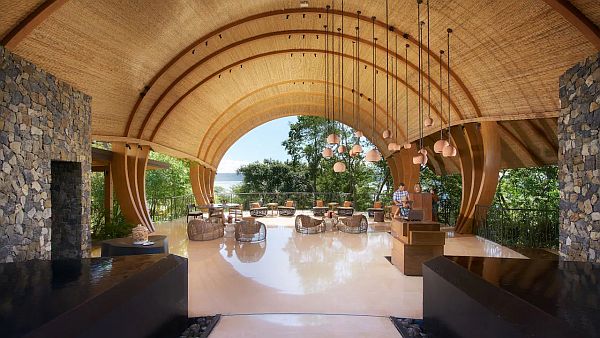 That tone is struck at reception, where a chatty team of guys in skinny blue chinos and jaunty straw fedoras switches up duties — taking luggage, parking your car, checking you in on an iPad. The view from the lofty bamboo reception hall (it's shaped a bit like an armadillo shell) emphasizes that you've arrived somewhere distinct and separate: you can see only trees and the clear water of the Bahia Culebra.

Guest rooms, fortunately, are nothing like summer camp — nor are they too filled with urban boutique gimmicks. The rooms have a minimalist style, but with natural, hand–crafted touches, such as artfully arranged weathered branches and stones above the headboard (made by a local women's artist co–op), that keep the sharp–edge, knob–less furniture from looking too stark. Large Lather brand amenities stock the bathroom, and soft drinks and snacks in the minibar are free. 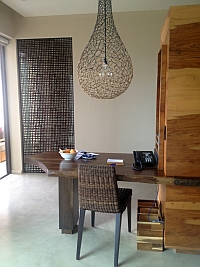 The focus of every room is the balcony, with folding glass doors from both the main room and the large shower (or, in the suites, tubs). The balconies are shaded on all three sides by sunscreens — just be sure to adjust them before you hop in the shower.

Andaz Peninsula Papagayo Resort is built on a steep hillside, well screened by trees, in seven blocks of rooms arranged on two levels. So third–floor rooms in blocks on the upper level have the best views, but Partial View rooms are not bad either, as you can still see the bay, but you're also eye–to–eye with birds in the treetops. 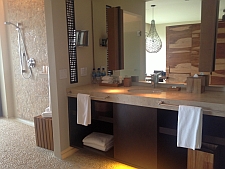 Standard rooms are 560 square feet (52 square meters, including the balcony), while Andaz Suites offer more than double the space. Each of those has an additional sitting area, dining table, wet bar, walk–in closet, and decadent soaking tub. So–called Large Suites expand even further, to 164 square meters, with a broad front deck, a plunge pool, and a very cool round bathtub. All of these, however, are on the first floors of the buildings, and so have limited water views.

Once settled in your room, it's easy to go explore: the property is fairly compact, with shortcut staircases between the levels, so you can walk everywhere — though golf carts are always on call. Most public facilities are on the lower level, farther down the hillside. Only the spa sits higher up, back in the trees.

In fact, the whole resort feels pleasantly secluded, and the buildings have undulating natural forms and nearly blend in with the hillside. Exterior lights are kept to a minimum at night, so as not to disturb wildlife. Families of monkeys still make their homes in the trees around the resort, and early mornings see all kinds of birds, including raucous green parrots. 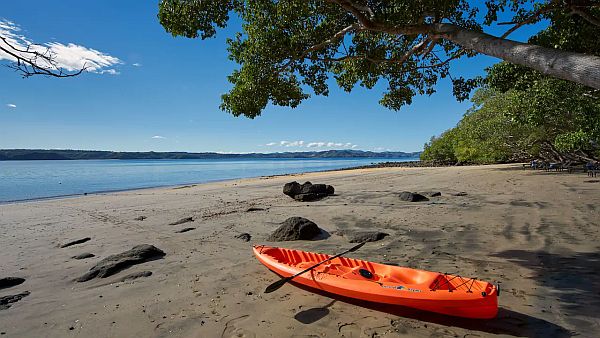 But the Costa Rican feeling is perhaps strongest in the resort's beaches. There are two, one secluded, for adults only, and one a bit bigger and more accessible, with activities such as snorkeling and stand–up paddleboarding. Each is edged with volcanic rocks, leafy trees and glittery gray sand dotted with seashells and hermit crabs. Following the steep, winding paths through the trees to them, you'll have a real sense of discovery when you arrive.

Or you may have a real sense of disappointment — these are not white–sand, palm–tree–edge beaches you see on postcards, and they are both quite small. They are ruggedly beautiful, though, with clear water, and in fact, because they're not typical beaches, they fit right in with the Andaz Papagayo's offbeat style. 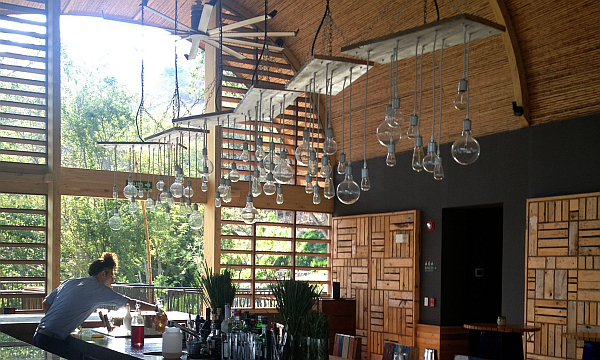 Moreover, the beaches need not be considered a deal–breaker, because if you do want a dose of spacious white sand, you can hop in a hotel SUV (for free, during the day) for a 20–minute ride to the Four Seasons Costa Rica at Peninsula Papagayo, which has two more typical white–sand beaches, or the Playa Prieta beach club. (The nearby Marina Papagayo is another possible destination, with a casual, inexpensive restaurant and bar.)

What the property lacks in standard beachfront it makes up for in food, one of the resort's strongest features. Each of the three dining areas has a distinct vision, yet all are inspired by Latin American ingredients and culinary traditions: Italian–Argentine bar food at Chao Pescao; a touch of Brazil at Rio Bhongo, the biggest restaurant, by the family pool; and inventive Peruvian at intimate Ostra. Local cheeses, seafood, and beer are highlighted on the menu, and everything tastes fresh and cooked to order. Cocktails, packed with herbs and interesting infusions, are exceptionally good. The breakfast buffet at Rio Bhongo is dazzling, but pricey at $40; look for room deals that include breakfast in the rate. 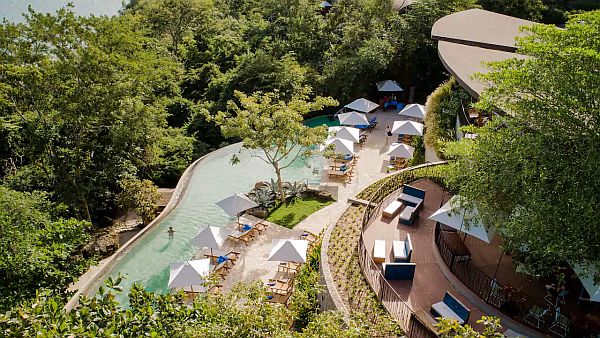 The local–ingredient theme continues in the spa, where moisturizing and restoring treatments are mixed from fresh components such as almond cream, aloe, guava and even ground corn and beans (for exfoliating scrubs). They're developed by Biosfera, a small Costa Rican brand of all–natural beauty products. Book your massage at one of the outdoor treatment rooms, set up high in the trees, in the late afternoon, and you may be able to watch the monkeys clamber through the trees while you shower off.

One final "quirk" (in this case, a genuine drawback) of the resort: some rooms in the upper level blocks overlook noisy ventilation systems on the roofs of the restaurants on the level below. For this reason, it is well worth calling to discuss your room reservation — the east end of block 4 or the west end of block 3, for instance, appear to be quieter. 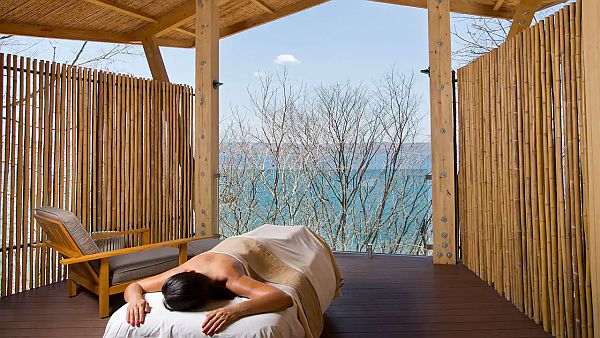 The Four Seasons is the Andaz Papagayo's closest competition, both in terms of physical location and in amenities. It has been open since 2004, and runs like a well–oiled machine. The Andaz staff are enthusiastic, but at the time of this review, a few months after the December 2013 opening, they were still smoothing out a few service glitches (arriving at my door to collect my bags a day early, for instance). But the Four Seasons lacks Andaz's flair — it is overall more conventional in its style, from its architecture to its food.

It's also worth noting that the Papagayo Peninsula, though lovely on its own and convenient to Liberia airport 45 minutes away, is a substantial drive from some of Costa Rica's major natural attractions. Practically speaking, you may prefer to do only a day–trip or two. But even if you don't go out at all, you'll still get a distinct taste of Costa Rica — with style and comfort on top.