Cruising on a 21st Century Clipper Ship to Central America

A cruise line that can boast a repeat–to–first–time passenger ratio of 65% must be doing something right. And indeed, a voyage hugging the Central American coastline while sailing aboard the “tall ship” Star Flyer offers the perfect combination of relaxation and adventure. 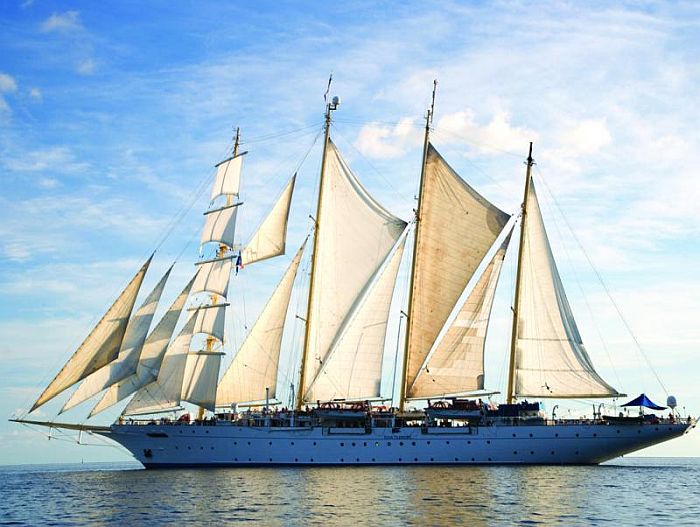 I was all set to snicker: the loudspeaker called all interested passengers on deck to raise the first sail of the voyage. Sounded like a summer camp activity to me, but I played along and took my place in the line of people grabbing hold of the thick rope. When the music started playing, I let out a chuckle at what promised to be a hokey stunt.

Then a funny thing happened: we began pulling the rope, as the stirring notes of the soundtrack of the movie 1492: Conquest of Paradise filled the balmy evening air. It was actually hard work, and watching the sail ascend the mast afforded a feeling of accomplishment. The triumphant music came alive, transporting all of us as the sail began to catch the wind. No sooner had the recorded music faded away than the ship’s captain began playing a majestic tune on the bagpipes. The romance of a moment shared by hundreds of adventurers over the centuries—setting sail on the sevens seas in a classic clipper ship—was captured. It was to set the tone for a week during which the cares of the world were to slip away. 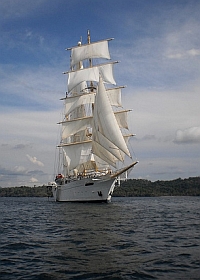 When the ship’s 16 sails are unfurled on all four masts from stem to stern, the 360–foot Star Flyer, decked out in all its glory, takes on a personality of its own, becoming more like a living presence than a mere mode of transport. Perhaps that is the magic that attracts the loyalty of hundreds of returning passengers. At a “repeaters” cocktail party the second night of our Pacific seaboard cruise from Costa Rica to Panama, veterans of up to 10 cruises on one or more of three ships in the Star Clippers fleet renewed acquaintances and forged new friendships.

This kind of camaraderie is a hallmark of a cruise on the ship the size of the Star Flyer: with a maximum capacity of 170 passengers, and a crew-to-passenger ratio of 2:1, there is a superior level of personal service. At the same time, the vessel is large enough to enable variety that would not be possible on even the largest of yachts.

For example, there may be only one dining room, but it is spacious enough to accommodate all passengers in one seating—including a buffet loaded with delicacies imported from Europe, the home of Star Clippers, whose headquarters are in Monaco. The fleet’s menus have been designed in consultation with Chef Jean-Marie Moulien—who has been awarded 3 stars by Guide Michelin—while the wine lists are compiled by Sommelier Brice Falluel (2 Michelin stars). Luncheon buffet themes change from day to day, while dinner is a la carte, offering meat, fowl, fish and vegetarian options every night. (In the rare event that a scheduled entree might not appeal, you can always order steak or pasta.) 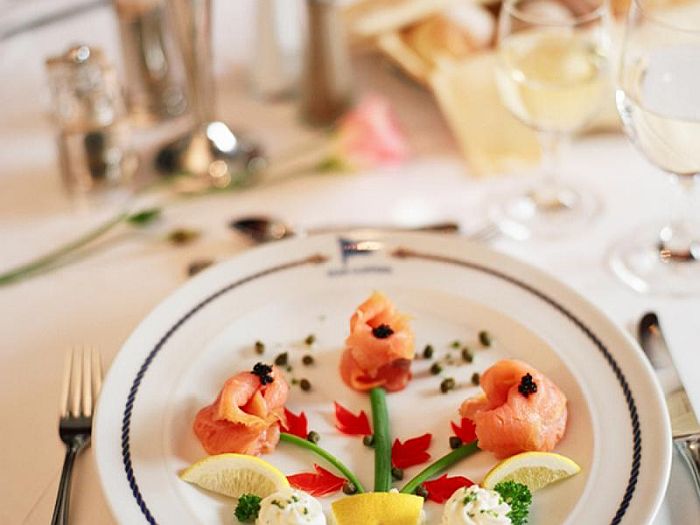 Cocktails and a fine selection of international beers are served up in two bars: the casual Tropical Bar outdoors, and the elegant indoor Piano Lounge. Hors-d’oeuvres accompany cocktail hour every evening before dinner; and in true cruise-ship tradition, a midnight snack is offered up nightly.

Fortunately, there are enough activities to burn all those calories. The ship carries a complement of tenders and zodiacs. The former ferry passengers to reefs and shore excursions, while the latter zip water skiers around the placid ocean. Additional water sports include snorkeling, scuba diving and kayaking.

During the Star Flyer’s 6–day cruise I was on, no fewer than 11 shore excursions were offered, highlighting what eco–tourism superstar Costa Rica has to offer: encounters with nature. Costa Rica boasts some 9,000 plant species, 850 bird species, and 10 percent of all mammals on earth, plus unusual species of frogs and reptiles.