In a land awakening from its culinary slumber, chasing new Costa Rican flavors from San José to the Pacific Coast and Central Highlands 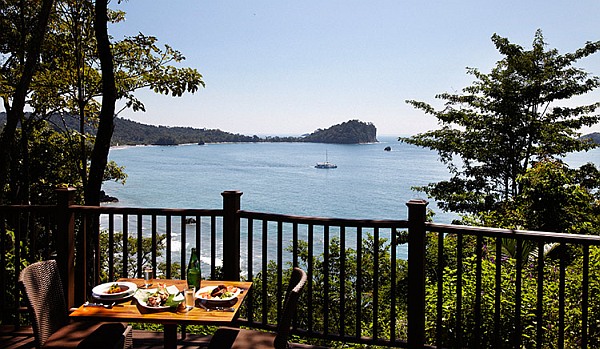 In Costa Rica I met a man who'd been an amuse–bouche for a crocodile—and I wasn't surprised. This scrumptious Central American country is an eat or be eaten world, from the Pacific surfing beaches to the black–sand Caribbean coast and mint–green cloud forests.

"Bats pollinate the agave plant and give us tequila," was how a guide explained the food chain. "Birds eat the insects and their droppings enrich the soil. The wild fig tree is a restaurant for everyone."

Most of us know Costa Rica as a zip–liner's dream, but it's also home to the sloth and the naked–tail armadillo, the shark and boa constrictor—from some of the world's slowest to fastest eaters. In a nation that is often derided for the cuisine put on humans' tables, I'd been invited to join the buffet line, to taste this nation's bold new cuisine.

Slivered between Nicaragua and Panama, Costa Rica has a diverse ecosystem straight out of the Swiss Family Robinson. Lemons, limes, cocoa pods, and coffee berries dangle from overflowing branches. Fat brown cows graze volcanic slopes, producing a special milk. You can feast on shrimp, squid, tiny clams, and lobster. Star fruit papaya passion fruit, and yucca pop up in dishes. Even the pastel houses seem edible. Wrapped in grills, they look like they're about to be spice–rubbed and turned on a spit. 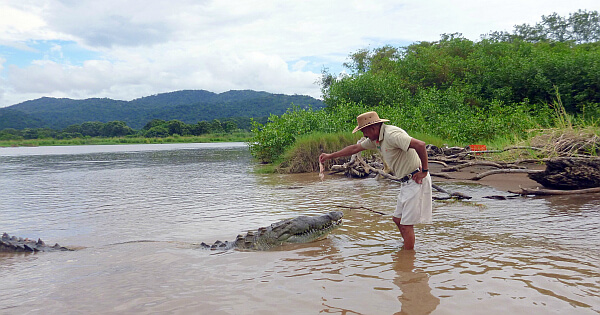 Biting the Knee That Feeds You

Learn from Miguel, my crocodile guide on the lazy Tarcoles River, which feeds into the Pacific. A cheerful man in khaki shirt and shorts, he guided me in a white flatboat. When he spotted lumpy crocodiles lounging on the bank like slothful cows, he jumped ship and waded into the shallows. He swished a raw chicken strip through the murky water.

"You see?" With a rueful grin, Miguel pointed to a gouged knee. That's where a croc aimed for the chicken and bit him instead. But Ticos are philosophers. He makes his living from crocodiles. Naturally, they expect payback now and then.

"Pura vida," he said with a shrug. A phrase that translates as "pure life," but really means "See how things work out in our fortunate country?" As Ticos will tell you, pura vida changed the food.

Awakening Tongues in the Land of Ticos 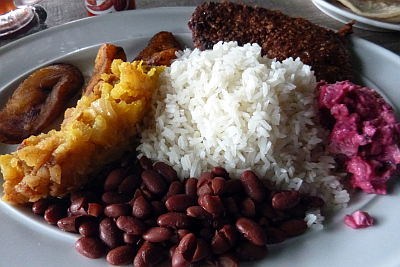 Let's be honest. Until recently, Ticos were so addicted to Gallo pinto, the tasty national dish (rice and beans, with meat or fish) that they even ate it for breakfast. In the family–run cafes called "sodas," customers demanded handmade tortillas and smoky, addictive Lizano Salsa. Surfers devoured fish tacos. That's as gourmet as things got. When Ticos wanted variety, they turned to Mexican food. 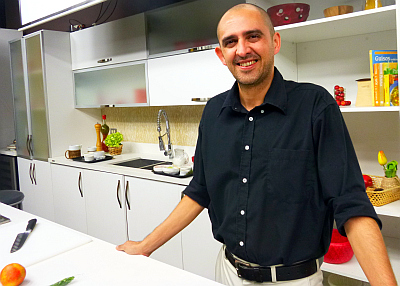 Adventurers bypass pale San José, but it's the epicenter of the new cuisine. Marco, who blogs at Tico Chef, showed me the TV studio and ultra–modern kitchen, where budding chefs piped chocolate macaroons onto parchment paper. He treated me to espresso in the café, its glass cases brimming with house–made chocolate truffles, French pastries and panini. Cooking classes and the café are open to the public.

The well–traveled Marco, a whirling dervish with a contagious love of cooking, calls chef Flora de Echandi "the queen of Costa Rican cuisine" and credits her for breaking reliance on tipico dishes. The transformation began 10 years ago with Sabores magazine and widened to include Sabores cable TV shows, with Flora as star and cookbook author.

"We use only local ingredients," Marco said. "Cassava, sweet potatoes, wild cilantro, yucca. We want to show people that you can create something beautiful that doesn't have to be complicated or difficult."

To see where all this goodness comes from, I spent several enchanting hours in Mercado Central—as colorful as any casbah. Built in 1880, this block–long covered market offers pyramids of fish, meat, fruit, vegetables, and cheeses. The cramped stalls, fragrant with fresh herbs and squeezed limes, cater to every whim. Homesick for India? A stand specializes in your spices. Need a handmade broom, flowers or local coffee beans at good prices? How about lunch? No problem. I enjoyed the tamales and deep–fried chicken at Soda Tapia (created in 1893), one of many tiny eateries. Don't miss the butchers and fishmongers in Mercado Borbón, several blocks north. 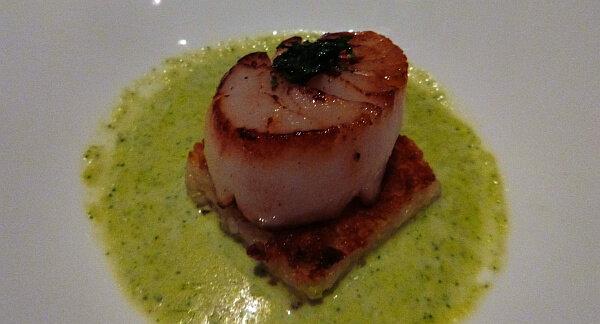 Now, where to go for dinner? Park Café for tapas, Marco had said. Bacchus for Mediterranean food. La Divina Comida for Peruvian. Pescatore for fish. Pura vida, he'd also recommended the restaurant at the Grano de Oro, and I was staying in that Victorian, 40–room luxury hotel. Behind its stained glass windows, moneyed Costa Ricans rub shoulders with foreign business travelers and honeymooners. My room came with a tropical garden; patio rooms offer tiled fountains stocked with exotic fish.