A Wealth of Wildlife in Costa Rica

Getting off the tour bus route with a custom travel itinerary, it’s easy to avoid the big crowds and commune with Costa Rica’s bounty of wild creatures instead. 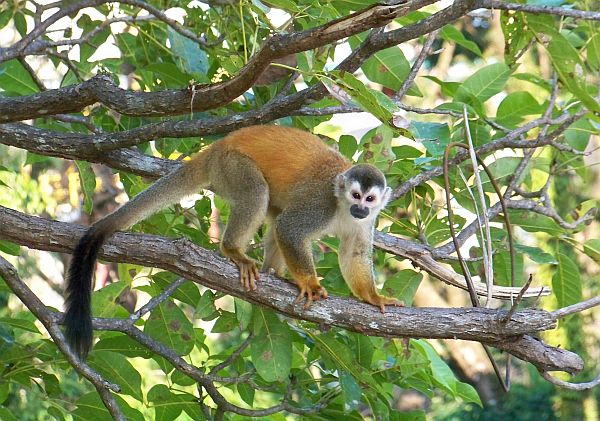 In the space of 20 minutes I had already watched a howler monkey with a baby on her back move through the treetops and seen two coatis fighting over a coconut. I watched land crabs scuttle along a decomposing tree trunk and saw tiny ones the size of a thumbtack on a rock beside the path, where two mating anole lizards were rustling the leaves a few feet away. Then suddenly there was a crashing sound and a series of loud snorts close enough to make me jump. I tiptoed through the mud and found the source: three wild peccary pigs moving through the underbrush, breaking everything in their way.

The best part of all this? I was just out for a walk on a nature trail of the adventure lodge where I was sleeping. 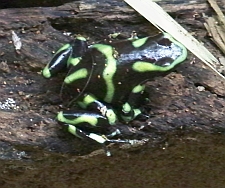 It’s pretty tough to top Costa Rica when it comes to flora and fauna. The country has 615 species of wildlife per 10,000 square kilometers—the highest animal density in the world. To put that in perspective, the U.S. has only 104 species per 10,000 kms. The numbers can be mind–boggling for such a small country: some 850 species of birds, around 400 species of reptiles and amphibians, 230 types of mammals, and more plants than anyone can really count: 1,400 types of orchids alone.

So you’ll see creatures and exotic plants regardless on your Costa Rica tour, but the quality of that experience can vary widely. When you look at brochures or websites for tour companies operating in Costa Rica, you get the feeling they are all traveling together in tandem, hitting the exact same highlights and varying only in where you’ll bed down for the night. So the two main animal–spotting areas they hit—Monteverde Cloud Forest and Manuel Antonio National Park—are places where humans seem to outnumber the animals. Having been there, done that earlier in my life, I was ready for a more intimate experience, the chance to watch toucans and monkeys move through the trees without a hundred chatty tourists around me. 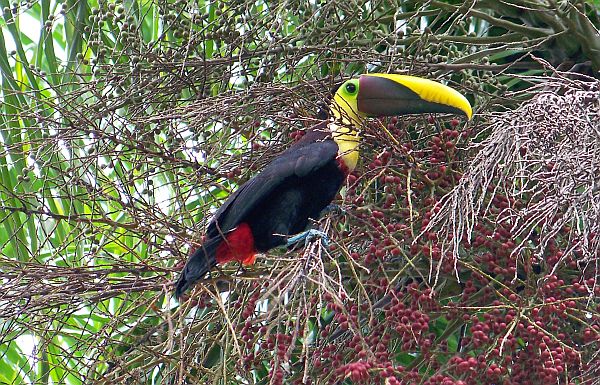 Fortunately, a deeper experience is not all that difficult to arrange in this country, the original home of the eco–friendly jungle lodge. Some of Costa Rica’s best lodges are situated on a staggering amount of land and those that aren’t often back right up to a nature reserve. The trick is to build your trip around the lodging, rather than taking a routine tour that treats your hotels as a sleep break between bus rides.

You can pretty much avoid buses altogether by making use of "the world’s first carbon–neutral airline," Nature Air. Based in the country's capital, they have flights that will get you close to almost anywhere you want to go, using a fleet of small prop planes that can land on minimalist runways cut out of the jungle. They’re simple affairs meant to just get you from point A to point B, but if time is a luxury, they save you plenty of that. You can leave San Jose on one of these and be in Guanacaste in the north or the Osa Peninsula to the south in less than an hour—with amazing views from your window along the way.

If you want, you can even use Nature Air as a tour company, with them putting you in the best lodges for your situation and getting you from destination to destination their planes. It’s easy and convenient, plus you avoid Costan Rican roads that can take hours for distances that didn’t seem so long on a map.

To the Osa Peninsula 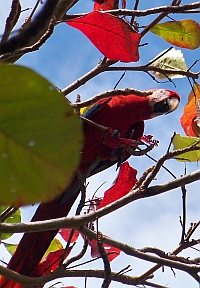 Ask anyone who knows Costa Rica well where to go to see lots of animals in a natural habitat and they’ll probably tell you to go to the Osa Peninsula. The huge and wild Corcovado National Park is here, the last great stretch of tropical rainforest in Pacific Central America. It is home to many endangered creatures you probably won’t see, like anteaters and jaguars, but hundreds more that are not so elusive, like tapirs and all four of Costa Rica’s species of primates. Land, air, and water are all a bounty, from colorful frogs to Scarlet Macaws to sea turtles.

You don’t have to rough it in the jungle on a camping trip to catch these creatures, however. In the two lodges where I stayed, Playa Nicuesa Rainforest Lodge and Lapa Rios, it’s as easy as taking a walk in the woods. Both are part of separate nature reserves packed with creatures. At Lapa Rios, my family would often walk out of our bungalow and see monkeys, toucans, and agoutis before we even made it to the breakfast table up the hill. One night after dinner, a waiter showed us a green Poison Dart Frog that was nestled in the leaves just a few feet outside the bar. 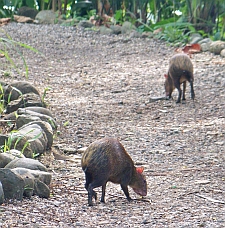 At Playa Nicuesa, guests can book a package up front that includes a tour excursion each day, or just add them on for a reasonable cost during the course of the stay. This eco–resort sits right on the Golfo Dulce and backs up to a large nature reserve, so the adventure tours hit land, sea, and rivers.

My favorite excursion was a kayaking trip that explored a nearby estuary. First a motorboat took us upriver, past sandbars and mangroves, where we saw long-nosed bats clinging to the side of a cliff and a group of squirrel monkeys scampering around near the shore. After a hearty breakfast, we boarded our kayaks and paddled downstream, with flocks of seabirds moving in and out of our field of vision. At one point the guide motioned us to head his way. There, swimming in the water in front of him, was a baby crocodile. We didn’t stick around to wait for mama.