Located next to gorgeous Plaza San Francisco in the UNESCO World Heritage historic district of Quito, this beautiful hotel in a revamped mansion is, in most respects, now the best luxury hotel in Ecuador's capital.

Casa Gangotena was long the grand manor of one of Quito's most important families, though its last look came about just a century ago, after it was rebuilt following a fire. The new owners did their own rebuilding job to turn it into a hotel, digging down under for some support areas and parking, adding on a section for other spaces. The result is a hotel full of character and historic detail, but one having all the required safety infrastructure, communication technology, and bathrooms to please 21st century guests. 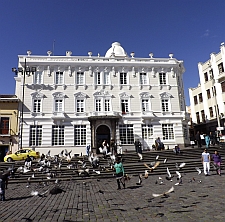 The hotel's greatest asset has nothing to do with any of that though: it's the location looking out at Quito's most photogenic plaza. The San Francisco church flanks one side, two–story buildings flank two other sides, and this hotel is on the other. The view from the roof deck or plaza-facing rooms evolves throughout the day as the sun moves across the sky and then floodlights take over at night. Large cobblestones worn down over the centuries cover the center part, where indigenous Ecuadorans in fedoras mix with tourists, city residents, shoeshine men, and pigeons.

The location is just a few blocks from Plaza Grande and within easy walking distance of the whole historic district. More modern Mariscal is a ten-minute taxi ride away.

With just 31 rooms, this is an intimate hotel where staffers treat everyone like a VIP. It starts with a sit–down check–in and a welcome drink in spacious lobby and bellmen at the ready to take care of your bags. An elevator and a grand spiral staircase lead up to the rooms, which are all large and well–equipped. The most desirable ones are the eight Plaza View rooms, especially on the second floor, though several junior suites have extras like a balcony or restored murals from the original house. 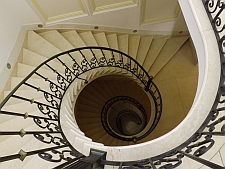 Furnishings and design elements take their cues from the early 20th century, when the last incarnation of the mansion was completed. So expect a mix of Art Nouveau, Neo–classical, and Art Deco rather than Spanish Colonial—hit the nearby churches for a healthy dose of the latter. Other touches are from the here and now, like flat–screen TVs with 90 international channels (plenty in English), cordless phones, electronic safes, and climate control. Wi–Fi is included, but works better in public areas than most guest rooms. Every aspect speaks "quality" though, from the heavy curtains and pampering bedding to high–end toiletries and separate soaking tubs. Original design elements have been retained or recreated, like intricate wall moldings, stained glass in the baths, and patterned wallpaper behind the beds. 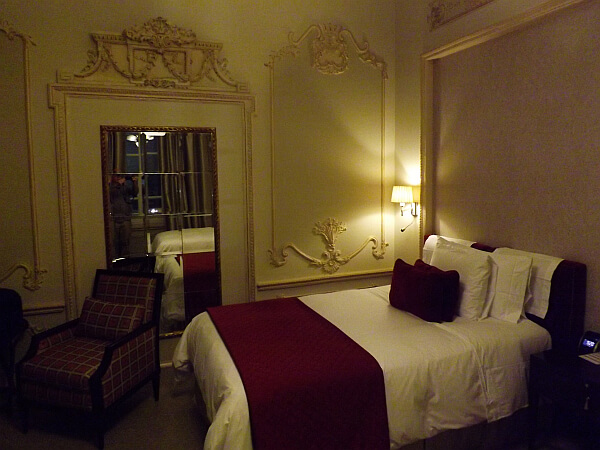 The restaurant here is among the city's best, taking traditional Ecuadoran dishes and elevating them to gourmet status with a few tweaks and enhancements. Dishes are beautifully presented, from the morning breakfast buffet through power lunches to multi–course dinners. While international dishes are on offer as well, the chef makes the most of Ecuador's bounty of native ingredients: chocolate, coffee, quinoa, seafood, and produce that ranges from tropical to cool mountain berries. Guests arriving in the afternoon from the Galapagos appreciate the high tea served under a glassed–in courtyard. 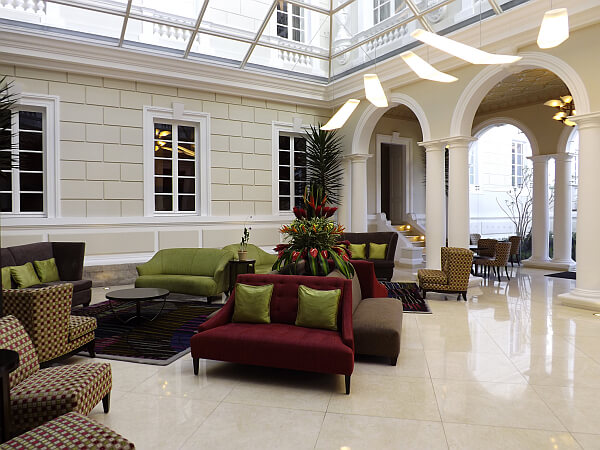 If you want to relax and read a book or just have a drink, there's an attractive modern bar next to the restaurant, a garden, an enclosed courtyard, a roof deck, the lobby, and a library room filled with coffee table books on Ecuador. Room service is available 24 hours.

There's no gym on site, but walking around this high-altitude capital provides a good cardio workout. Staffers can set up a variety of local excursions and arrange transportation. One of the best options if you have the time is to go on a walking gastronomy tour of historic Quito where you visit local shops and markets with one of the hotel's chefs, later cooking with him or just enjoying a lunch prepared with some of the ingredients. 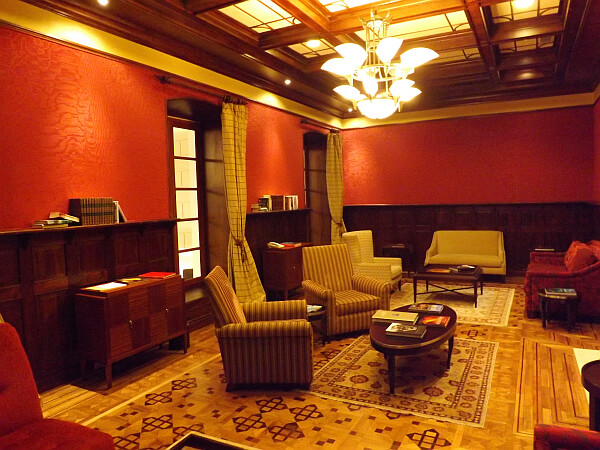 Casa Gangotena has raised the bar for luxury hotels in Ecuador and is the only Quito hotel part of the Relais & Châteaux network. Its only real competition in Quito is the smaller Boutique Hotel Plaza Grande. With nothing else on the drawing board to challenge it, Gangotena should be the prestige address in town for years to come.