A Tour of Cuenca and the Artisan Villages in Southern Ecuador


Cuenca may be the number three city in Ecuador by size, but it is a favorite with travelers for its colonial city center, agreeable climate, and stunning scenery just outside of town. 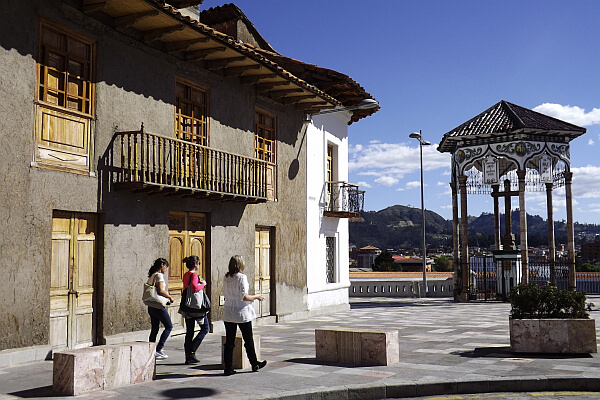 Ecuador's economy is on a roll, but the draw of Cuenca is more timeless. You pass the original cathedral built in 1557, a monastery completed in 1729, and then a bridge to nowhere built in 1850, half of it left standing when the other part washed away in a flood. In the nearby villages nestled below high Andean peaks, craftspeople perfect a lifetime of practice creating objects by the same methods their great–great grandparents used — the same as a dozen generations before that.

Sitting at around 2,500 meters (8,200 feet) above sea level, Cuenca may be close to the equator, but its elevation keeps residents in eternal spring comfort all year. The average high is around 70F all year, the average low around 50F. The variables are the clouds and rain, which come with more frequency from January through May. 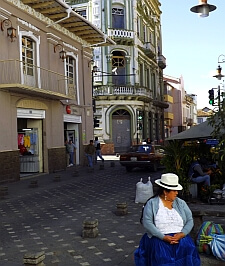 Our first day in the city requires a hat and sunglasses though as we explore the historic core of Cuenca. There have been many rises and falls here over the years, reflected in the hodge–podge of architecture. As crumbling structures were replaced by new ones, before UNESCO tagged the city a World Heritage site in 1999, there was little thought to consistency. So the Spanish Colonial buildings put up by the elites of the 1700s often abut a French–style building from the early 1900s on one side and some blocky commercial structure that looks like it was planned by the Soviets on the other.

This is an easy city to navigate in the center, with its grid structure and recognizable landmarks. The centerpiece is the commanding New Cathedral, begun in 1895 and completed in fits and starts. Beside it is an outdoor flower market bursting with color, next to the original cathedral — now a museum. 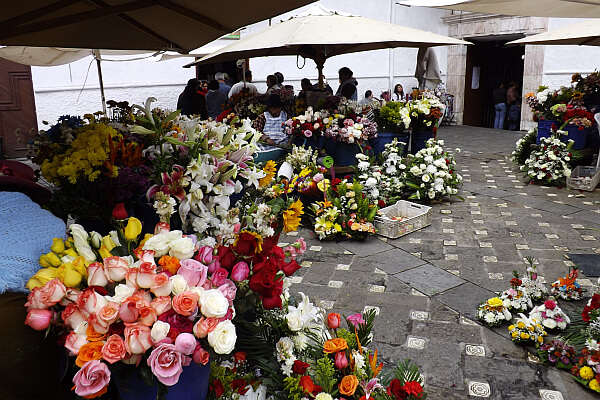 Various other churches are the focal points of attractive squares and parks where old couples sit on benches and children play in the open spaces. Vendors sell sweet and savory snacks for ridiculously low prices. One vendor shouts in Spanish, "Chicken and rice, 50 cents!" Yes, they use the U.S. dollar here, so no money changing necessary if you're coming from the states.

The main drawback for pedestrians is the profusion of smoke–belching buses careening down every street, on narrow passages originally built for horses. There are no pedestrian–only streets, a shame in this historic city that seems a natural for strolling. Thankfully relief is on the way in another form though: a light rail system with state–of–the art train cars from France is in the building stage. 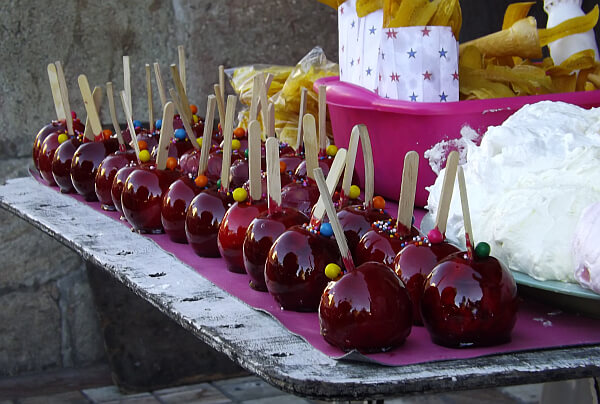 We stroll the main market, many of its food stalls featuring whole heads of pigs that have met their end, the juicy pork and corn cakes enticing passers–by to stop for a quick meal. They can grown almost anything in Ecuador, its climate ranging from tropical sea level to chilly mountainsides, so the produce stalls are stacked high with dozens of fruits, vegetables, berries, nuts, and herbs.

At dinner much of this bounty is transformed into fresh and delicious dishes at Tiesto, one of the city's most inventive restaurants. A dozen little bowls appear on our table filled with salsas, sauces, and assorted condiments. We let chef Juan Carlos 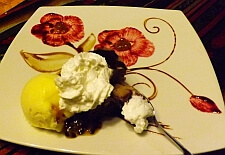 Solano decide what's best and the specialties arrive family style for us to pass around and sample. At the end he personally decorates one of the desserts and delivers it to the table.

We spend our second day in the area exploring the countryside and Andean craft villages outside of Cuenca. Various villages have taken on one specialty or another over the years, so touring this region often leads to workshops of the makers one hour and spotting their goods in shops near the town square the next. 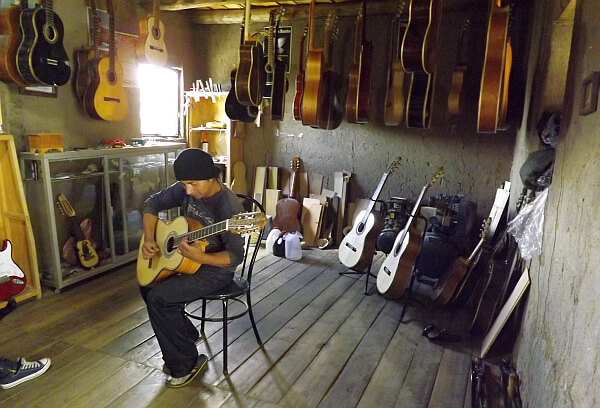 Guitar makers Jose Omero Uyaguari and his son Santiago are the best-known craftsmen near the musical instrument center of San Bartolomé. They spend one to three months building each instrument, much of that spent on the inlay work, the more expensive guitars having more details in addition to the most resonant woods. Eventually Santiago pulls one down, starts strumming, and sings us a song.

Chordeleg is less than 50 kilometers from Cuenca and is the source of many craft items you find in the province capital's shops and homes. There are weavers and embroiderers here, but we stop in to see Fernando Loja and his wife Rosita, creators of a vast array of ceramic miniatures. Most depict typical people and scenes from rural Ecuador, with traditional dress and customs. 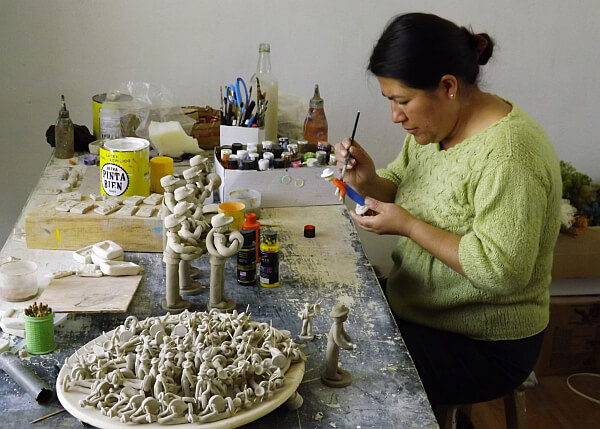 While we watch, Rosita shows us how she creates a clay figure, rolling the body and legs, putting a head and hat on, then draping over a clay shawl. She takes a fired one and makes it come alive with color by applying paint with a practiced hand. When one person in our group asks to buy it, she talks him into getting his "wife" as well. Apparently it's bad luck to display just one half of the pair. Other finished ones on display have women alone though, selling items in a market or roasting the cuy (guinea pig) bodies over a fire. 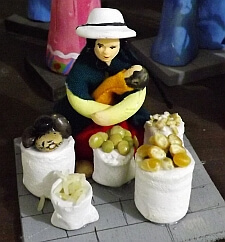 We see this scene, which has played out for hundreds of years in the Andes, as we tour the local market in Gualaceo. Women hold splayed guinea pigs with a stick through them over hot coals, as campfire kids would with a hot dog. The young women walking the aisles and talking on cell phones are trim and hatless. The older women manning the vegetable stalls and carving up the pork are all rotund and wearing a fedora. Apparently after 30 or 40 years those mounds of starchy white and yellow foods here erase all curves. The squat clay figurines have come to life.

Gualaceo is also the leather shoe center of the region and most of the ones on display in the shops are surprisingly well–made for their price tags of $17 to $45, the latter being calf–high boots.