Day of the Cormorant: Why the Galapagos is Better by Yacht

Story and photos by Candace Dempsey


By covering long stretches at night while sleeping and going beyond the standard short-jaunt Galapagos land-based trips, a visitor enjoys the leisurely pace of a small ship cruise. 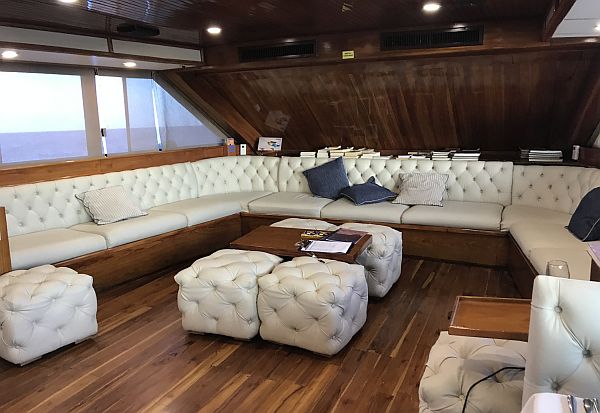 I never expected to joust with a carnivorous South American sea bird in the Galapagos Islands, a scene straight out of Alfred Hitchcock's famous horror film, "The Birds." I didn't see the burly flightless cormorant, one of the world's rarest birds, until it attacked me, about 600 miles west of the Ecuador mainland. I was snorkeling under a pale blue sky in wind-tossed waters off Isabela Island. All was bliss. Visitors aren't allowed to get up close and personal with the wild animals in this protected archipelago, so even sharks and stingrays tend to be laid back. I'd nearly stumbled over baby sea lions dozing on the beach at Tagus Cove. Land iguanas practically begged me to step on them.

Near the end of a seven-day Ecoventura luxury cruise, I'd already swum with hammerhead sharks, tiny Galapagos penguins, fat sea lions and lumbering sea tortoises. I'd snorkeled over schools of golden rays and rainbows of tropical fish. Since my goal was to spend as much time in the sea as possible, I was thrilled to share a cozy live-aboard cabin with my friend Amanda instead of embarking on a land-based tour. 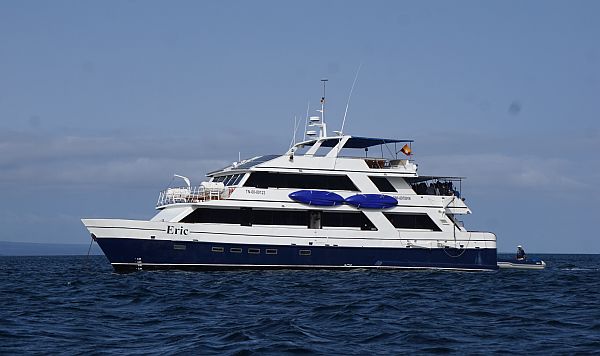 Our boat, the Eric, carried only 20 passengers. We had plenty of time for hiking plus two daily water activities: snorkeling, kayaking, swimming, or stand-up paddle boarding. Even better, Ecoventura's "Wild West" route skims the northwest corner of the Galápagos, where the most exciting animals hang out. Three of the islands are off-limits to land-based travelers: Genovesa, the place to see fur seals and hammerheads. Fernandina, with a smoldering shield volcano. Rábida, offering magnificent red sand beaches studded with nesting sea lions. We also took in San Cristobal, Santa Cruz and Santiago islands.

Shaped like a seahorse with six volcanoes crumbling in the center, Isabela is the archipelago's largest island, a rich ménage of mangrove swamps, rockeries, marshy wetlands, and desert landscapes. On the wild, northwestern side, Tagus Cove was once a haven for pirates, whalers, hard-scrabbling farmers, and adventurers. Charles Darwin arrived here in 1853, aboard the legendary HMS Beagle. The blue-footed boobies, short-eared owls, Darwin finches, land iguanas, swooping brown pelicans, and other oddities he encountered factored into his theory of evolution. I'd looked forward to snorkeling in Tagus Cove, because it's one of the best places to swim with sea tortoises and marine iguanas. Darwin called the latter "disgusting, clumsy lizards," but I couldn't wait to catch sight of them, munching on the green algae that carpets the cove's bottom like a cow pasture.

The sky over me was alive with frigate birds, hovering over the silver-edged Pacific like fantastical black kites. I barely noticed the flightless cormorants, waddling across wet lava rocks on the shore, waving tiny, useless wings. These curiosities live only on Fernandina and Isabela islands. There are only about 1,000 breeding pairs left in the world, but they lack the mystique of the waveless albatross (which we couldn't see because it was the wrong season). Cormorants reminded me of little men in damp, brown flannel suits, bumbling around. Indeed, they're the only cormorants who've lost the ability to fly. I didn't realize they were whizzes underwater, diving down to spear their prey: fish, squid, octopus.

As I swam in the cove, I kept holding my breath, plunging down to get as close to the bottom as possible. Finally, I saw a little brown marine iguana wiggling in the water. But before I could get close to it, something pinched my arm-very hard. I felt the jabs through my wetsuit. I shot to the surface and pushed back my mask.

A large, flightless cormorant rode the surf, only a few feet from me. It stared at me with tiny, neon blue eyes. It tilted its helmet head, the better to display a long, viciously sharp beak. 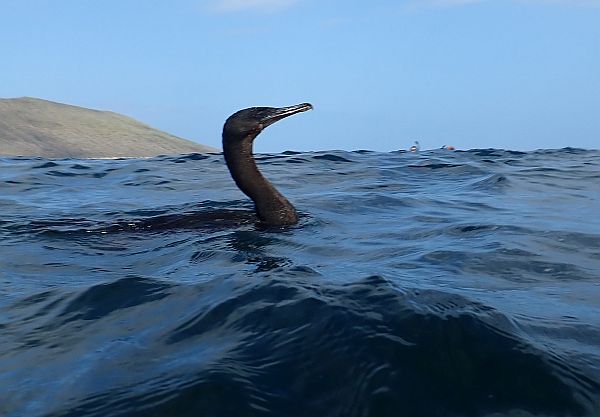 Then it barreled toward me, propelled by powerful webbed feet. It steered with its miniature wings. I tried to wriggle away, but it pursued me. It was like being chased across the water by a crazy person brandishing gigantic kitchen shears. Luckily, I remembered a childhood trick I'd used to defeat my brothers during water fights at the lake. I flipped over on my back. I kicked at the bird with my flippers. I kicked and kicked. I also managed to switch on my camera and grab a few angry bird shots.

Finally, the cormorant gave up. It dove down into the water and disappeared. I swam to a waiting panga boat. A few minutes later, I was back aboard the ERIC, my home away from home in the Galapagos.

I chatted with Amanda and the other passengers over appetizers and chilled Pino Grigio. Most of us were in family groups, and from the U.S. The small group size and close quarters made for instance bonding. Every night we watched the sunset over the Pacific and then met for a gourmet dinner. Passengers aboard Ecoventura's new MV Origin get even more pampering: a gym, Jacuzzi, WiFi and other amenities. It recently joined the prestigious Relais & Châteaux Association, a worldwide collection of luxury hotels and restaurants. I bookended my own trip with first-class accommodations in Guayaquil on the mainland: Hotel del Parque and Hotel Oro Verde Guayaquil.