Moving around the bays of the Galapagos Islands is a shared experience no matter what tour company is leading the way. Putting myself in the hands of Angermeyer Cruises and their 16-passenger ship, I learn to love what comes out of a small-group tour that does it right. 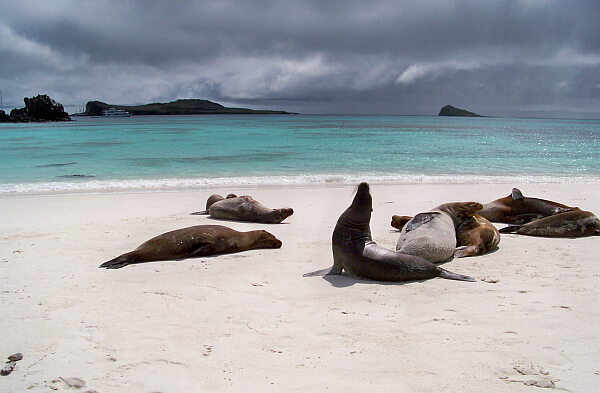 You think you know what to expect on a trip you’ve read so much about, then your jaded attitude gets thrown out the porthole. There are things I learn about the Galapagos Islands that blow me away. For one, there’s really good snorkeling, as in swimming around with sea turtles and sea lions while Hieroglyphic Hawkfish and Diamond Stingrays nibble right underneath your toes.

Second, these islands as a whole are quite large, especially 80-mile-long Isabela, but tourists only step on 0.001% of the land set aside as a national park—and the national park is 97% of the total land mass. On some islands nobody comes ashore except scientists, and only then after an extensive quarantine that includes the spraying of all clothing (underwear included). 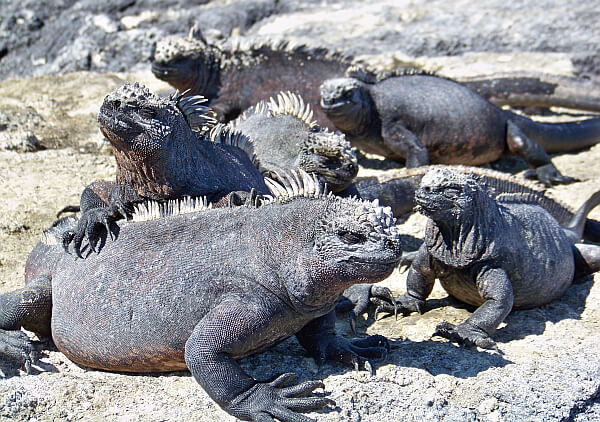 The animals here really don’t seem to care a bit that we humans are around, snapping photos and getting in their face with a video camera. The only creatures that seem at all skittish are the bright red and yellow Sally Lightfoot crabs. The giant tortoises may hiss sometimes and the land iguanas start bobbing their heads if they feel threatened, but you have to get really close before they care. If you don’t get good photos here, then you should hand someone else your camera for good.

I also don’t expect to be wearing a windbreaker in the middle of the afternoon, right after donning a wetsuit to go swimming in the cold water. Isn’t this place on the equator?

Currents of Life in the Galapagos 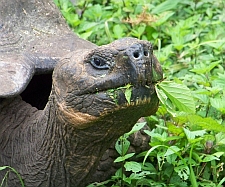 Yes these islands are on the equator. They are part of the country that took that latitude as its name in Spanish—Ecuador. As every ship’s guide will tell you, however, there are strange things going on in these parts. This fountain of life has its roots deep in the sea, where the Humbolt Current carrying very cold water from Antarctica mixes with the warm currents flowing down from Central America and heading west. Up come the nutrients, giving the life forms here a ridiculous food chain buffet, minus the predators and “run for your life!” threats that most of the planet’s creatures endure.

The life forms here developed independently. “They have never been attacked by a bear, a lion, or anything else big and scary,” says Alejandro, our guide who has been leading visitors around these waters for two decades now. But what about the human whalers and pirates who visited in centuries past? They certainly did their share of hunting and pillaging. “The visits were too infrequent and they were short,” he says. “Man did not make enough of an impression to impact the genetic memory. And now we are no longer a threat.” 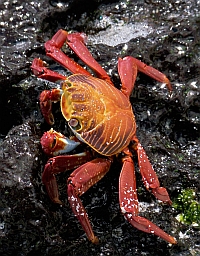 We visitors follow strict regulations to keep it that way. Nothing comes onto the islands outside the permanent settlements and nothing goes out. If the customs people find a seashell or little bottle of sand in your outgoing luggage, it’s a major incident subject to fines. Trails are narrow and marked. Snorkeling only occurs in designated areas. The best operators—those like the Angermeyer group and Metropolitan Touring that are involved in local initiatives like Fundacion Galapagos Ecuador —go beyond the national park guidelines on their own. I’m happy to see that my small ship has biodegradable soap, a water desalinization machine, and reusable water bottles for each passenger.

I’ve heard bad reports of overcrowding and an overpopulation of residents in the Galapagos, so I’m pleasantly surprised by how well the regulations and ongoing conservation efforts appear to be working. I can’t remember the last time I’ve gone snorkeling without seeing even one can or bottle on the seabed, nor the last time I’ve walked for a half hour on a beach without seeing a single plastic bag. Neither is possible without a coordinated effort from a variety of stakeholders—litter that comes from deltas 1,000 miles away still washes ashore—but both the government and the business leaders work hard to counter the outside forces. 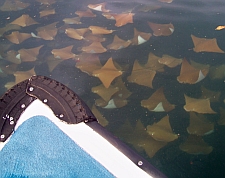 I’m on an eight-day cruise on the 16-passenger ship Sagitta, with her sister ship Mary Anne following the same route. (UPDATE - The Sagitta has moved north to other waters, but the Mary Anne carries on here.) This is an ideal size since only 16 passengers at a time can come ashore on the islands anyway. The bigger cruise ships may have massage rooms and a hot tub on the deck, but passengers have to be divided up to come ashore in shifts. On a boat that holds more than 100 people, cycling them through in one stop can take half a day. Here meals are announced with a ring of a bell, we can all fit around a communal dining table, and by the end of the week we all know each others’ travel stories and dining preferences. The guide doesn’t have to spend days learning everyone’s name.

It’s always service that separates the ordinary tour from the special tour and here Angermeyer Cruises has an edge. The company has been doing this for decades (founder Fiddi Angermeyer grew up on Santa Cruz Island) and the company is willing to pay for the best guides and chefs. Our guide, Alejandro, teaches new guides in classes through the Darwin Center. Our meals are surprisingly varied and fresh, especially considering most of the food is picked up on a single supply run on Day 2. The massive lunch that comes out on Sunday is a feast of Ecuadorian dishes and desserts and we are surprised as wave after wave of serving platters comes up from what is a small ship’s kitchen. Other meals bring bacon–wrapped filets, fish platters, and colorful salads.

All 93 licensed passenger ships that ply the waters of the Galapagos National Park have the same availability of designated spots where they are allowed to visit. So the differences in the various tours come down to the ship, how far that ship can go, and quality of the guide(s) and staff. Everyone is seeing the same blue–footed boobies and sea lion cubs.