In a newer, larger, and more refined location, this Relais & Chateaux property, one of only two in Ecuador, is among the elite colonial era constructions in Quito’s UNESCO World Heritage center. Fine attention to detail and superb restorations set it apart.

In most hotels after a good nights rest you feel like you have awoken in your own bed. In Mansion del Angel, you awake and feel like the King of France. 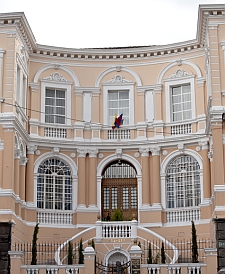 Quito’s world heritage center has seen several important colonial buildings turn boutique hotels in the past five years. Most of the hotels provide a mix of old world décor and contemporary style. Mansion del Angel has been considered one of the best colonial properties since it opened its original property in the more modern Mariscal district.

At the end of 2009 the owners sold the original house and moved to a new location with 15 rooms instead of 11, in a building that looks down, from just a block away, on Parque Alameda. The Republican era mansion was built at the turn of the last century and completely restored. Originally designed by an Italian architect who based much of the surrounding neighborhood on his native country, the mansion was once the home of an Ecuadorian tobacco tycoon who used the large halls of the ground floor for entertaining buyers and guests. The rooms vary considerably in size and shape, though the style is more or less uniform throughout. Much of the décor – the oil paintings, silver platters, the antique wooden furniture, the four-poster bed frames, the statues, and ornate lamps – has been brought over from the old hotel. It just fits so much nicer in this building that you might not recognize it. More pieces have been added as well.

The larger rooms add various nooks and sitting areas. Room #205 is by far the best. It’s huge and the most elaborate. If it weren’t for the satellite TV and DVD player, you would think this is King Louis the IV’s bedroom. It’s grandiose, opulent, royal, and over the top. It has a large porch that leads down into the gardens, which are well manicured and frequented by all sorts of rare avian life.

One downfall of this old building is that the bathrooms in every room are somewhat smallish. Rather than having the colonial character of the rest of the house, they’re modern and rather plain.

Service is well thought out. You’ll find a hot water bottle at the foot of your bed to warm your feet at night. They provide complimentary afternoon tea and a bigger than normal breakfast for an Ecuadorian hotel, with fruits, cereals, yogurt, pastries, bread, cheeses, meats, and eggs. In the evenings the kitchen turns into a small bistro with just a handful of items like Quiche Lorraine or quinoa and cilantro-crusted sea bass. The entire menu is available for room service too.

Mansion del Angel is not as close to Plaza Grande as the center’s other well-known boutique colonial hotel, the Plaza Grande right on the plaza. You can reach the plaza in five minutes in a inexpensive taxi ride, however, or walk it if you're up for the exercise, and this mansion is half to two-thirds the price for a comparable setting.

Text and photos by Nicholas Gill