Traveling Mainland Ecuador, from the Clouds to the Devil's Nose

Wanting to see more than just the standard tourist stops, a traveler's return to Ecuador ventures to the cloudforest, the reviving rails, and the volcanoes south of the capital. 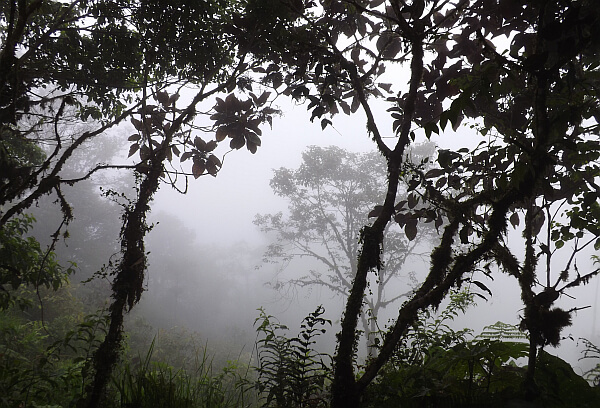 I spent my first night outside of Quito sleeping in the clouds. The ever-present fog gliding past the picture window in my room when I arrived only occasionally dispersed. When it did, I could see distant ridges in view from the lodge's roof deck, colorful tanager and mot-mot birds flitting between trees nearby. Then a moment later, the lodge would be enveloped again. It was a regular reminder that I was in a very special place, sleeping well and eating delightful meals, but in a nature reserve in the cloudforest.

My mainland Ecuador journey with Metropolitan Touring was meant to emphasize the country's variety. Named after the equator it sits on, Ecuador is a bountiful place that can grow most anything in its rich volcanic soil, from tropical fruit on the coast at sea level to berries and apples in the cool mountains.

While getting acclimatized to the high altitude in Quito, I walked the city with a guide. I set out first on a gastronomy tour with one of Casa Gangotena Hotel's chefs to sample the local food, then wandered some lesser-known parts of the historic center, including a local school funded by the private sector that passes on traditional artisan skills to the next generation. 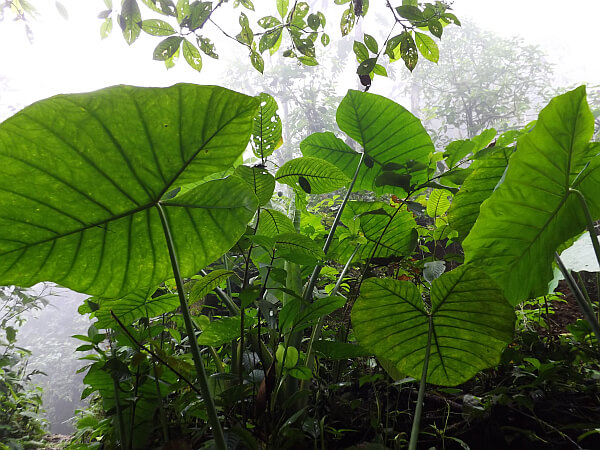 When I made the three-hour journey northwest to Mashpi Reserve Lodge, I found a striking modern edifice of concrete and glass perched on a small shelf overlooking a carpet of dripping green cloudforest. This is a nature reserve in recovery-part of it was logged decades ago-but it doesn't take long for the trees and vines to take back their land in this wet environment. A gondola that was under construction when I visited will carry guests into older primary rainforest areas for additional hikes.

I donned rubber boots to go exploring here: the paths in this are perpetually muddy. The experienced naturalists on site are adept at spotting the various birds and insects that make their home in this preserved forest of more than 3,000 acres, whether along the paths or from the observation tower that rewards our climb with a view over the treetops.

The best canopy view was from the skybike, a two-person pedaled seat that moves along a suspended cable traversing a valley. Like a slow-motion zipline with brakes, it allows riders to see what the birds are seeing and maybe catch a few pale-mandible aracaris, toucans found mostly in this region. After our ride is finished, I hike with the naturalist through the thick vegetation. We pass flowers, colorful berries, and trees that are never just trees: most have a dozen other plants growing in, on, and up them, not to mention all the four- and six-legged creatures using part of the infrastructure as a home. 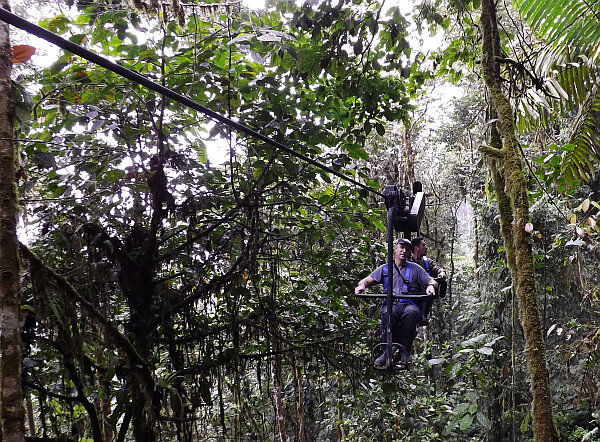 Eventually we come to a clearing where the butterfly sanctuary is located, an enclosed area where guests can view a whole variety of species and see the breeding process. Outside, more of them float around, joined by a variety of hummingbirds feeding on a few ornamental plants put in for their benefit. We watch a parrot in a tree with binoculars, then sit down to enjoy a chocolate tasting. With a good Chilean cabernet, I get to sample a variety of Pacari Ecuadoran chocolate, including some made with pink salt, lemongrass, or chili peppers. 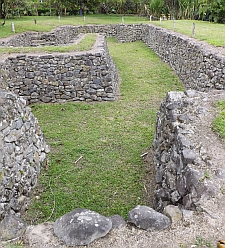 After a few days and nights in the clouds, it was time to descend to man's world again. Bumping down the dirt road that turned onto one with asphalt, the sun appeared like a great god who had been hiding. Fittingly we stopped at an ancient place where the natives worshiped the sun—Tulipe. In the region named after it, the Tulipe ruins outdoor museum comprises terraces and structures built by the Yumbo people, merchants and equator-straddling astronomers who lived in the region from 800 to 1660.

Riding the Rails From Quito to Cotopaxi

On my first visit to mainland Ecuador a few years back, I was a typical tourist. With just a few days on the mainland after a cruise in the Galapagos, I spent all my time in Quito, with a side trip to popular Otovalo and Cotacachi nearby. This time I wanted to venture south, to ride the resurgent rails and see volcanoes reaching so high that they're topped by snow, even this close to the equator. 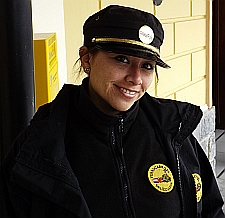 After overnighting in Quito, I rode with a guide and driver through traffic to the Chimbacalle train station in an industrial section of the city. The recently spruced-up station is delightful, with many of its historic features gleaming and an attractive coffee shop for some morning energy. All the staffers wear retro-cool Tren Ecuador uniforms. The bilingual service people sorting out tickets later board the train cars to serve as guides. A small museum explains the glory days, when these tracks preceded roads and 45 trains a day left from Quito.