As Quito's colonial heart continues to improve each year, the historic center's original Patio Andaluz is having trouble keeping up. It was the first hotel to stake its presence in the capital's World Heritage–listed heart and despite its shortcomings, it's a good alternative for those who want a sense of place in a perfect location; it's a block and a half from the city's main square, Plaza Grande.

Boutique hotel Patio Andaluz is stuck in time, in a good way and a bad way. The décor manages to conjure an ambiance of the colonial era, with plenty of dark–stained carved wood, original and reproduction colonial art, heavy upholstery and the odd objet on display. These touches sometimes combine awkwardly with modern or (more commonly) utilitarian features, making for an ill marriage. The hotel occupies two patios of an old Quito mansion, one behind the other, comprising the former residence of the 17th–century Marqués de Jerez and a string of noble families down the centuries. The adaptation of the buildings was intelligently done, covering the patios with glass roofs, although the poor ventilation in the hotel is probably its biggest drawback apart from the lack of refurbishment in the rooms. 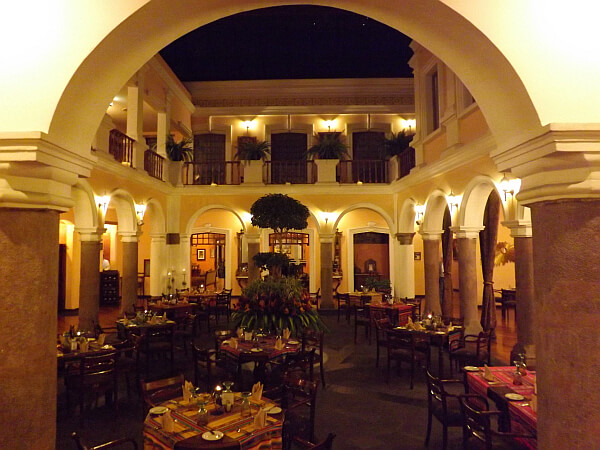 The lobby is a quick way station, but the gift shop facing the street is one of the best places in the center to find quality items from the Andes. The large courtyard, bright in the day, romantic at night, is occupied by the good Ecuadorian–International restaurant, which has a generous breakfast buffet, a lunchtime set menu and a decent a-la-carte menu in the evenings. They also serve a range of traditional Ecuadorian small dishes, including a selection platter, which is a great way to discover the country's local cuisine.

The rooms are distributed over two levels of the two patios. The ones to go for are the duplex models located in the first patio. Six of these give on to the main street below, while the remaining five all enjoy an inner balcony up in the eaves of the glass roof giving onto the patio. The street-side rooms are quiet despite the traffic noise, but the hotel perhaps overdid it, in that you can't actually open the French windows to poke your head out and people watch at all. All the duplex rooms come with a large bed and flat-screen TV on the lower level, with a sofa, armchairs and bathroom upstairs.

The rooms in the rear patio, despite being of a good, comfortable size, all suffer from lack of light and air. Their single windows give onto the patio alone. By the late afternoon, the ones at the back are decidedly gloomy. They don't come with air conditioning either, so for some they can be too stuffy. Some top floor suites have a skylight. All rooms have electronic safes, some kind of TV, and basic toiletries in the well-kept tile baths. 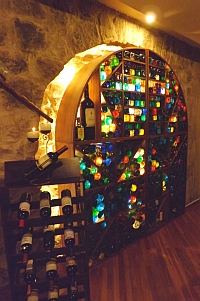 Desks are a squeeze for a laptop, but fine for postcard writing. Straddling the two patios on the ground-floor level, an appealing room has free tea and coffee, a reading library and comfy sofas. There are a few computer terminals dotted about in quite random places over the two floors, with pretty slow connections. Wi-Fi signals can be equally spotty with the thick stone walls, but it's included in the rates.

In the lower level of the rear patio, attractively tiled in blue mosaics, you find the hotel's wine cellar-like bar, with a huge TV screen and an attentive barman. It has original stone walls exposed and wine bottles lit with colored lights.

The Patio Andaluz is not competing anywhere near the same level as Casa Gangotena, Plaza Grande, or less ideally located Mansion del Angel, but the price is right if your time in the city is short. It wins for its well-trained and helpful staff, its attractive décor, historical setting, great location, and its mezzanine rooms. It needs some serious room refurbishment to be a true luxury hotel, but is still an excellent choice for those who prefer colonial architecture over modern glitz—and who balk at paying $400 or more for a room in Ecuador.