Originally known as Cuscatlán, “The Land of Precious Things,” El Salvador offers its cultural and natural treasures only to savvy travelers, those open to undiscovered adventure. And of course, exploring this compact paradise can be done in comfort and style, thanks to Los Almendros VIP Tours. 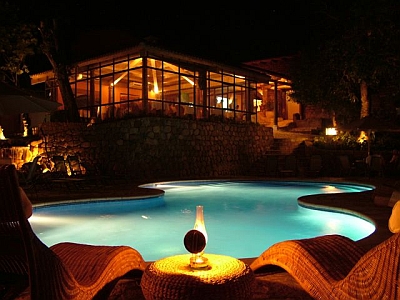 As intrepid arrivals glide through El Salvador’s epic green-and-gold volcanic landscape, punctuated with whitewashed churches and wending rivers, they are inevitably charmed. Crater lakes, artisan towns, world-class surfing beaches, and uncrowded ecotourism opportunities are all within a few smooth hours of each other, thanks to a modern highway system that is the envy of all Central America.

Your base, Los Almendros de San Lorenzo, is in the heart of colonial Suchitoto, El Salvador’s “Cultural Capital” and close to the geographic center of its wonders. Though sometimes compared to other colonial destination cities, such as Antigua or Oaxaca, Suchitoto is a smaller, more intimate experience. 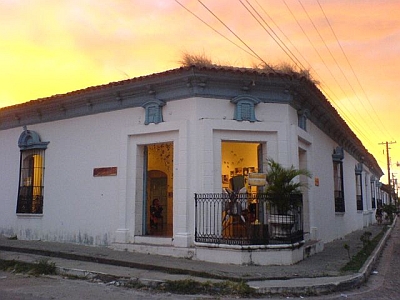 And it is lovely. Quiet cobbled streets connect the old adobe colonials to a festive central plaza, its columned arcades presided over by the 1853 church Iglesia Santa Lucía, star of many a Salvadoran tourism campaign. All have been well maintained, their ancient oversized wooden doors and red ceramic tejas-tiled roofs still imbuing the small city with an enjoyable architectural harmony. 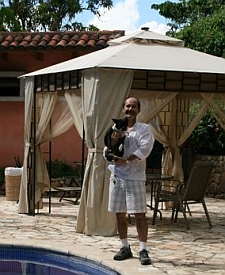 Today, this city originally built by tobacco and indigo barons, now houses some of the El Salvador’s finest restaurants and hotels, fascinating art galleries, friendly cafés, and wonderful handicraft shops. Just beyond the borders of its strollable center are some of the country’s most accessible ecoadventures.

But first, before you begin to explore, let Pascal Lebailly, the gracious owner of Los Almendros—and his delightful Boston terrier, Lorenzo—welcome you to their home and hotel.

“Los Almendros caters to luxury travelers who feel as though they have seen the world, and want to experience something that none of their friends have known,” explains Pascal, a French expatriate who thus far works mainly with European guests. “They love the freshness of El Salvador, but have very high expectations.” 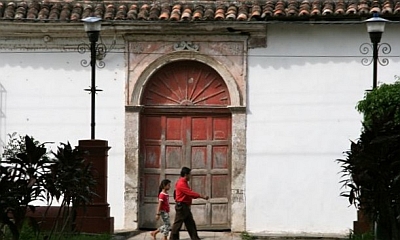 Los Almendros does not disappoint. The gracefully designed hotel was originally built in 1805 for the wealthy Bustamonte family, among the region’s original landowners. Two centuries later, when Pascal discovered the formerly fabulous estate, it had been reduced by history to a sagging echo of its former palatial presence. Yet he understood immediately that its thick adobe walls, sunny courtyards, and spacious rooms would be perfect for what he had in mind.

Pascal, who spent much of his life in the Paris fashion world, had been looking for the opportunity to open a unique boutique hotel that reflected both his own impeccable tastes and a posh sense of place. Suchitoto appealed because its incredible ecotourism opportunities, rich cultural heritage, “and perfect weather,” Pascal smiles. “It’s almost always sunny here.” 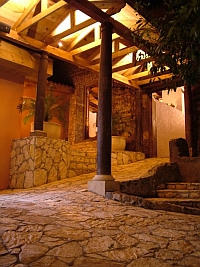 First, he hired Salvadoran architect José Robert Geishman, an expert at dramatic colonial rebirths. The detailed technical restoration took more than 17 months, some 30 workers laboring overtime to preserve as much of the original structure as possible. Thus the wooden beams stained almost black with age, the original ceilings suspended 4.5 meters above the thick adobe walls, and old beehive-shaped ovens now illuminated with candles at sunset all remain.

In the meantime, Pascal began his quest for the perfect décor, importing ceramic tiles and dramatically colored flagstones from Colombia and Honduras, rugs from Marrakesh, furnishings from Thailand, and chandeliers and other ironwork from Guatemala.

The gorgeous headboards came from here in Suchitoto, colonial-era doors rescued from the city’s forgotten buildings. Comfortable woven reed furniture nestled beneath the courtyard porticos is very typical of Western El Salvador. The refurbished walls were hung with original work by Salvadoran artists such as Guillermo Perdomo, while famed Salvadoran painter Luís Lazo was commissioned for the impressive mural in the lobby.

Admire the mural before you begin marveling at the rest of this masterpiece of colonial restoration, then follow the antique-bedecked terraces surrounding that first sunny courtyard. Threaded with fountains, flagstone pathways, and a tiny stream, the trickling water makes each afternoon here that much more relaxing. The six unique rooms—try to get the sunny suite with its own fountain—are arranged around this soothing scene.

The second flower-filled courtyard, made even more dramatic by the exposed adobe wall left untouched from this place’s earlier era, is centered on the exquisite pool. Surrounded with flagstones and the ripple of gauzy kiosks shielding guests from the midday sun, it is almost two meters deep, to stay cool on the hottest summer days.