Casa Santo Domingo has reigned as the best hotel in Guatemala since it opened in 1989, partly on merit and partly by default. This 126-room converted convent remains the best choice in central Antigua for luxury travelers who want plenty of amenities at their fingertips.

Coming off like a less reverent and polished version of Hotel Monasterio in Peru, Hotel Casa Santo Domingo functions like a museum with overnight guests. The convent was founded in 1542 and many of its surviving buildings are from the 1600s. After periods of earthquakes and pillaging, however, some of the buildings are mere heaps of rubble and the hotel shares part of the grounds with an archaeology museum. 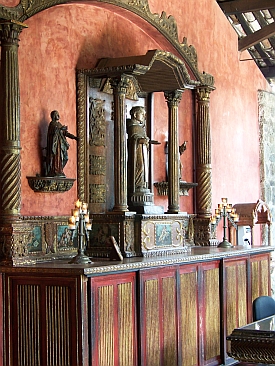 As would be expected, religious artifacts are around every turn, from the grand walkway in from the unassuming entrance to the hallways leading to guestrooms. A saint statue here, and alter there, and angels smiling down on you from the heavy rafters above. Finding a quiet corner for pondering it all can by a challenge, however. The hotel's public areas are tourist attractions on their own, the museum entrance is inside the grounds, plus a convention center hosting up to 600 makes the place a constant hive of activity. Perhaps because of this, sitting areas are quite limited in the lobby area and the courtyards where tropical birds pose for photos.

The best bets for escape are the refined restaurants and bars, though most are better for drinking than dining. The main bar and restaurant are evocative spaces that give a real sense of place, but unfortunately the food here seldom rises above Guatemala's reputation for blandness and lack of imagination. Waiters seem downright perplexed every time a foreign diner complains that what's on their plate is not what was described on the menu. For romantics though, it's hard to top the historic ambiance by candlelight at night.

Fortunately the bar spaces, with their original stone walls, make up for the cuisine and this country's rum is in many critics' opinions the best in the world. Within a 15-minute walk, there are probably 50 other places to choose from in this strategically located hotel.

The large swimming pool—effectively blocked off to non-guests—is inviting in the daytime but even more enchanting at night, when the light reflects off the historic stones and arches. A staffed business center is on site and a concierge can arrange local excursions.

The most basic Estancia Tradicional rooms here harken back to the days of nuns' quarters in terms of size. Online their photos require wide-angle lenses to even get the room in the frame. But they are well equipped with fireplaces, minibars, and baths with tubs big enough for soaking. Stucco walls and local art add some visual interest, while the furnished balconies and extensive toiletries make even the smallest rooms feel special.

Upgrading for more space costs very little though, all the way up the scale, so skip the bottom category the tour groups occupy and get some space. The suites here are a true bargain and are well worth the premium. For the price of a standard chain hotel room at home, you get more than twice the space of a standard, a spacious terrace (some with Jacuzzi), better furniture, and original 17th-century oil paintings on the walls. Room service runs until midnight.

Despite the fame, there are many signs this is a hotel geared to groups, including theft-proof hangers in the small closets and a charge for purified water. Expect some glitches along the way too, especially when it comes to service. Casa Santo Domingo still scores in magazine reader polls as the top hotel in this city without even trying, so nobody has instilled a sense of urgency with bellhops, waiters, and front desk clerks. Slow down to their time and you'll be less frustrated. If you don't need all the facilities here and are happy with a smaller property, there are some excellent inns in Antigua that will make you feel more pampered.