Discover the finest hotels and Journeys in Mexico, Central America, and South America

Adventures in the Mayan World of Guatemala

A circuit of Guatemala from the capital to Antigua and Xela reveals a shaky history, unique adventures, and a shaman's guidance to another dimension. 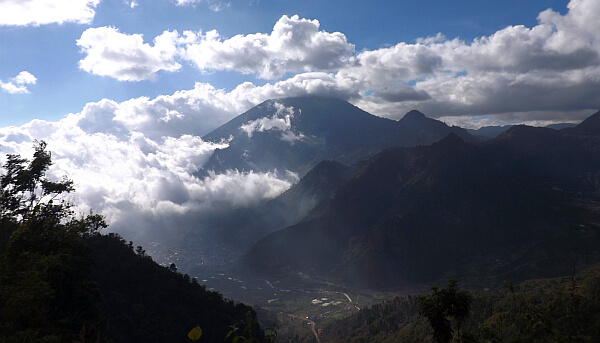 As the guest of honor, I'm supposed to light the flammable items my female shaman has laid out in an elaborate pattern as we watched. It should be easy to make the candles and wood chips go up in flames, but it's a very windy day and we only have a quarter pack of paper matches. As soon as there's the start of a flame after striking, the wind dashes it out in a micro–second and we're left with nothing.

As the last match goes the way of the others despite multiple hands to shield the wind, I sigh and my guide trudges back to the parking lot to find another pack. Our shaman continues to kneel beside the colorful spread and chant away in a Mayan language I can't understand, continuing urgently, non–stop, as we wait for more fire starters.

Up to now my tour of central Guatemala has gone swimmingly all week, so have the gods decided it's my turn for some misfortune?

A Giant Map and Superlative Rum

After landing in Guatemala City on a short flight from the north, we dine at the bi–level El Adobe restaurant before exploring the main plaza in the historic center. The year the United States of America declared its independence, the Spanish territory spreading southward was on its third official capital. The first one was destroyed by volcanic mudslides. Next Antigua (then known as Santiago de los Caballeros) got rattled one too many times by earthquakes, forcing a move. This newer capital wasn't immune from the quakes either though: while the cathedral fronting one side of the plaza is original, many other buildings are replacements for earlier structures, including the National Cultural Palace, completed in 1943. 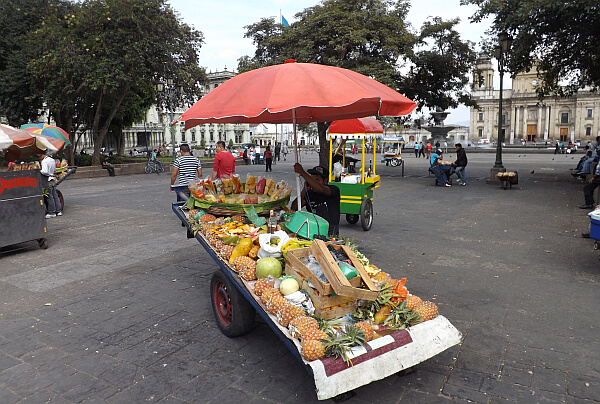 We stroll the plazas and check out the fruit vendors before making our way to Mapa Enrelieve, an impressive outdoor topographic map of Guatemala. Engineer Francisco Vela made it in only 18 months after surveying the entire country and recreating every hill, mountain, lake, and river. It offers a real grasp of the geography of this region, from the high volcanic peaks that are still active to the lowland areas growing tropical fruit and sugar cane. 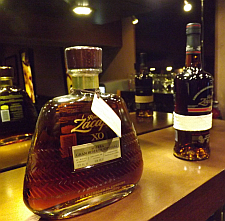 After checking in at Vista Real, I get to sample some of the refined output of that sugar cane, with snifter glasses of the country's best rum at Villas Los Añejos. Ron Zacapa is not as well known as the huge Caribbean brand names, but it wins a lot more acclaim from spirits reviewers and serious rum fans. Its sister brand, Ron Botran, is put out by the same company.

The cane is grown at 300 meters, but unlike the island rums, Zacapa and Botran are distilled and stored at 2,300 meters, allowing them to age in barrels with less intense tropical heat. The result is a much smoother rum than most others, with a complexity that's not overpowered by a molasses backbite and heavy wood domination. We go through the versions aged 15 and 18 years from the two brands, then the prized 25–year Ron Zacapa version, which is divine. There's also a 23–year XO version: this is a mixture of barrels with rum aged up to 23 years, combined with fine cognac. It's a completely different taste sensation and seems like the perfect after–dinner drink.

The sugar used in Botran rum is harvested near the beginning of the year, while the sugar used for Zacapa is harvested late in the year. Apparently this is enough to create a different flavor profile as the two have their own distinct personalities. And as with most things in central Guatemala, there's an earthquake angle: the barrels are stored standing up while aging, rather than on their sides. That way they're more stable when the earth shakes. 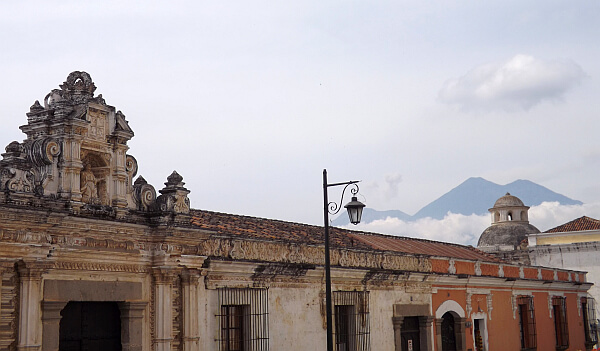 The Rebuilt Ruins of Antigua

A short drive the next morning brings us to the jewel of the country's tourism crown, the traveler magnet of Antigua. This is a city defined by its past, but not in the way many Spanish Colonial cities are, with their historic role over centuries. Antigua became what it is because of the trembling of the Earth, the quakes that wrecked it so many times the Spanish finally gave up and moved.

Between 1586 and 1776, six earthquakes and three less severe tremors hit this valley. The one in 1717 was so bad that three–quarters of the nuns left the city's largest convent and relocated to towns in other areas. Many buildings were restored eventually, though for more than a century Antigua was almost a ghost town, its roofless buildings and plazas used to dry coffee beans from nearby farms in the sun. 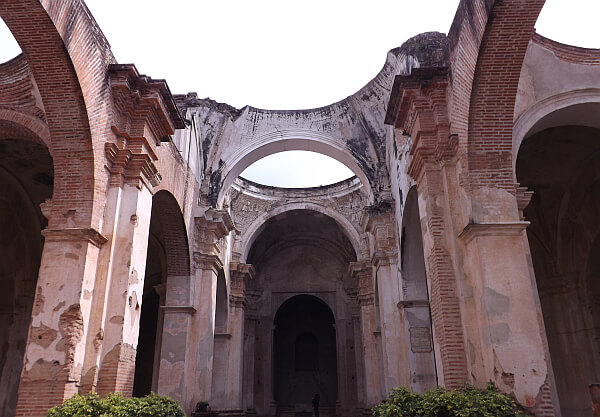 The churches—which seem far too numerous for a city even three times this one's size—did not fare so well. The majority of them from that period lie in ruins. Some are open to wander through, making for evocative photo backdrops, while others are permanently fenced off. The rectory behind what was the country's original cathedral, right off the main plaza, is a series of walls and arches open to the sky. La Merced, the colorful yellow church with carved grape vines in front, is an illustration of the rebuilding difficulties. Originally opened in 1547, it was rebuilt multiple times. Just a few years after a major reconstruction in 1767, it was pummeled by the earthquake of 1773. Rebuilt again, much of it came tumbling back down in 1855.

Despite the troubles, in the modern era this city has been Guatemala's main draw, much more accessible than the grand Mayan site of Tikal far to the north. Declared a UNESCO World Heritage site in 1979—in the midst of a civil war no less—it is a cosmopolitan mix of visitors these days. Merchants in full indigenous regalia shout to expats and foreign visitors from multiple continents. Lately more domestic tourists from the country's growing upper and middle classes have joined the mix in droves. In an illustration of how desirable this historic city has become, real estate in the historic center here is more expensive than in the most prestigious locations of the capital city.

This is a place where the museums and traditional sites are outweighed by the feel of just strolling around and taking it all in. Apart from a visit to the Cerro de la Cruz overlook spot above to get our bearings, we spend the whole time on foot among buildings whose first stones were laid in the 1500s and 1600s. We dine on hearty food in shaded courtyards, like at Posada de Don Rodrigo, where a marimba band plays across from the dining area, fountains gurgling during their breaks. At times it seems best to just join the locals on a bench in the main plaza, the original white–washed church and the volcanoes watching over us, one of the latter sending up smoke to remind us she's not ready to call it quits.