Interview with Nick Stanziano of SA Expeditions in Peru On a semi-regular basis we interview industry leaders operating in Latin America to get an insider's look at the travel industry and our part in it. Today we talk with Nick Stanziano, founder and chief explorer at SA Expeditions, based in Lima. With feet on the ground for a decade and plenty of local contacts, this company is doing more than just leading tourists around the main sites of Peru.

We'll get into your back story next, but tell us what sets SA Expeditions apart as a tour company and what kinds of trips you do beyond your adopted home country of Peru?

SA Expeditions focuses on private, tailor-made adventures to South America. This includes everything from cruises down the Amazon, ice hiking in Patagonia and island hopping in the Galapagos to name just a few. We're a 100% virtual team that conceptualizes our structure as a network of trip designers, local operators, guides, administrators, and locals inhabitants in our destination, which are all encapsulated under the "SA Expeditions Universe" or "#saexpeditionsuniverse" for those more socially inclined who want to get to know our team personally.

We don't pretend to be a 20th century luxury travel company with office space in the world's iconic cities. We pride ourselves on using new technology, local expertise, and an innovative business structure to execute high-touch, private experiences at a more affordable cost to other leading luxury travel brands operating in South America.

When I hiked the Inca Trail in 2005 there were organizations fighting to get better treatment and pay for porters, which I believe you were involved in. Tell us about your start in Peru.

I first came to Peru at the age of 24 years old, a few years after graduating from the University of California where I studied socio-economics and politics of Latin America. I bought a one-way ticket to Cusco, and quickly ended up in Ollantaytambo where I was affiliated with an organization working in porter rights for a brief stint of 4 months. While we had our hearts in the right direction, much of the hard work in porter rights was well under way and any further impact required a much longer commitment than what my volunteering allowed. This initial exposure to the Sacred Valley did make a significant impact on me though and was nothing short of a rebirth into adulthood that was now formed and shaped by the Andes. Since then, the future of my company, my family and my identity has been inextricably linked to Peru.

Many luxury hotels and tour companies talk about sustainability and social good, but don't do a whole lot beyond hiring workers and writing some checks for donations. What kind of work are you doing in the Sacred Valley to make a difference in remote communities?

Being a "sustainable" company is not something that happens from one day to the next. Like any meaningful change, it's an iterative process that has many stages and evolves over many years. For SA Expeditions, we began this process outside the Sacred Valley, developing community based treks to Choquechaca. We expend a lot of effort in creating demand for our Choquechaca trips and on building capacities within the families there to execute high-touch, exclusive experiences only for our clients. It's also important to understand that Cusco and the Sacred Valley are flooded with do-gooders, both public and private from all around the world, who spend millions of dollars a year assisting with development in the region. What Peru really needs is to focus on tourism that can help develop a much larger swath of the Andes, instead of conveniently focusing on the route from Cusco to Machu Picchu in which millions of tourists visit per year.

Therefore one important aspect of our company's activities over the next 10 years will be taking the lessons that we're learning in Choquechaca to build a model for high quality, inclusive, community based tourism that can be scaled up along other parts of the Andean range, specifically along the Qhapaq Nan (recently provided with UNESCO World Heritage status). We believe that the future of luxury travel will be a blend of comfort, exclusivity and impact, and there's no better laboratory to understand how that these three variables engage with one another than in the Sacred Valley over the last decade.

Obviously a lot of money has come into region between Cusco and Machu Picchu since tourism in Peru has exploded the past 15 years. Some of that is good, of course, but there are always unintended consequences. What kinds of negative changes have resulted from that and what is your company doing to try to counter some of the problems?

What is considered a negative result to one person is often seen as the exact opposite to someone else. For example, I think it's a tragedy what has happened in the town of Pisac in the Sacred Valley. What's presented on glossy brochures around the world as an Inca indigenous market is not that at all. What was once a beautiful colonial plaza, overlooked by one of the most spectacular Inca sites, has essentially become a trinket market covered with tarps, now gentrified to peddle Andean art and crafts geared towards empty nesters and hipsters. We no longer recommend the market in Pisac because of its implications in experience for our clients, but it's not our place to judge what's best for the families in Pisac. Some of them have significantly increased their quality of living because of the flood of tourism in the last 10 years.

On a national level, I believe the lowest hanging fruit in mitigating the negative effects of the financial windfall in tourism is rooting out corruption. The economic and political elite both in Cusco and Lima need to believe that their children will be better off when Peruvians of all stripes and colors are integrated into the economy under a fair system. For example, Peru's judicial system remains one of the most corrupt and ineffective judicial systems on the continent. When the Peruvian economic and political elite equate a nicer car, bigger house, and better education to improvements in the social indicators in the rural Andes where much of the country's population lives, true progress will be made. We hope to provide an example that fair and intelligent dealings with those at the bottom of the economic pyramid is more profitable than backroom deals that grease the pockets of those with influence.

What is the Choquechaca region and why have you focused on that area?

Choquechaca is a narrow valley that climbs perpendicularly up from the Patacancha valley, which connects perpendicularly to the Sacred Valley. The Sinchi family clan who are the inhabitants of Choquechaca are dear friends and their experience in adjusting to modernization is similar to hundreds of indigenous communities across the Vilcanota mountain range. It also has some of the most spectacular remaining native polylepsis forest in the entire region. It was a logistical place to begin our work in understanding how comfort, exclusivity, and social impact can work together to create an economically viable business model that benefits all the stake holders equally. Choquechaca is by no means a practice in charity and our friends and colleagues in Choquechaca work very hard to learn and grow alongside everyone else in the expanding SA Expeditions Universe. 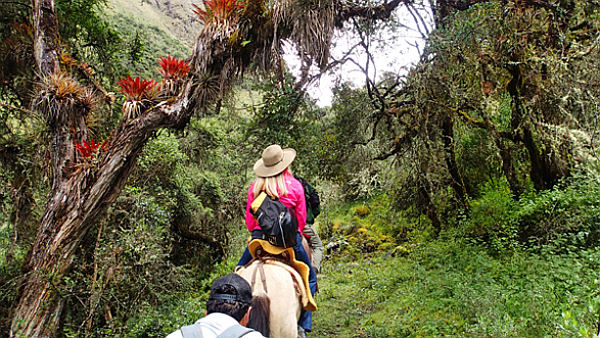 What mistakes do you see tourists making when they come to Peru and what actions could they be taking to better the lives of the Andean people?

Spend more. Question when something seems too cheap than it is. For example when considering price haggling, which can be sport in Peru, remember that 10 soles (3 dollars) makes much more of an impact to someone making $400 dollars a month vs $4,000 dollars a month. I firmly believe that capitalism and markets, when fair, can be a powerful source towards social good.