Most of the tourists arriving by Jumbo jets in Baja Sur never get beyond the Los Cabos region. A huge adventure playground awaits to the north, however, around Todos Santos, La Paz, Loreto, and beyond. 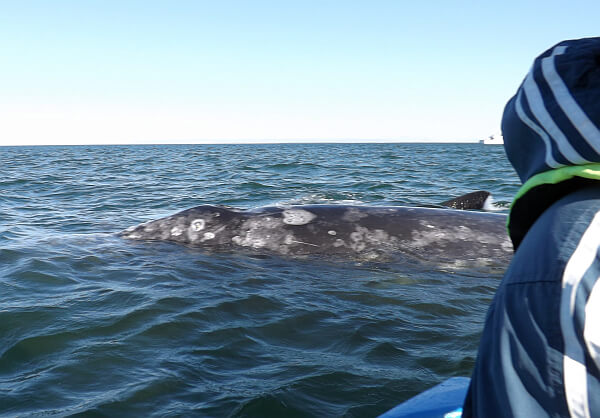 Our boat had barely glided to a stop when a huge grayish black mound emerged from the water nearby and spewed water from its blowhole. "Watch for baby!" shouts the boat driver. As if on cue, less than a minute later a baby gray whale pokes its nose up right next to me. I rub its head, carefully avoiding its big eye, as my boat companions squeal with delight and snap photos.

Sure, there are a lot of places you can go whale watching, but this is a real whale encounter. On a tour of the Baja Sur state of Mexico, highlights keep getting piled on top of highlights.

Our tour had started with whales soon after landing at the airport. Humpbacks breach beside us at sunset on a one–night sail on the Uncruise Endeavor ship. In the morning we arrive in the adventure playground of La Paz, on the Sea of Cortez. It would be easy to spend a week or two in this port city doing a different excursion every day, but we pack three of the best into one glorious day. 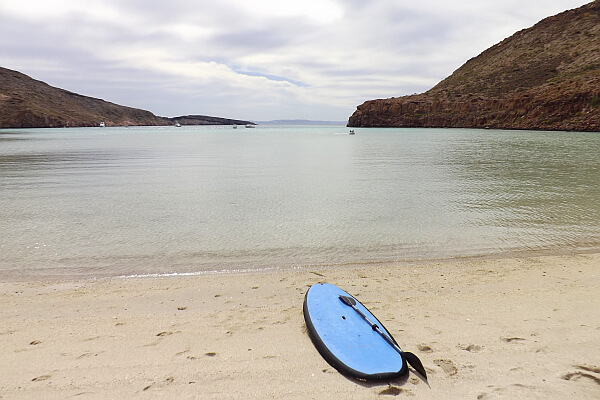 First we take a motorboat to an empty beach on Espiritu Santos Island, a protected nature reserve. After a short demo session we get into kayaks with Baja Outdoor Activities (BOA) and set off sea kayaking along the coast. As ospreys fly by with fish in their talons and other sea birds dive into the water with a splash, we paddle past dramatic cliffs and go single file through a rock arch. After two hours, just as our arms are starting to get sore, we enter a gorgeous bay with another beach that's empty except for a few people: a crew frying fish and making ceviche. There's an unbeatable view as we dine on nachos and seafood. 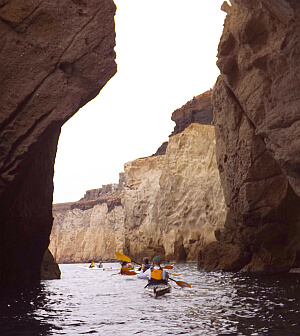 On motorboats again, we venture to an islet that provides a rare experience: swimming with sea lions. While you can also do this in the Galapagos Islands, in most parts of the world this is not a safe activity: the sea lions are too aggressive and don't take kindly to these pale creatures with glass masks invading their territory. Here the alpha males stay on shore looking like Genghis Khan lording over a harem, while the females and pups swim around in the waters nearby. The young ones are especially playful, sometimes swimming through our legs or coming face to face with one of us in the water before peeling off and shooting in another direction quickly.

In any normal destination, stacking these two experiences on top of one another would make for a day to remember for life. We've got one more thrill in store, however. We're going to swim with another batch of creatures: the world's largest fish.

Eye to Eye With Whale Sharks

The mysterious whale sharks migrate long distances across oceans and settle in only a few places in the world for a few months at a time. One of the most accessible is just off the coast of La Paz, close enough that you can see the buildings along the malecon when you pop your head above the water. (There's also an abandoned hotel project within swimming distance, a lasting testament to poor planning on land that should never have been developed.)

Before we get off the boat, we pop on fins and masks and start getting giddy with excitement when we see one of the sharks swim past us, just under the surface. There's a mix of anticipation and fear, but the guide from Fun Baja assures us that there's nothing to worry about. Unlike their sharp-toothed cousins, these sharks aren't meat eaters. Their wide mouths suck in sea water and process the plankton. This area is apparently rich in it, so it's like a free range buffet table.

Suddenly the guide shouts, "Follow me and swim quickly!" We jump in and swim as fast as we can behind him until I almost run into a ship-length fish with eerie white spots on the side. I swim quickly to the left to avoid his swishing tail and then try to catch up as he glides along in the water without all the effort that we require. We make our way behind the guide to a smaller one and for a few seconds I'm swimming along eye to eye with her. Some of the others in my group have underwater cameras and poles they're messing with as we go, but I enjoy the unencumbered experience of swimming next to the head of this giant fish, nothing between us except my snorkeling mask, my arms flat against the side of my body.

We get treated to a glorious sunset as we motor across the water to the La Paz Marina and dock walking distance to the best hotel in town: Costa Baja Resort. We base ourselves here a couple nights, spending a day in the funky town of Todos Santos on the other side of the peninsula. A new highway has gone in recently connecting Los Cabos, Todos Santos, and La Paz, so now it's very easy for someone to land at the busiest international airport in the region and be in one of the other two places within a couple hours.

Todos Santos Adventures splits us into two groups, for surfing lessons or mountain biking. I go the sweaty adventure route, cycling up steep switchbacks to get to a panoramic view of this oasis city that restocked the traders and pirates who sailed past centuries ago. We take off and pedal through the giant cacti, butterflies all around, and try to avoid skidding out on gravel in the sharp turns. I'm here in April, but it's already blazing hot and it feels like we're sweating out a gallon of water. This mountain biking course sits mostly unused in the summer months. As soon as the sun comes up the thermometer will start ticking up toward 100F degrees. 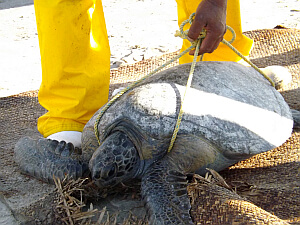 Sleeping Near the Sea Turtles

The morning is surprisingly cool as we hit the road the next day, however, and head northwest toward Magdelena Bay. Our next stop is the camp of one of Mexico's best-run sustainable tourism organizations, RED Travel. Travelers don't book with them for a faux-camping experience like you get in an upscale African "tent" camp. Instead we're truly one with nature here, leaving as little impact on the land as possible and sleeping right where the organization's turtle tagging and tracking program takes place. RED Travel is the tourism part of a major project that has turned former poachers into turtle protectors. Fisherman who used to sell the turtles for meat are instead now getting paid to participate in research by tagging and tracking captured turtles, immediately releasing them so they can continue their normal migration patterns. With five of the world's seven species of sea turtles spending part of their lives on the coasts of Mexico, the work this group does is a vital step in sustaining those populations.