Paddling from beach to beach offers unsurpassed access to the most beautiful parts of the Sea of Cortez. 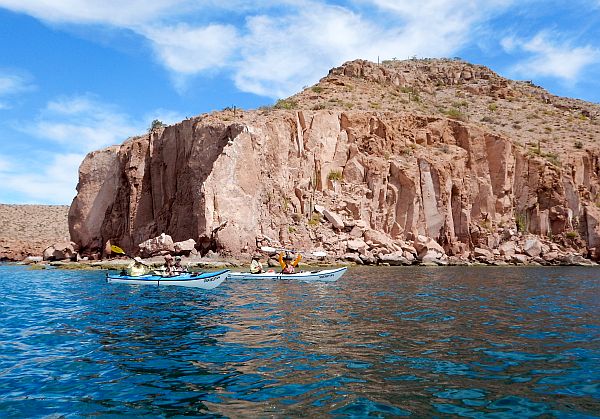 Jacques Cousteau called the Sea of Cortez off Baja California Sur "the world's aquarium." Home to over a third of our planet's marine mammal and cetacean species, its crystalline waters are filled with migrating whales, dolphins, sea turtles and all manner of colorful tropical fish. Blue-footed Boobies, Great Blue Herons, and Yellow-footed Gulls soar overhead. At night, a nocturnal ring-tailed cat called a babisuri patrols its rugged desert islands.

Rich in sea life and blessed with sunny weather and warm waters, the Sea of Cortez is a kayaker's and snorkeler's paradise, as I discover on a new sea kayaking and glamping adventure offered by Todos Santos Eco Adventures (TOSEA), the leading eco-adventure company in Baja California Sur. Called Camp Colossus, it is a migratory immersion into a starkly beautiful region of striated pink ocher desert islands surrounded by turquoise waters that UNESCO has designated a World Heritage Site. 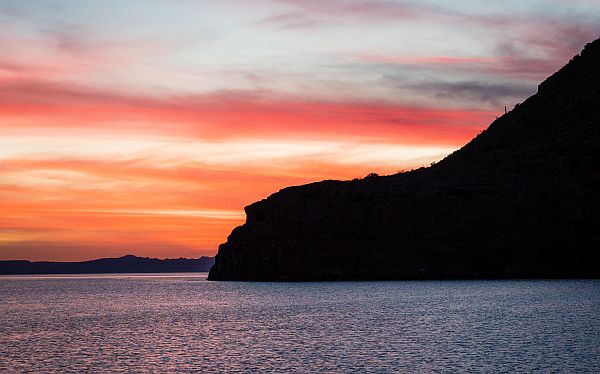 Over six days and five nights, small groups of kayakers paddle the length of Isla Espiritu Santo, the island in the heart of the protected marine reserve, making camp at pristine beaches along the way. Additional activities include snorkeling with friendly sea lions amid colorful reefs, hiking the island's volcanic trails, bird watching, and star gazing at night. The beach camps feature large, walk-in tents with comfortable cots and sleeping bags. Camp chefs serve gourmet quality food, including fresh catches purchased directly off the boats of local fisherman. Camp Colossus truly promises the best of both worlds—exclusive access to some of the world's most stunning sea kayaking destinations with plenty of creature comforts. 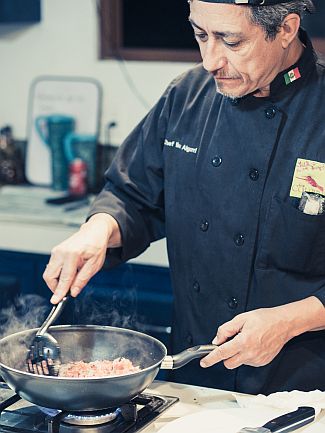 TOSEA founders Bryan and Sergio JÃ¡uregui have been sharing their passion for the phenomenal natural beauty, creative culture, and extraordinary wildlife of Baja California Sur since 2002. Sergio leads their team of certified wilderness guides and biologists, while Bryan handles trip logistics. She also manages their charming bed and breakfast called Los Colibris Casitas, located near the resort town of Todos Santos, ninety minutes north of Los Cabos. Perched on a hill between a freshwater estuary and palm grove and the Sierra de la Laguna mountains, Los Colibris Casitas offers unsurpassed views of the Pacific from its eight spacious villas. Early in the morning you can watch fishermen launch their pangas into the roaring surf, and at sunset see the western sky erupt in streaks of fiery orange and red.

I arrive at Los Colibris in time for an introductory gourmet cooking class taught by legendary Todos Santos chef Iker Algorri, author of Cooking Adventures in Baja California Sur. Born in Bilboa, Spain, Iker is a former Mexican government federal litigator who gave up practicing law to pursue his lifelong passion for Bajan cuisine. "You transmit your energy into the food you prepare," he explains while demonstrating how to perfectly fry fresh tortilla chips and chopped tomatoes and cilantro with guacamole. Iker says he sources all of his ingredients from local organic farms and a fishing cooperative, buying the fresh catch of the day off the morning pangas. The results, like poblano peppers stuffed with fresh-caught tuna we prepare for our main course, are delicious. 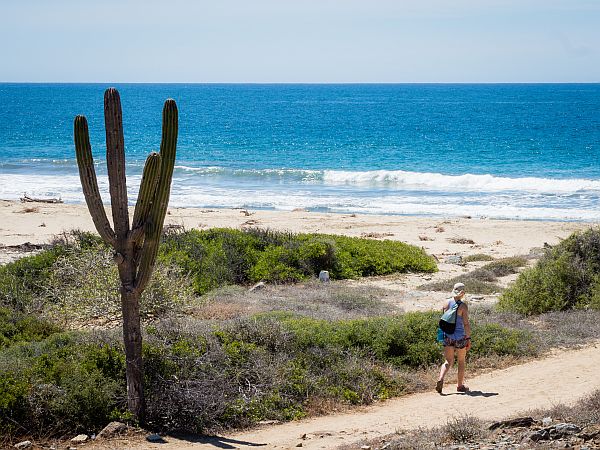 The next morning, Sergio and his senior guide, a former biologist named Bernardo Cruz Monfort, lead our small group on a hike in the hills above a bay called Punto Lobos, situated about two miles from Los Colibris. Stopping to take in the vista overlooking a cove called Baja Vejo, Sergio explains that it once served as a port for ships sailing up from Panama bound for the California Gold Rush of the 1840s. After continuing to hike along cliffs and descending to a long curving beach, we enjoy a fantastic picnic lunch prepared by Iker and his team. Then we're off to Los Cerritos beach for an afternoon of surfing lessons at one of the best places in Mexico to learn how to stay upright while riding the waves. A perfect first day ends with dinner out in Todos Santos, an artsy resort town offering a funky mix of restaurants, bars, art galleries, and New Age spiritualism. 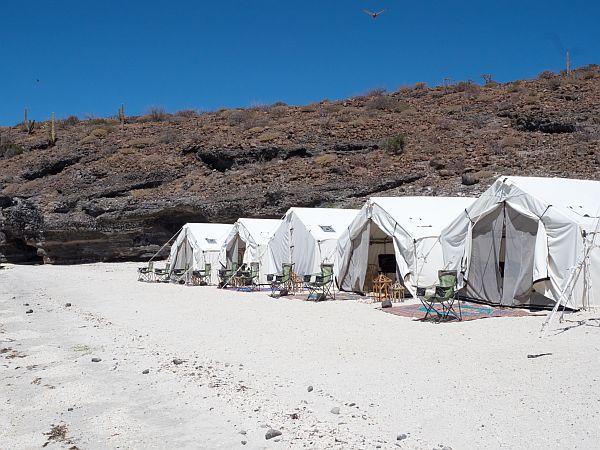 The next morning, we set off for Camp Colossus, first crossing the Baja California Sur peninsula by van to the historic port town of La Paz, where we pick up our wetsuits and snorkeling gear. We then board a boat owned by Captain Juan, the seasoned skipper Sergio has hired to transport us to Isla Espiritu Santos and neighboring Isla Partida, separated by a narrow channel, the site of our first camp. Renowned for their lava rock formations, deserted white sand beaches, giant cacti clinging to pink cliffs and ancient rock art, these still pristine, largely uninhabited islands form part of a protected national marine reserve within the UNESCO Heritage Site. TOSEO has secured exclusive rights to camp on several of their beaches. 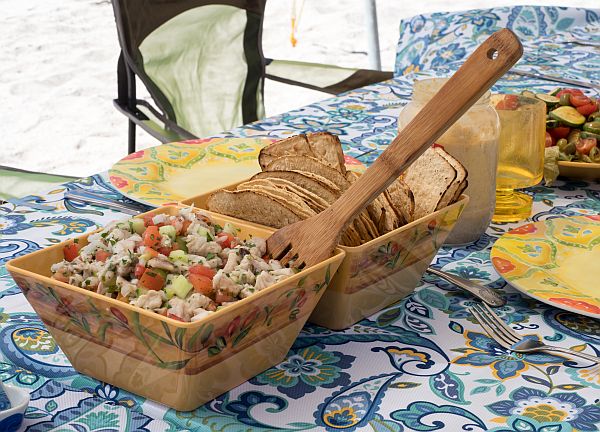 About an hour after departing from La Paz, Captain Juan deposits us on a beach called Ensenada Grande. This perfect arc of sugary white sand facing a shallow bay was voted Mexico's most beautiful beach by one travel magazine. Several TOSEA support staff are waiting to greet us and show us to the two Colossus tents. Camp also includes a spacious shaded dining area and a discreetly placed compost toilet cabaña. The camp chef, a gifted young Italian named Ivan—who bears an uncanny resemblance to Justin Timberlake—has prepared a delicious lunch of tuna ceviche with fresh tomato salad slathered in fiery homemade mayonnaise.