Putting technology aside and concentrating on nature instead, a small ship cruise plying the waters next to the Baja Peninsula can be a perfect mix of pampering and adventure on sea and on land. 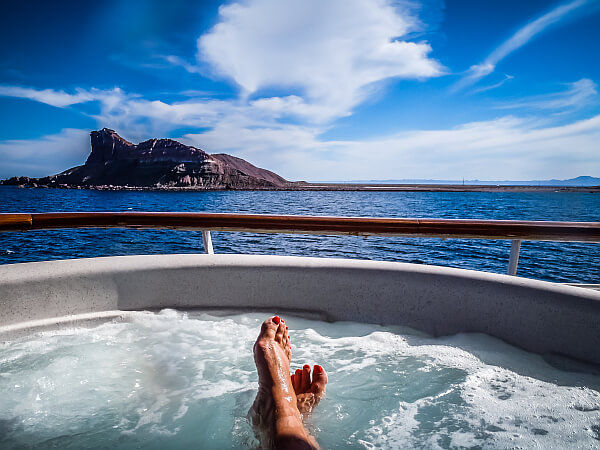 In a world of 24-hour connectivity, time away from the technological tethers and stress of everyday life is the rarest and most precious of modern indulgences. No phone calls. No Facebook. No tweets. No texts. Nada.

And if there is a place best suited to a week of total disconnect, it is Baja's isolated Sea of Cortez (also known as the Gulf of California, and the Mar de Cort’s in Spanish). This is the wild and bountiful marine world separating mainland Mexico and the Baja California peninsula. 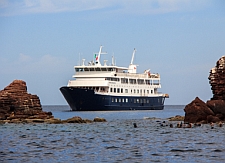 I set sail in late March for a seven night Sea of Cort’s small ship voyage with UnCruise Adventures: A vacation where time was measured in experiences, virtual friends were replaced with real ones, and the habits of whales and dolphins and sea lions determined the itinerary. It was a week of downtime and playtime — kayaks, stand up paddle boards, hot tubs and rope swings. Then sunset cocktails, gourmet meals, and casual elegance without a dinner jacket or evening gown in sight.

Officially, this was my first UnCruise. And first time aboard the 86-passenger Safari Endeavour. But in reality, my husband and I had first sailed with the company, operating then as American Safari Cruises, and later as InnerSea Discoveries, in Alaska’s Inside Passage in 1999, with many return voyages in both Alaska and Baja since.

While the name may have changed, the all-inclusive ease, attentive service, remote access and unforgettable experience has not. We’re not alone as repeat passengers. On each sailing we meet solo travelers, couples, and families on their third, fourth, fifth voyage already plotting course for their next adventure.

It’s addictive, this UnCruising: The active immersion into the natural world. The pampering. The convivial ambiance. The crew that gets as excited about wildlife sighting as the passengers. The blissful feeling of isolation where the ’real world’ seems like a distant planet. But it’s the wild and natural setting that keeps me coming back, as much as the onboard comforts and amenities. Baja’s vivid colors, its raw and rugged beauty and desert landscape perched at the edge of an emerald sea is as alluring as it is unique.

Baja in the Steps of Steinbeck

I hadn’t realized when I booked the trip that our March 23rd departure coincided to the very day with the La Paz departure of John Steinbeck some seventy three years earlier. In his classic book, The Log from the Sea of Cortez, Steinbeck chronicles a six week expedition with his friend Ed Ricketts, the boozy, good-hearted marine biologist and real life version of the character, ’Doc,’ in Cannery Row and other Steinbeck novels.

’The sea was calm and very blue, almost black-blue as we turned northward along the coast,’ reads the log entry for March 23, 1940. "It was good to be under way..." 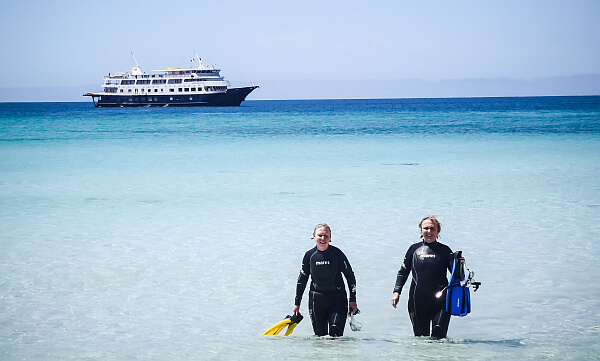 It was indeed good to be under way, carving out a frothy white wake beneath a benevolent sun in the same black–blue sea with the thrill and wonder of an adventure before us. And while the white linen and glistening brass conditions aboard the 232–foot Safari Endeavour couldn't have been more unlike the cramped and rustic accommodations of the Western Flyer, the 75–foot fishing boat that transported Steinbeck and Ricketts, the similarities that spanned the decades were uncanny.

Reading the diary entries each morning, it was apparent that the years hadn't altered the beaches and bays and islands we explored. And that the same spirit of discovery that had brought Steinbeck and Ricketts to this nature-rich region was also at the heart of our expedition.

We'd barely cleared the La Paz channel when Julia, an 11-year old girl traveling with her grandparents, exclaimed, "Look! Dolphins!" Sure enough, riding our bow was a lively pod of common dolphins, the first of many that would join us periodically throughout the cruise to tag along on the adventure.

Whale sightings also drew a crowd to the bow where binoculars and cameras searched and clicked; vacationers turned paparazzi with the gigantic mammals cast in the role of elusive celebrities.

The Sea of Cortez plays host to nearly every species of whale on the planet: ’sperm whales, fin whales, killer whales, California gray whales, and the world's largest animal, the blue whale.’On one afternoon a humpback, embedded within a frenzy of feeding dolphins, loitered near the ship well after the pod had moved on, keeping us mesmerized every time it came up to breathe or gave us a flash of its massive tail on its way back down.

And if we weren't on deck when wildlife appeared, flat screen televisions mounted in public areas throughout the ship and passenger staterooms, broadcast real–time video from the ship's bow-mounted video camera. One night, I emerged from the shower to see bow–riding dolphins trailing neon green phosphorescent wakes across the screen. Nice.