Mexico's most promising emerging wine region is in the same state as two UNESCO World Heritage historic cities and the facilities are surprisingly upscale for tastings or overnight stays. 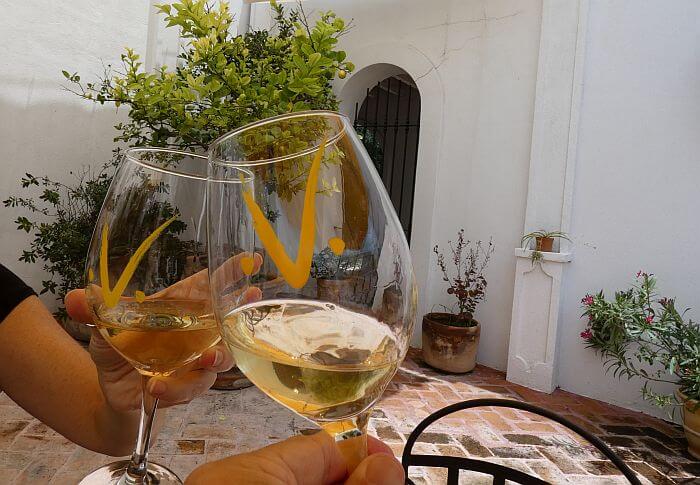 While the Valle de Guadalupe around Ensenada in Baja gets most of the attention in Mexico, it's not the country's only wine region. Just as there's more U.S. wine to taste than what comes out of Napa Valley, the southern neighbor produces wine in a lot of different regions. The Mexican wines of the Bajio highlands of central Mexico deserve a look, especially if you're staying in nearby San Miguel de Allende.

The central highlands of Mexico actually have the longest vineyard history in North America. While there was surely some home-made hooch here and there elsewhere in the 1500s, Casa Madero of Coahuila state seems to be the earliest winery on record that produced in bulk and sold its production commercially. It initially launched to serve a Catholic mission there and dates back to 1597, still around now as Casa Madero. The mission initially made wine from local grapes found in the area, growing at 1,500 meters in altitude.

The wineries of Guanajuato state are situated a few hundred meters higher, with pleasantly warm days most of the year and only a couple months that have cool weather at night. The wine-making tradition doesn't have much of a history in this corner of the Bajio region, but that's not stopping the forward-looking owners and vintners from making up for lost time. They're investing heavily and experimenting frequently to be able to compete on an international level.

Two of us set off to get a feel for the local wine scene, first from a base in San Miguel de Allende then by staying at the impressive Tres Raices ("three roots") with its luxury hotel on site. The ride from the center of San Miguel to any of these wineries runs just 15 to 45 minutes, so you can easily hit two in one afternoon and be back by dinner. 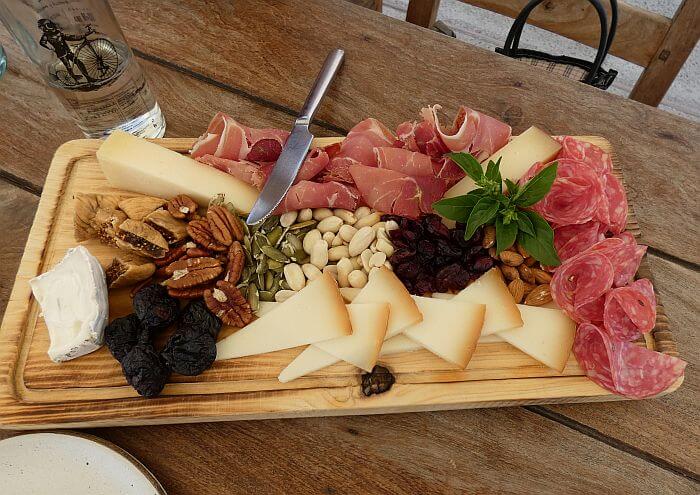 The experience in this area is a bit different than the norm, however. First of all, you need reservations and on some days it will be a private tour since these wineries are not well-known. For those used to the free wine tastings experienced in much of the world, or a modest tasting fee that is credited back to the purchase, the Bajio region set-up is going to feel rather expensive and elaborate. Tasting fees run the equivalent of $15 to $35 for three to five samples and a tour. The tastings in this region are meant to be more of a pairing showcase though: at a minimum there will be some cheese, olives, and sausages. At the higher end you receive a generous charcuterie platter that has dried fruit and nuts along with the cured meats and cheeses. It's meant to be an experience for your senses more than a quick in-and-out to see what's worth buying. There's no sales pressure at the end or even an e-mail list sign-up request.

Our first winery visit was just a short hop from the city center of San Miguel de Allende. Less than 20 minutes after the Hotel Matilda valet brought our rental car around, we were walking past a mix of grapevines and cacti—both bulging with ripe fruit—and touring the facilities at Dos Buhos. 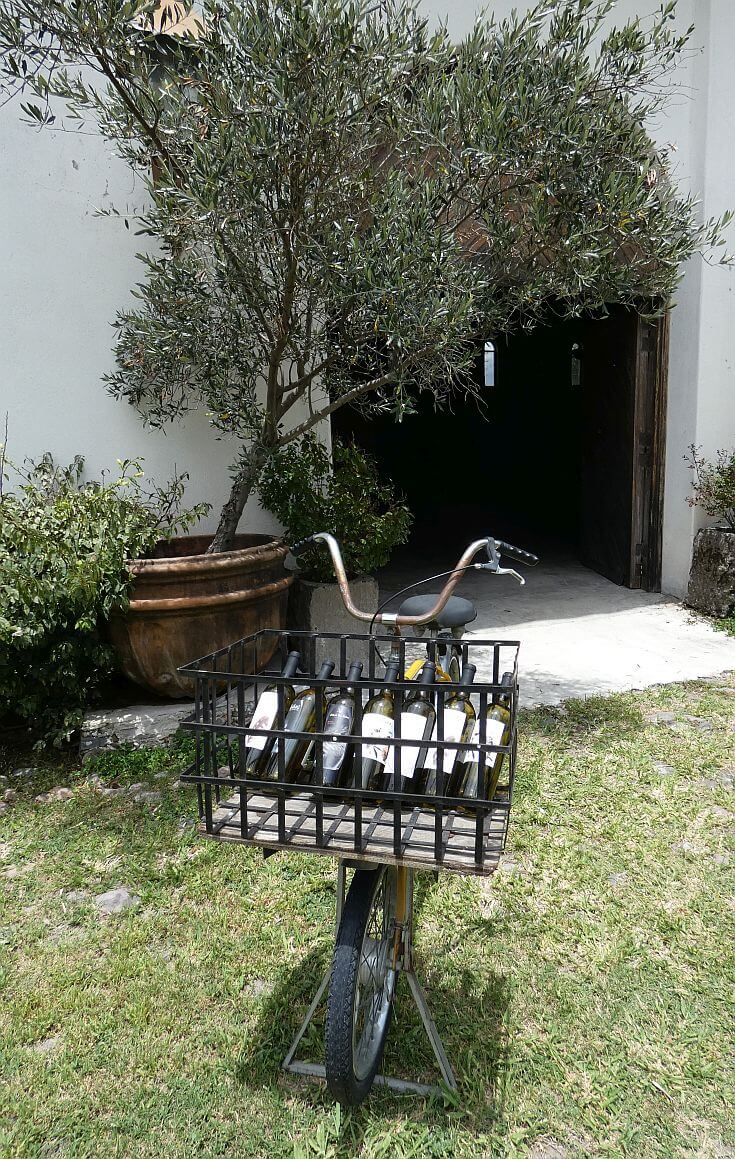 The Dos Buhos ("two owls") winery had its first harvest in 2012, with grapes coming from four different local vineyards they own. One adjoins the whitewashed hacienda-style buildings, where a big function hall features columns and art pieces made from the relics of a nearby train station. They produce certified organic wine in a deliberate, traditional manner here, with limited production runs. "We make 18 to 20 barrels at a time," explained production manager Pamela Lopez, "all by hand." August harvest time was just kicking in while we were there, meaning stacks of grape bins ready for the old-school crusher.

After touring the barrel room, fermentation tanks, and a non-consecrated wedding chapel, we entered the tasting area. It's a lovely courtyard area with a fountain in the middle, though if things get busy they set up under a big shady tree just outside the building. They were also working on a picnic promotion where visitors can buy wine on site to enjoy with some food they brought or they could order a boxed meal, spreading out on a blanket in the countryside, keeping a safe distance.

My organic wine tastings have been more miss than hit over the years in multiple countries and when I first tried something from Dos Buhos two years ago at a festival it didn't change my mind. They've made great strides since though and the tasting experience was enjoyable throughout. It started out with a delicious Sauvignon Blanc that was a great match for the pepper and mango jam we had on our platter with some bread. Figs and one of the three cheeses accompanied a 2017 Tempranillo, then we had a more tannic and serious Special Selection even blend of Agliánico, Cabernet Franc, and Cabernet Sauvignon. This one is aged 22 months in second-use French oak barrels and presents a variety of flavors moving across the taste buds. We finished up with a unique Vin d'Oranges Amères before buying a white wine bottle and that jam for later and heading to the next stop. 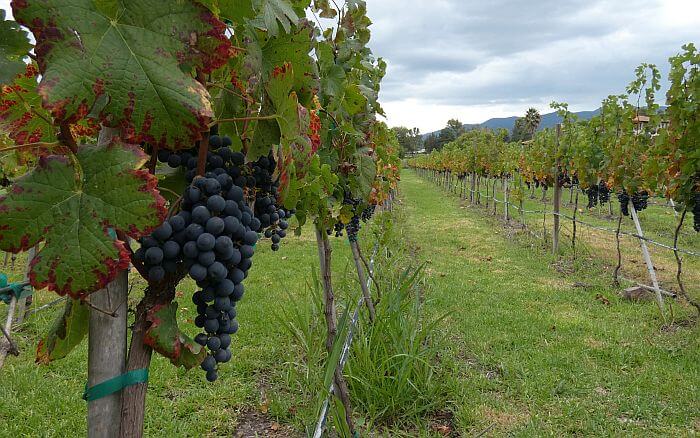 See more on Dos Buhos at their website, where you can delight in some of the most beautiful bottle labels in Mexico.

It didn't take long to get from Dos Buhos to San Lucas winery on the highway to Queretaro. As the crow flies it would take less then a minute. We moved from a family farmhouse feel to a land of old money and polo though, even though this development is only a few years old. Passing vines, olive trees, and lavender fields next to stone buildings that look deceptively historic, we arrived for our second tour and tasting of the afternoon.

I was supposed to meet with the 30-something Argentine winemaker Mailén Obon while I was there to get her story, but then a text message arrived saying, "We have a big problem with the olive oil machine at another property and I have to go fix it." 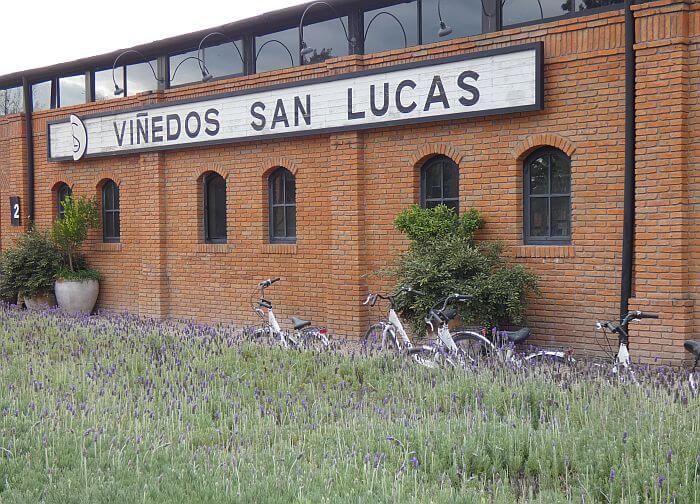 I caught up with her later to ask about her background, which is certainly varied. "I studied wine making in Argentina and worked in the industry while I was going to school. Then I worked in Ukraine and in California, getting involved in all the wine processes. I went to Mexico on holidays and just by chance an opportunity came up for making wine here. Everything happened very fast and three weeks later I was living in San Miguel de Allende."

This Bajio region is still finding its footing in terms of which wine grapes are really going to perform over decades. Some wine experts say the white wine and rosé options are the best fit for the high-altitude climate. Since red wine outsells white by a wide margin though in Mexico, red wine grapes end up getting more of the acreage. Perhaps because of her Argentine background, Mailén is doing better than most with Malbec, though she says the Pinot Noir grapes are looking promising at San Lucas. Her favorite though is the Merlot reserve, "which pairs perfectly with pistachio crusted salmon."

The one I ended up buying from our tasting at San Lucas was a red fruit-forward Crianza, which is a blend of Malbec, Cabernet Sauvignon, and Syrah, aged six months in American oak barrels. While some of the bottles lining the walls in the tasting room are from the young grapes grown on site, everything you can taste and buy comes from a vineyard closer to Dolores Hidalgo: La Santisima Trinidad. The company behind both of them also owns Viñedos San Francisco that adjoins San Lucas, all open to visitors and set up with lodging. 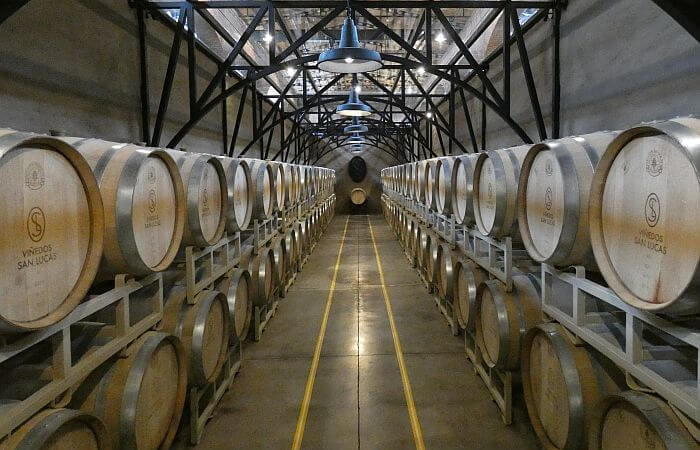 The commercial selections are still rather limited at this early stage in their growth, but we also tried an intense, peppery Cabernet reserve that spends a year in the barrel then another year in bottles. The white blend here is juicy and fun, with a variety of tropical fruit, honey, and peaches on the nose. Mailén has plenty of room to experiment with what's growing at the three wineries and she's continually testing different combinations to find a happy surprise. "Right now I'm trying a sparkling wine of Pinot Noir and Malbec, a Tempranillo Blanc de Noir, a Tempranillo Rose, and a Caladoc Rose."

San Lucas is also a real estate development, with stately stone houses amidst the vineyards. Plus there's a hotel you can stay in overnight here so you can dine in the restaurant, bring a bottle back to your room, and forget driving anywhere. See more at the official website.

We returned to San Miguel de Allende after these two visits, then got a good night's sleep to get ready for three stops the next day.