Our second day of winery visits near San Miguel de Allende brought a major contrast between big dreams and big money, between a family affair and corporate productions. We visited Bernat Vinicola first, a one-building facility with a hand press where workers clean grapes under the shade of a tree. The founder Alvaro and winemaker also named Alvaro took turns showing us around, the latter Alvaro's cute daughter tagging along. Later in the day we transitioned to Cuna de Tierra and Tres Raices. Neither of those grand facilities would be out of place in Napa Valley. 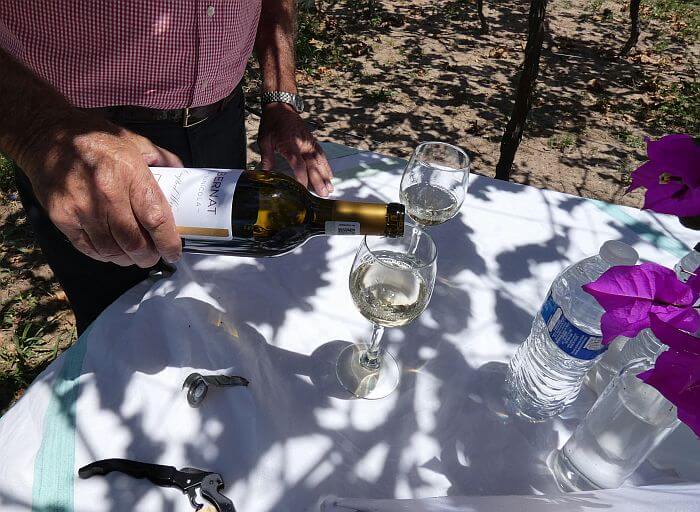 At Bernat, Alvaro the owner led us to a table set up under a shady pergola of fat grapes meant for eating. We picked a few ripe ones to sample and he gave us a quick history of wine from the BC age to today while preparing and pouring. We enjoyed a nice white blend of Viognier and Chardonnay that had more minerals in the mix then most whites I've tried from the region.

He bought this 25-acre estate that sits between 1,850 and 1,885 meters 12 years ago after a divorce and a desire for a clean slate. He owned a fruit orchard in the past but dove headlong into learning about the wine making process, in person in Ensenada and online through the University of California system. He looked for a good location in multiple Mexican states and ended up settling here, just outside of Dolores Hidalgo.

After touring the production facility and tasting some wine straight out of two fermentation and storage tanks, we went up to the roof terrace for some wine and local cheese. There we got to try a well-rounded Grenache and a longer-aged blend of Syrah, Malbec, and Merlot. "The grape probably grown the most in this region is Cabernet Sauvignon," Arturo explained, "but that's because of popularity more than suitability. We used to grow Sauvignon Blanc but it didn't do very well. Viognier, Muscat, and Chardonnay are a more natural match; the Viognier is the prime one in our white wine." 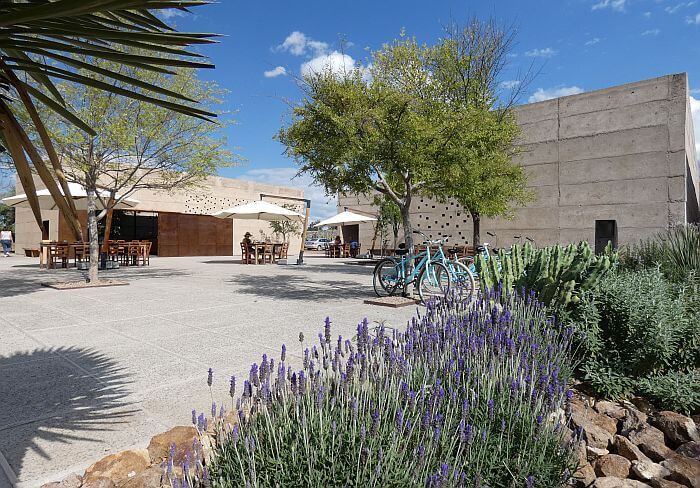 The wines of Cuna de Tierra (“cradle of the earth”) are probably the best-known from this region right now, with a longer pedigree and a well-honed marketing machine. The company also sells eating grapes, olive oil, and lavender to stay diversified and they've been active on this plot of land north of Dolores Hidalgo since the early ‘90s, bottling wine since 2005. They have an office right off the main square in San Miguel de Allende where you can buy a bottle or set up a tasting.

Around 42 hectares (104 acres) of the growing land here are devoted to 12 kinds of wine grapes. There's a modernist, bare-concrete building complex housing the service and production areas, then an observation tower in the vines for getting a good overview or having a small party. 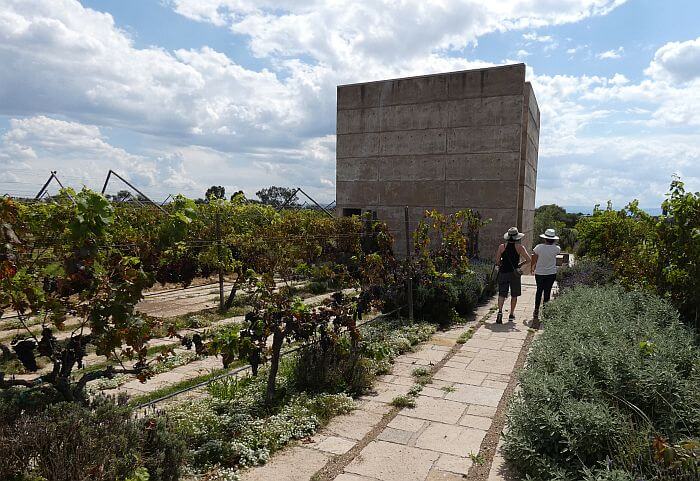 After a short tour in English of the vineyard and storage facilities, we sat outside for a premium tasting: four wines and a platter of food that put off any thoughts about stopping for a late lunch. This was the priciest tasting of our trip, at nearly $80 for two, but we got a good wine sampling and plenty of pairing options to experiment with.

We started out with a 2018 white wine that was a blend of Semillon and Sauvignon Blanc. This bracing and refreshing start paired well with the dried apricots and nuts.

Next up was one of their signature wines that I've seen a few times in stores: Nebbiolo. The Nebbiolo grape comprises 80% of this blend, with the rest being Malbec and Tempranillo. This 2018 version is a nice easy drinking wine on its own, but it does get 12 months in new French oak barrels, so it has enough heft to pair with the right dinner items or, in our case, some of the local Mexican cheeses.

The Pago de Vega was a more serious wine, with 14-18 months in new oak barrels plus some aging time in the bottle before being released. A blend of Cabernet Sauvignon, Syrah, Merlot, and Cabernet Franc, it's a balanced and complex wine that stood up to the flavorful prosciutto and goat cheese on our plate.

We finished up with the dessert wine Llora de Tierra Mistela. It didn't taste quite like anything else I've had, with the main grape being Muscat but the others being kind of a mystery: the blend is from a variety of grapes and years, which may include some extra sweet ones from the edible aisle that normally don't make their way into wine. The blend is aged for five years in barrels though and it definitely has a lot going on in the glass. 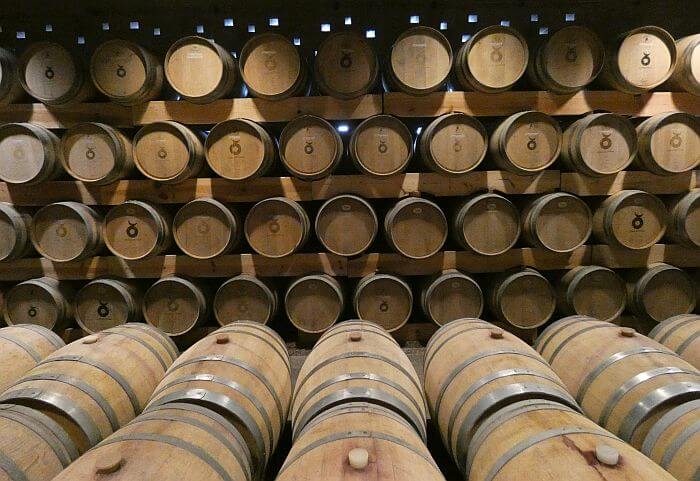 If you'd rather order full glasses of wine with a meal than do the tasting, there's a highly regarded restaurant here that was putting out some beautiful plates during our visit, with some greens coming from their own garden. Cuna de Tierra is a big operation, producing 90,000 bottles annually and exporting to Europe and Asia, but you still need reservations for a tour and tasting to get through the manned gate. For more information see the Cuna de Tierra website here.

Our last stop was where we were booked to stay for two nights: Tres Raices. Located on the main road between San Miguel de Allende and Dolores Hidalgo, it's easy to find, popular, and quite impressive. The out-of-state family that founded Tres Raices obviously had deep pockets to work with. The imposing architecture (with motifs honoring the famous ceramic tiles from Dolores Hidalgo) makes a grand statement. There are so many acres of vineyards here that we rode through them for a half hour on bicycles. 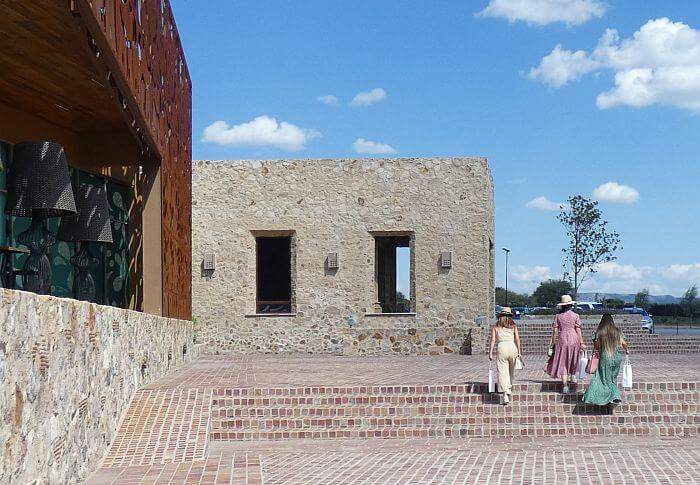 This is another winery with a 30-something female alchemist heading up the operations: Alejandra Cordero from Chihuahua. Her job is going to get bigger each year too: the cellar holding the wine for aging here is set up for a potential 2,000 barrels at a time. The oldest vines here are only from 2015 though, with the winery opening up to the public in 2018. So all the wines produced at Tres Raices are from grapes grown elsewhere for now, in states like Aguas Calientes and Chihuahua. It will be interesting to see what happens to the wines themselves in a few years when the grapes harvested locally start to make it into the blends.

For now, the output is a bit of a mixed bag. Their Tempranillo was my favorite red wine of the whole trip and I also enjoyed the Ensemble red blend of 80% Cabernet Sauvignon and 20% Syrah. They've already won a few awards from competitions in Mexico and Spain. Sauvignon Blanc lovers will really enjoy the one here though: it's got the classic grassy, green pepper notes you would find in a quality offering from New Zealand and has a lot of complexity for a white wine of such limited history. They have one version fermented in oak barrels and another that spends nine months in them.

The winery offers several tasting and tour options and if you come here on a weekday, you'll have the large tasting room mostly to yourself. Take in the ceiling of cut barrels and admire the scenery outside as you leisurely sample the wines on offer. On weekends and holidays it's a different story though as day-trippers come in from feeder cities such as Leon and Queretaro—or from a weekend wedding in San Miguel. Our English-speaking tour leader and server, who had previously worked in the Valle de Guadalupe wine region, set herself apart from the ones we had interacted with previously though. She got to know our preferences before starting to pour, letting us try a good variety with the now-familiar platter of edibles. 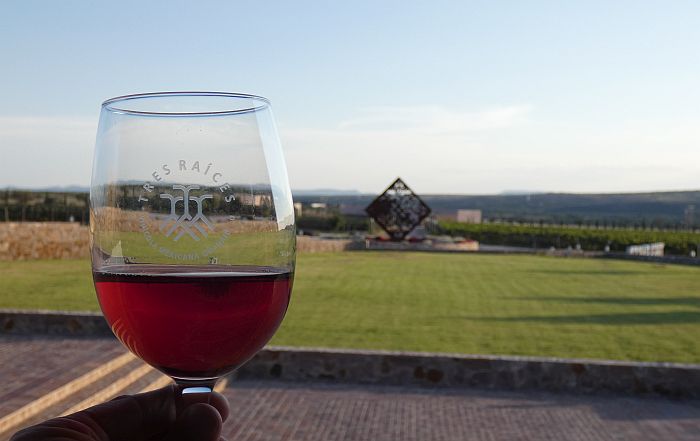 Tres Raices also has an excellent roomy restaurant called Terruño on site next to the tasting area and it's worth spending some time here pairing their wines with some good food. There's a nice blend of well-prepared items for all tastes, from pork belly tacos to grilled octopus to risotto, accompanied by attractive salads and desserts. We had a lovely sunset on the deck while sipping good wine and taking our time enjoying a symphony of flavors.

The bungalows at Tres Raices Hotel are situated among the grapevines, a good walk or golf cart ride away from the main vineyard building with all the public facilities. This is an excellent choice for a socially distanced getaway since each bungalow is a separate building. I think we had the quietest night's sleep here that we've ever had in noisy Mexico. Sitting on your terrace or by the pool at the end of the day is lovely with the sun setting over the nearby mountains. It's hard to believe you're only about a half hour from the historic center of San Miguel.

See our detailed review of Tres Raices Hotel or a video tour, then check out their website here for reservation information.

All the wineries profiled in this article can be reached on a day trip from your hotel in San Miguel de Allende or Guanajuato city, but you'll be less rushed if you can stay on site at one of them. San Lucas, La Santisima Trinidad, and Tres Raices all have hotels. If visiting San Miguel, pick up a Rutas del Vino map in the tourism office to see more on these and other wineries in the region, including opening hours.