A beachfront resort with 64 designer suites, a fantastic Mayan-influenced spa set in the jungle, and a signature restaurant with a menu created by a Michelin-starred chef. Be Tulum Hotel is at the wilder, more remote end of Tulum beach, close to Sian Ka'an Biosphere Reserve.

The problem with any "magical" tourist destination is that once the secret is out, the magic can sometimes fade. Tulum is famous not only for the Mayan ruins on the coast but also as an escape for the rich and famous, and, more recently, for the Instagrammer set. The long and beautiful white sand beach still remains, but since the 1970s, Tulum has steadily become increasingly developed (many might say over-developed), with the main road along the beachfront now filled with boutique hotels, high-end restaurants, and shops. Prices have risen almost as steeply as the tourist numbers.

New places are opening all the time, which makes Be Tulum, which opened 10 years ago, something of a Tulum hotel veteran and one of the town's best-known hotels. Originally offering 20 rooms in a jungle setting, Be Tulum has, like Tulum itself, expanded and grown; the resort now has 64 designer suites, as well as the world class Yäan spa across the road. It's an opportunity to reconnect with nature, with both thick jungle and a quiet stretch of beach, but with luxurious accommodations and facilities. 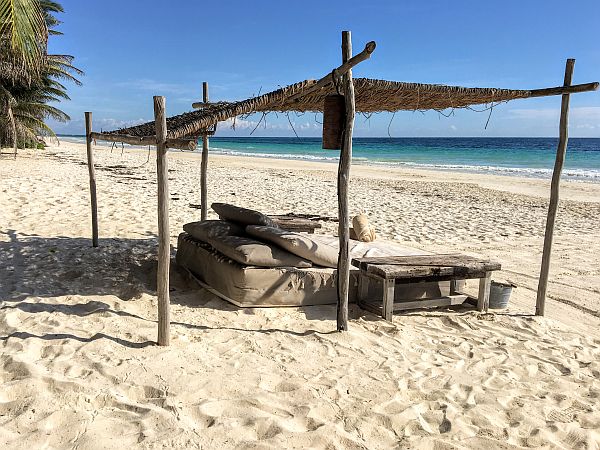 The hotel has two stylish beachfront pools, two restaurants and a beach bar. Free yoga and meditation classes are offered each morning. Vibrant colored rugs, bright modern chairs, and vintage tables fill wooden, open-air, communal areas. The smell of burning copal resin drifts through the property, with sunbeams filtering through the trees and hitting the smoke adding a mystical touch.

Driving slowly down the traffic-filled, bumpy road, you'll reach Be Tulum at the far end, just before the gate to Sian Ka'an Biosphere Reserve. Receptionists and other staff wear long, grey robes and walk around barefoot, with sand reaching almost every corner of the property. At check-in, you might be offered a glass of champagne or a cocktail of your choice, such as a spicy margarita.

On a walk through the jungle towards your suite, you will see several two-floor buildings covered entirely with wooden boards, reclaimed from train tracks. There are 23 suite categories at the property, with some suites on the ground floor, others on upper levels, some situated closer to the beach, others set further back in the jungle. Our suite was on the second floor and belonged to the Air category. It was huge, especially by Tulum standards. 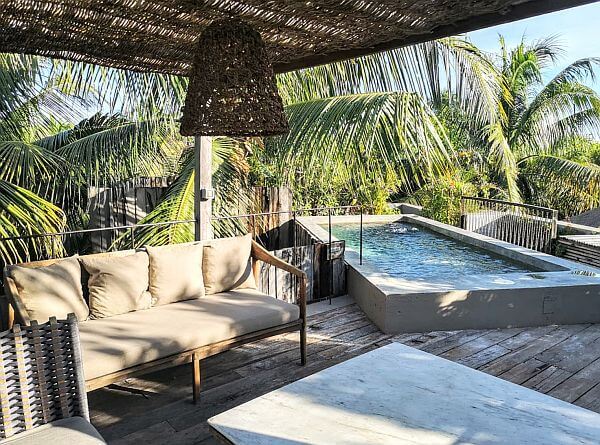 As you open the door, you'll find a small area with tropical plants and a skylight above. From there, the room divides into two parts: the living space and the bedroom area. The living space is ample, with a red rug, a modern wooden coffee table and leather chairs with embroidered throw pillows. The interiors have a washed concrete finish and floor-to-ceiling dark, grey curtains. There's also a desk, a vintage-style speaker and a minibar with Premium drinks for sale, though there's no coffee machine, which, especially at Be Tulum's prices, seems a shame. Right in front of the living room, there's a large terrace, surrounded by wooden panels for privacy.

Opening a second door, a staircase leads up to a spacious roof area. You can look out over Sian Ka'an's lagoons and sprawling jungle. There's a shaded seating area and a plunge pool, large enough for a cooling dip. Even though there are a few of the resort's other buildings nearby, you still have enough privacy, due to the many surrounding palm trees. This is a great spot to sunbathe or watch the sunset. You can also see many shooting stars at night if you're lucky.

Downstairs, the bedroom follows the same design: washed concrete and grey curtains, with windows looking out into more greenery. There's a comfortable king-sized bed with grey linens and a large wooden dresser, but there are nightstands to put anything on next to the bed and no bedside lamps, so if you want to lay down reading a book, you'll get dazzling light from the ceiling in your face. It feels like an area where style was favoured over functionality. Another downside is that the long curtains make the rooms generally quite dark.

The adjoining bathroom has a powerful rain shower and a brightly lit sink area. Outside, there's a big black stand-alone bathtub surrounded by tropical plants.

To start a relaxing weekend, you can visit Yäan Spa across the road. A sculpture of a Mayan goddess and copal burners along the entrance mark the way, leading you into one of the resort's highlights. Expect the same robes as in the front desk, but with more of a Zen attitude among staff. The spa concept is to mix regular massages with "healing" treatments, adding pre-Hispanic indigenous elements. Every guest also has an inclusive one-time-access to the enjoyable water circuit of sauna, steam room, hot and cold showers, and pools. 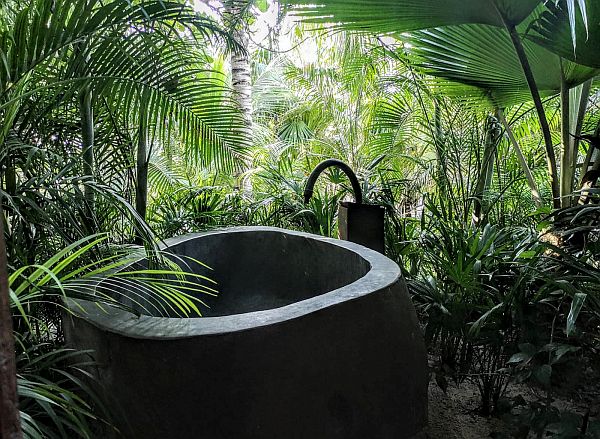 I opted for the Sobada Maya treatment. A Mayan healer introduced herself and led me to one of the air-conditioned cabins set among quiet jungle and neat gardens. She started with a ritual that involved passing a copal burner around me and sweeping my body from head to toe with fresh basil stems. A very firm, thorough massage followed, which focused some time on the stomach for digestive health. In the end, it made me feel lighter and incredibly relaxed.

After your treatment, you can walk down to the beach to take it easy on one of the shaded beds and by one of the pools. During my visit, Tulum had now been free of sargasso for months, so the beach and clear blue ocean looked beautiful again. (In this age of climate change though, it could return each year though; we don't know.)

You can have lunch at Be Tulum's Hotel's beachfront restaurant, Maresias, which has a huge and appetizing selection: four full pages of both healthy and indulgent choices, from ginger tuna cooked in a wood oven to a watermelon salad, or from vegan penne pasta to salmon tataki. Most main dishes are above $20. 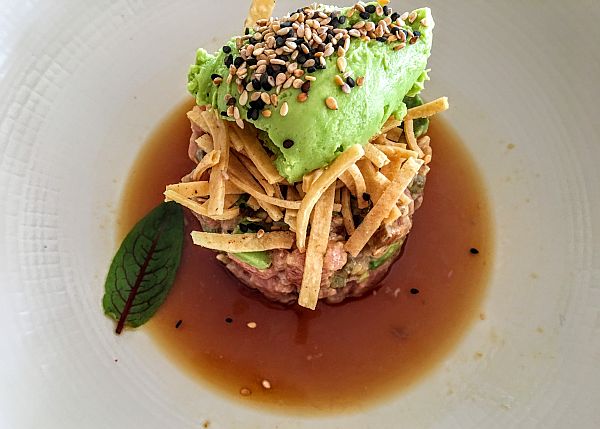 Maresias is also where breakfast is served each morning. Attentive waiters serve fresh coffee, tea and juices, plus large plates of fresh fruit, tastefully presented. Options include eggs cooked to order, with smoked salmon or Mexican style (Rancheros, Divorciados). All of the dishes are generous and delicious.

Next morning, you can go for a day out to explore the local cenotes or Sian Ka'an Biosphere Reserve, or just relax around the hotel. At night, you could dine in Ocumare, Be Tulum's signature restaurant. The menu was created by the Argentinian chef Mauricio Giovanini, who's been awarded a Michelin star at one of his other restaurants. The roadside restaurant's concept is based around small sharing plates inspired by Giovanini's worldwide travels, with Indian, Moroccan, Argentinian and Spanish flavors, and softly lit by reed lamps hanging from the ceiling. On one side, there's an open kitchen, where you can see the executive chef communicating with staff. On the other side, there's a bar with colorful bottles containing herbs and garnishes. 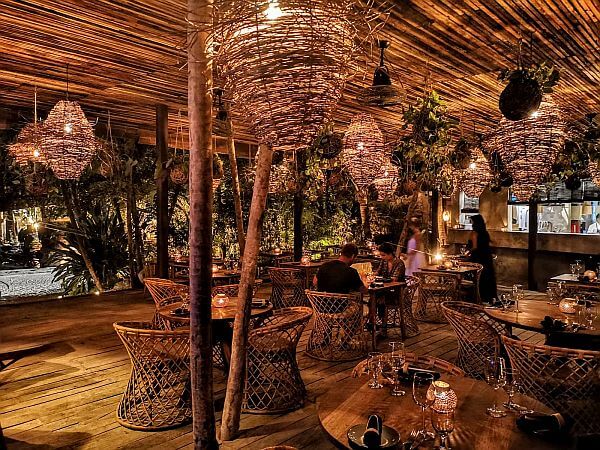 To start, we shared the falafel six grape-sized balls in a bowl of yogurt with pickled cucumber. We also ordered the grouper, which was burnt with a blow torch by the waiter to give the fish a fragrant finish and served on a bed of purée made with onions and Thai vegetables. Plus we tried the hog snapper, which comes with a purée made with dehydrated tomatoes and roasted echalote (a type of wild onion).

Some of the dishes were warming, flavorful and well-presented, while others were unremarkable, which is a disappointment, especially with the high prices here. The portions are much too small, too, often just a few mouthfuls. I saw a couple next to my table sharing a plate with one shrimp that goes for $20. The hostess recommended that three dishes usually work for two people, but I would recommend that you need around six plates, including a dessert, to feel satisfied. We had to order two more dishes, including a small beetroot salad and a Chiripá, coin-size gluten free bread discs accompanied with Indian dips. Each small plate was $15 to $25. 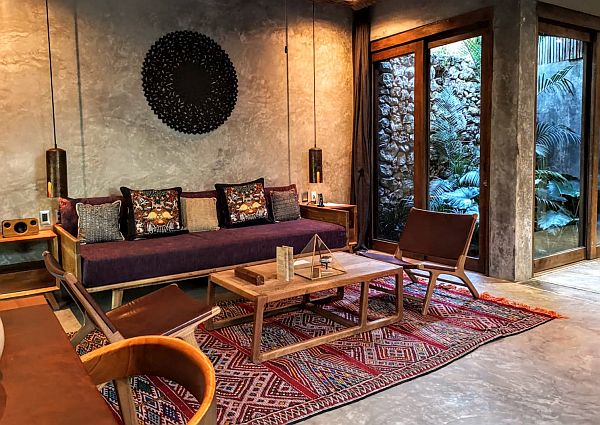 Overall, Be Tulum Hotel is a resort for visitors who like to relax in elegant surroundings. In places, it is certainly guilty of two common Tulum crimes: overpricing and style over substance. But the suites are smart, comfortable and spacious, and the communal areas are creatively furnished. Service is good, particularly down at Maresias, where the food is hearty and colorful. The yoga classes and included beach activities, such as SUP and snorkel gear, will help you make the best out of your holiday. You'll leave the resort with a significantly lighter wallet, but also a lighter feeling after a few days relaxing at this smart jungle retreat, especially if you make time for the outstanding spa.

Review and photos by Andrea Moreno