We spent our first night at Hotel El Mirador both recovering and resting up: this day of adventure was just a warm-up. The next day half of us had plans to turn the amp up to 11 and take whatever the adventure park could throw at us. I tried some sotol (liquor from a wild agave-like plant) and we had a fine dinner while listening to live music from a local duo. A full moon shone over the scene we saw before bed from our balconies, bathing the canyons in an eerie light. 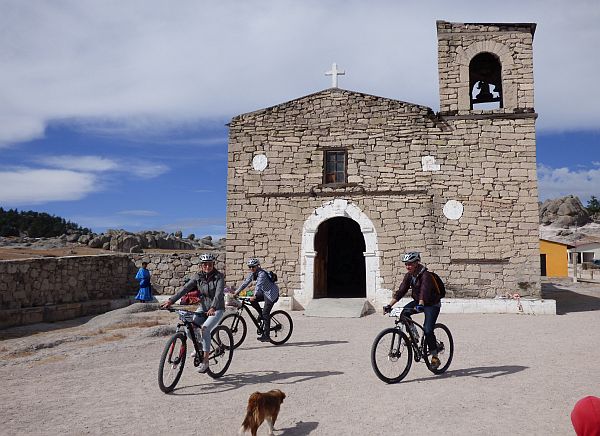 Hanging Onto the Side of a Canyon Cliff

Fueled up on a hearty Mexican breakfast, we headed back to the adventure park for two rounds of heart-pumping courses. The first would be a via ferata course along the side of a cliff, the second along what may be the world's most extensive zipline and extension bridges course.

The only clue we had about what the via ferata would be like is when we saw a few people climbing up at the end from the cable ride. We couldn't see any of the course from the start, where we walked to a platform with ropes hanging down to some unseen landing space. Harnessed up but with little instruction, we're told to rappel down to the bottom and wait for the others there. This was not a heartening start. It's an 80-meter drop down a rock face with crevices and jutting rocks, so I gingerly made my way down one footstep at a time, my legs perpendicular to the ground way below: a position that never feels natural.

Then it got worse.

We climbed up a shaky ladder bolted to the rocks then walked along steps of steel rebar jutting out, moving our carabiners attached to our bodies by straps to keep us from tumbling to the bottom of the canyon. We made our way through a cave, up another ladder, and across a shaky bridge made of nothing by steel cables, with just one other to hold onto at shoulder level. The logical side of our brain tells us that thousands of people have done this before, that we're clipped in all the way. The instinctual side of our brains is screaming in fear, asking why we are risking death around every turn. 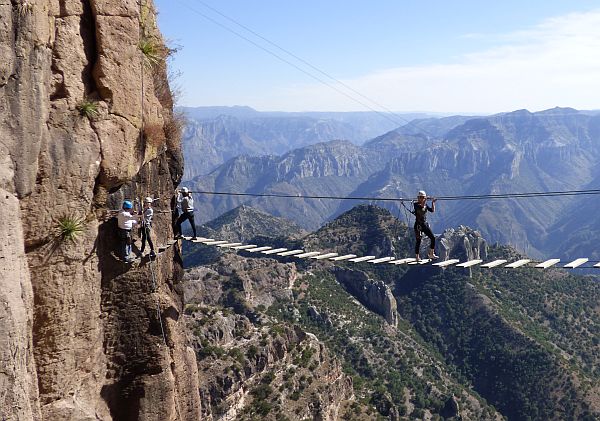 After entering and exiting another cave we came to a crossing with no bridge, just a rope secured to our side and a guide waiting on the other side, nothing but air between us. As a few people started to whimper at the thought of swinging across that open space, the guide on our side pointed to an escape route—the only one that exists on this whole course. One woman took him up on it while another swung across without a word and landed effortlessly on the other side. Now there was no choice. My manhood required a swing of faith.

The swing across was over in no time and the first woman across was already snapping selfies on the rickety-looking wood slat bridge that comes next. After more steps across a cliff face that are really just embedded pieces of rebar, the last big challenge is a bridge that has three touch points. There is a steel cable to hold onto for the left hand, another for the right hand, and one to put your feet on. Like a tightrope walker with training wheels, we gingerly walked across to the last climb up to the finish. Our hearts finally stopped beating in fear. For the moment anyway...

Flying Across the Canyons Sky

The Barrancas del Cobre Adventure Park zipline course makes most other such offerings around the world look like a tame warm-up. The ziplines average 600 meters in length and one is twice that long, more than a kilometer. Here you zip across from one side of a canyon to another, looking down hundreds of meters. You cover a distance that would take the better part of a day to hike between. 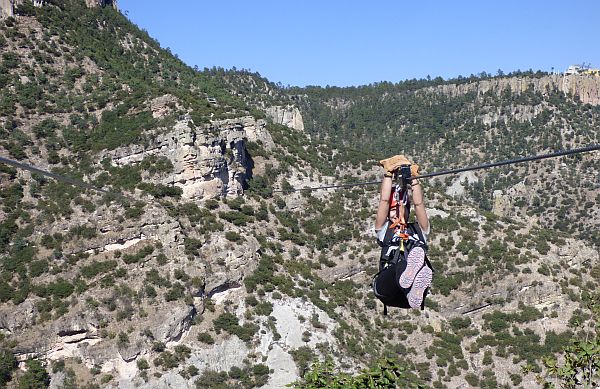 Between the rapid traverses that reach speeds far faster than the train we rode here, there are two suspension bridges that span other parts of the canyons. These can be downright frightening as well for anyone who has even a slight fear of heights, though we're clipped in with straps and carabiners as we walk across, easing fears about a sudden slip.

The last section of the journey is fast and thrilling, with a fast braking at the end. I found one of my colleagues stretched out on bench, exhausted, but we've got a hike ahead of us to get up to where the cable ride leaves from. We hadn't eaten since breakfast and realized we were famished after expending all that energy. Our bodies had been reacting to perceived threats for hours, on high alert the whole time.

When we get to the other side, back at the visitors' center, our guide has started lunch with the half of our group that opted out of the extreme sports. We order up beers and Chihuahua specialties and end up having the best meal of our trip. We took a gentler way back to the hotel for the night: half of us walked along the hiking trail from the adventure park. The other half rode horses.

Ay Chihuahua! There would no trouble sleeping that night.

I toured this region of Chihuahua with one of the most experienced local operators: Copper Canyons Expeditions. The bike rental operation in Creel is part of 3 Amigos Adventures. For more information see the Chihuahua Tourism site and the El Chepe train site.