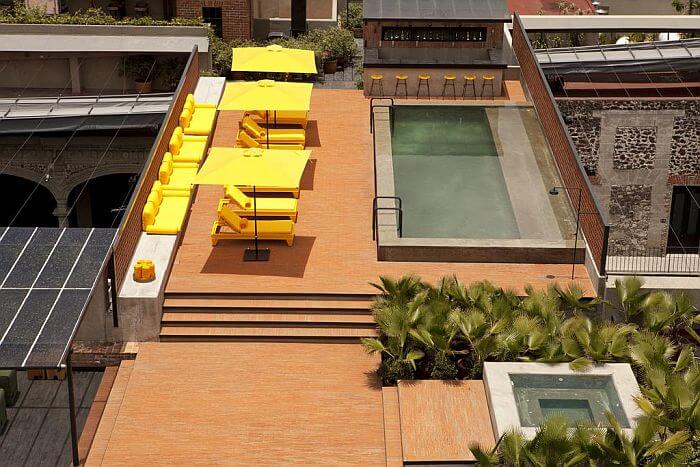 Grupo Habita has done it again. The organization specializes in hotels throughout Mexico (and now in New York City as well) that quickly attract a hip, well-heeled crowd of Mexicans and savvy foreigners. Their newest creation, Downtown Mexico, is no exception. They took a neglected colonial building—the 17th century baroque palace of the Count of Miravalle—and brought it into the 21st century. The design team, Cherem-Serrano Arquitectos, have respected the original architecture while adding a distinctive blend of what they call "bohemian-chic elegance." And it works. 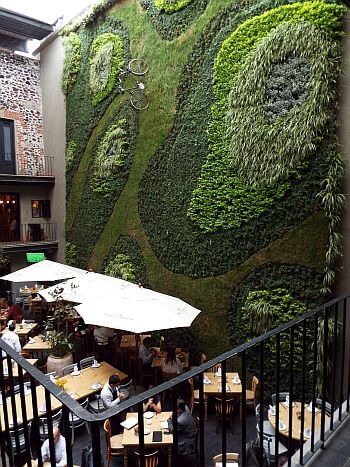 Context changes everything. The hip rooftop terrace and pool at Downtown Mexico wouldn't be so remarkable in Miami or Los Angeles. But in the historic center of Mexico City, just a few blocks from the ruins of the Templo Mayor, where Montezuma offered human sacrifices to the Aztec gods, it comes across as something special—there's nothing like it for miles around.

Their investment in the centro is a bold move. Back in the 1950s the Centro Histórico was the hottest part of Mexico City, filled with nightclubs, theaters, restaurants and swanky hotels. Maria Callas vaulted to international stardom with performances at the fabulous Aztec-Deco Palacio de Bellas Artes. But the intervening years saw the money move west toward Polanco and Lomas, and the earthquake of 1985 put a final nail in the coffin. The centro became seedy, unsafe and unloved.

But the past five years has seen major changes. Motivated by Mexican business tycoon Carlos Slim (in 2012 the world's richest man, according to Forbes), investment in the center, a UNESCO World Heritage Site, has steadily grown. There are increased security measures, new paving and lighting, and hundreds of old buildings have been spruced up. New museums, hotels, restaurants, outdoor cafes, and shops have opened. Several streets are now traffic-free pedestrian zones. New bars, jazz clubs and dance halls draw crowds on weekend nights. The Downtown Hotel is the most dramatic statement yet that el centro is back in business.

Downtown is more than just a hotel—its 17 rooms occupy only a portion of the massive palace. Its spacious rooftop terrace has become the hot place to meet for a drink in Mexico City. There are two restaurants on the ground floor, both in greenery filled open courtyards (with retractable covers for the rainy season), and you'll find more than a dozen small shops on the mezzanine. The theme here is Mexican ("We didn't want Starbucks here," the manager stated). The restaurant Azul Histórico is the creation of noted Mexican culinary star Ricardo Muñoz Zurita; the stores feature young Mexican designers, an art gallery, several gourmet food outlets, and shops offering traditional crafts.

The feeling throughout is more egalitarian than snobbish. Part of Downtown is a hostel (called Downtown Beds), with rooms containing 4 to 8 beds with shared bathrooms (but with a separate entrance from the hotel). The staff is casually dressed and friendly. The design concept bohemian-chic elegance' makes use of less expensive, earthy materials like clay tile floors and smooth concrete walls. The lacy, perforated brick used throughout the hotel feels both industrial and playful — and adds a clever airy contrast to the heavy stone of the colonial era building. Walls of exposed volcanic rock are reminders of the nearby Aztec ruins. A generous use of natural wood adds a contrasting touch of warmth. Simple upholstered furniture in the lobby and terrace invite you to put your feet up and relax. The striking mural by Mexican artist Manuel Rodríguez Lozano, a contemporary of Diego Rivera, graces the main stairwell. 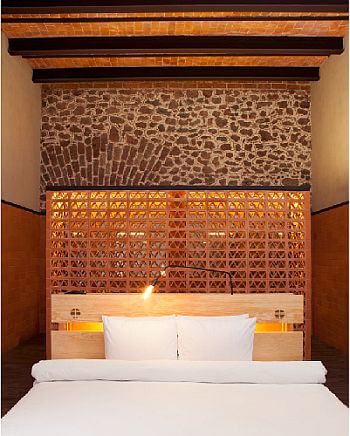 Of the hotel's 17 rooms, only the 6 larger suites really qualify as luxury accommodation, so be sure to book one of these. The smaller rooms have the same elegant design, but since they face interior courtyards suffer from a lack of ventilation—the door is the only window, so you must choose between air and privacy. The largest room, the Revolution Suite — a whopping 700 square feet with 20–foot ceilings — has a balcony with great views of the street (no need to worry about noise as the soundproofing here is top–notch).

Bathrooms in all cases follow the contemporary trend of openness, with glass doors (or none at all). Anyone requiring complete privacy in the bathroom will be unhappy here.

You'll find all the expected amenities: nice linens, bathrobes, slippers, free Wi–Fi, flatscreen TV, ipod dock, minibar, room service. A breakfast of coffee, juice, and a huge plate of fresh fruit is included in the price of the room. If you don't want to venture out there's a small restaurant in the lobby with a simple but varied menu. The only inhospitable note for amenities was the lack of free bottled water in the room.

We must stress though that the reasons this hotel has been featured on every "hot list" and "it list" run by travel magazines are its interesting design and the fact that it's part of the Habita Group. It didn't take long for guests to complain of poor ventilation, dim lighting, scarce storage space, a "spacey" staff, and noise—even though the hotel has recently added 17 soundproof rooms to address the latter. When the weather warms up the rooms can get stuffy. This is a better bet for the young and sleepless than the Four Seasons crowd.

The central historic district is the most exciting part of Mexico City, where traces of its rich 700–year history abound. Until Downtown Mexico opened its doors, anyone looking for a stylish and comfortable hotel had to look elsewhere—it's a welcome addition.

Review by Jim Johnston, photos courtesy of Downtown Hotel except where indicated.