For travelers who long to delve into the gastronomic treasures of Mexican street food, Eat Mexico offers a variety of intimate culinary tours in Mexico City and Puebla. 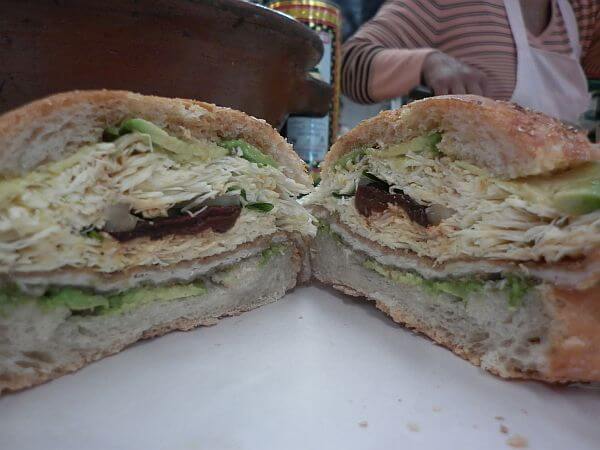 What is the secret to a good cemita? The bread. Slightly crispy on the outside, soft in the middle, a little wheat germ from the oven still stuck to the bottom, and a chipotle pepper doesn't hurt either. That's what I've got on my milanesa cemita. Add a mound of cheese and some sliced avocado and this is definitely the best thing I have eaten on my Taste of Puebla tour so far.

I'm sitting at a lunch counter with three other strangers, unabashedly stuffing my face, and this is the sixth stop on our tour!

I should be full by now. So far we've eaten pelonas, molotes, homemade candies, tacos árabes and tacos pastor, all before 1pm. It's overwhelming ? ly delicious and Rebecca, our guide is a master of the foodie spots in town.

?When the Spanish built the city they filled it with churches,? she tells us, ?and those nuns and monks are believed to be the creators of some of Puebla's most important foods — mole poblano, chile en nogada and many of our traditional sweets and cookies.? 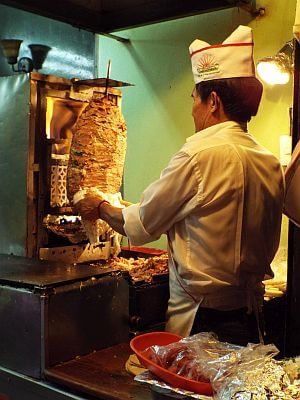 Tacos árabes are also supposed to have been created in Puebla. They are tacos made with strips of pork, onion and parsley, all cooked on a traditional shawarma–style grill that you often see used for tacos al pastor (the Mexican cousin of the shawarma – pork marinated in achiote, onions, other spices, even peanuts sometimes). Tacos árabes are served in warm pita bread, instead of Mexican tacos' traditional corn tortilla and are about double the size of a normal taco. They are heavenly.

But tacos árabes and tacos al pastor are a little more commonplace in Mexico (in fact they say you can find tacos al pastor in every corner of the country). What makes Puebla stand out gastronomically are its sandwiches.

?This was always a very fertile area,? says Rebecca, ?and so lots of wheat was grown here by the Spanish, and with wheat, came bread.?

The pelona sandwich, a kind of Mexican barbeque with spicy red salsa, is made on a deep–fried bread. It's called "pelona" — "bald" in Spanish — because of the way it looks. The Molote is made with a corn dough bread.

These two sandwiches were the first stops on our tour and the favorites of my companions, a couple from Omaha down for several days doing missionary work.

It's an eclectic group that take Eat Mexico tours, the only real commonality is that they are all foodies and adventurous enough to eat on the street in Mexico. Eat Mexico offers tours both in Puebla and Mexico City to out–of–the–way eateries and famous must–eat street stands. All their stops are fully vetted for cleanliness, quality, and taste. Most tours, like the one I'm on, stop in markets or tortillerías so that eaters get a background in Mexican food, as well as a belly full.

Our tour in Puebla comes with a little history. Did you know that a massive river used to separate the rich from the poor in Puebla? That it's the fourth largest city in Mexico? That the Victoria market downtown was once the?central de abastos, or the main center for commerce (including food distribution), in the city?

Maybe you knew all those things, but it's likely you've never tasted a sweet concha roll right out of the oven or seen an industrial mole grinder. These are all highlights on the tour, as Rebecca weaves us through town behind renovated textile factories and down cobblestone pedestrian streets.

Our final stop is a bar on a tiny plaza where they make their own sweet liqueurs. She tells us it?s a place for ?afternoon drinkers? as it closes by 5:30pm. The bar, converted from an ancient grocery and supply shop, is packed with Mexican tourists sipping from their glasses and enjoying the fading daylight. When we are served shots of sweet, dark, vanilla–flavored liquid with toothpicks of salty cheese floating in them, we hesitate, but they turn out to be decadent. We should have trusted Rebecca, she seems to know how to sniff out deliciousness in Puebla.

The next day, coffee and a slice of toast will suffice for breakfast and I am off and running to Mexico City where I will continue my food adventure on another Eat Mexico tour, this time Late Night Tacos and Mezcal.