Like the "Build it and they will come" advice from the Kevin Costner character in the movie, Field of Dreams, once golf courses started going up in Cabo San Lucas and San Jose del Cabo, come the golfers did after the building.

Mexico's premier golf destination keeps adding more courses and upgrading the ones that are there, creating a dream vacation spot for those who love the mix of greens, desert, and the sea. 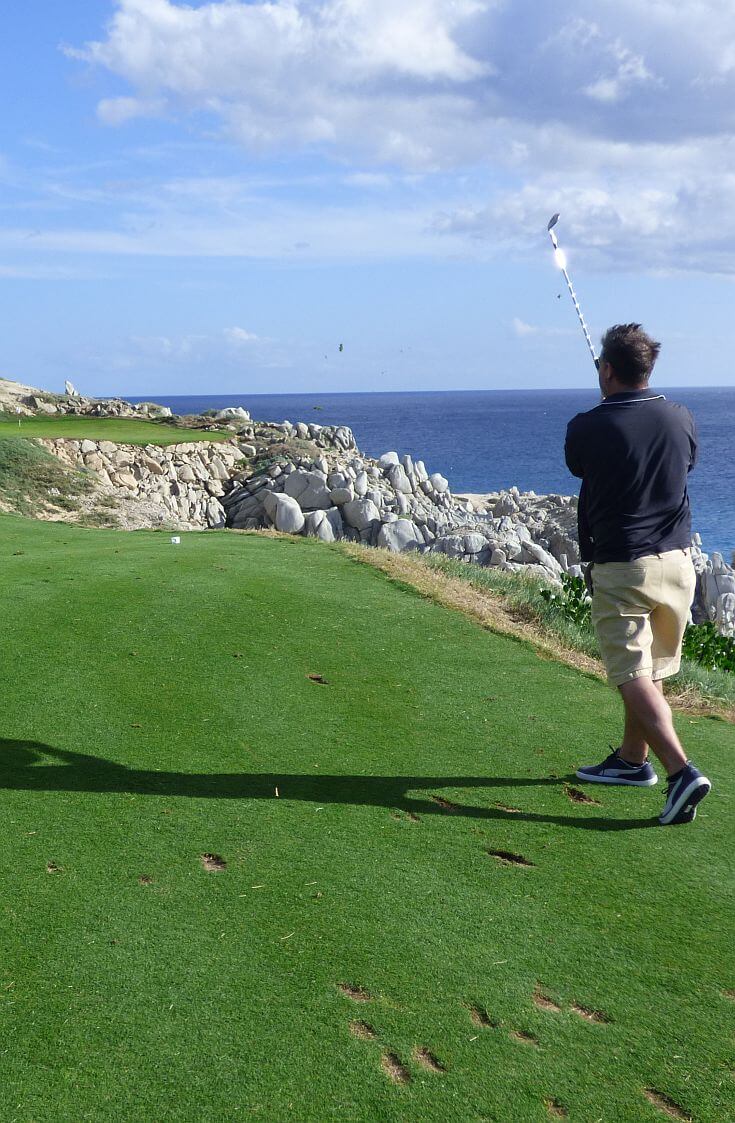 Starting from almost nothing—just a 9-hole municipal course a few decades ago, now called Vidanta Los Cabos Golf—land developers in the Mexico territory of Baja California Sur have built some amazing fields of dreams for golfers. On what once was an arid wasteland favored as a place to stay by fishermen in search of trophy marlin, there are more than a dozen golf courses-plus always more on the drawing board—and plenty of deluxe accommodations to whet the appetites of discerning golfers.

It's hard to come up with any location in the Americas that has as many stunning courses with dramitic views as Los Cabos. It truly deserves the title of the "Golf Capital of Latin America."

The metamorphosis started in the early 1990s when the developers realized that the scenic coastline with views of both the Sea of Cortez and the Pacific Ocean coupled with 350+ days of sunshine represented a vein of gold just waiting to be mined. By moving a lot of dirt on the desert and mountainside, adding some man-made irrigation lakes and finding enough water by building their own desalinization plants, they created some championship courses that combined ocean, desert and mountain characteristics. Add luxury accommodations and home sites and a new destination was created for golfers.

These developers—most of the original ones are no longer involved—spared no expense in the building or when it came time to obtain architects. Jack Nicklaus' signature is currently on six of them, with another one scheduled in the near future. Other top designers to leave their marks include Tom Fazio, Davis Love III, Robert Trent Jones Jr., Greg Norman, and Tom Weiskopf. It's a hall of fame in one travel destination. 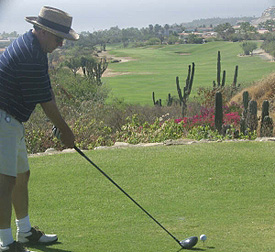 Nicklaus' first designs were the Arroyo and Mountain nines at Palmilla Golf Club. It's on the north side of the Transpeninsular Highway between the Mexican town of San Jose and the party hearty Cabo San Lucas where the first marina is located. He routed holes around long waste bunkers, ponds, and deep arroyos to create a target style of golf with big shifts in elevation. Later, a third nine, the Ocean, was added with one hole playing down a canyon to the water's edge where the luxurious One & Only Palmilla Resort is located. The 27-hole complex received an update in 2015 after Hurricane Odile caused major destruction.

Given some land a lot closer to the water, Nicklaus' second design was the Ocean Course at Cabo del Sol, which opened in 1994, The back-to-back par-3s on numbers 6 and 7 play adjacent to the sea and then the par-3 number 17 calls for a forced carry over a rock outcropping and a sandy beach before the par-4 number 18 clings to the sea. 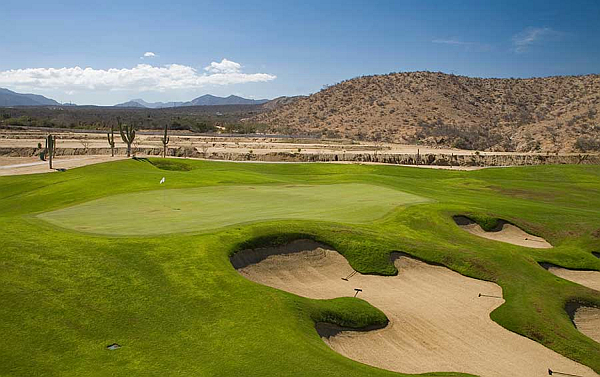 The sister Desert Course at Cabo del Sol designed by Tom Weiskopf opened in 2001 and provides more target-style golf, including shots over canyon-like arroyos, as it climbs the mountainside on the other side of the highway. Vistas of the sea are visible from every hole.

Nicklaus also did the El Dorado Golf & Beach Club, but six holes of his original design were eliminated in favor of high-priced home lots and six new holes were built higher up. It's now an exclusive private club for members and their guests.

The Next Round of Los Cabos Golf Courses

Nicklaus' design company did the Club Campestre, nestled in the foothills of the Sierras, which opened in 2007. The fairways are wide, but spray the ball a little and you are in the desert. It's the greens where the course shows its teeth. It was the first course to use Paspalum grass, more tolerant to salt water, and the turf has matured very well to provide an ideal playing surface. 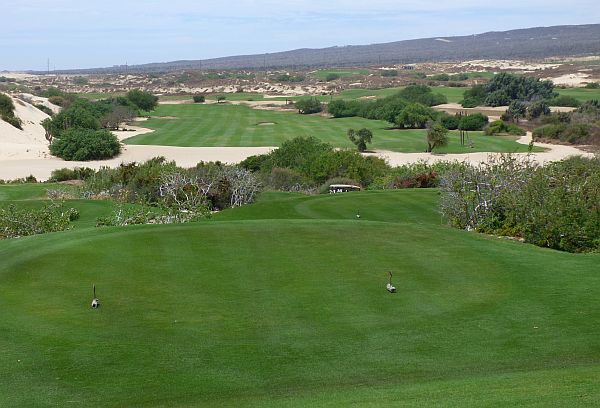 The Diamante complex high on a hillside fronting the Pacific Ocean has three courses. First was the Dunes Course at Diamante, a Davis Love III links design on the wind-swept Pacific side. It was voted as the best new international course when it opened in 2010. Davis Love, along with two brothers, have made a few changes. First, they changed the 12th and 13th holes, then they added a new par-3 10th after eliminating the old 18th.

The sister Tiger Woods-designed El Cardonal opened in 2014, featuring an old-style design like the courses Tiger grew up on in Southern California. These offers plenty of options on how to navigate each hole.

Diamante also features The Oasis, a 12-hole par-3 course routed around a big lake with 400 palm trees, as another option for golfers. 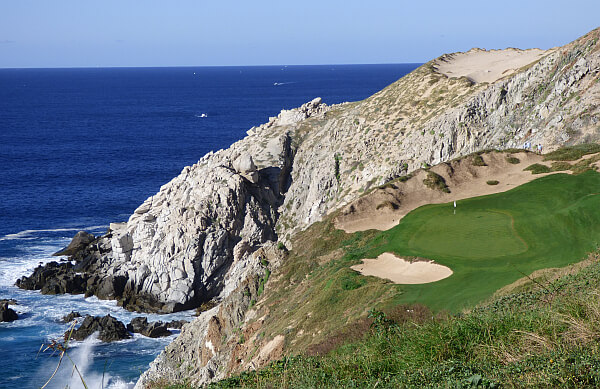 The highly anticipated Nicklaus-designed Quivira opened in 2014 and features a half-dozen of one-of-kind holes draped atop the cliffs near the Pacific. It's certainly the quirkiest and most challenging course in the Baja Peninsula, traversing massive sand dunes, rugged cliffs, white sand beaches, private coves, and desert canyons near Pueblo Bonita. A second Nicklaus design may be added here eventually. See our full Quivira Golf feature story here. 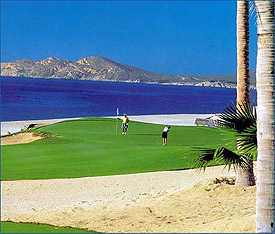 Cabo Real, designed by Jones, plays down to the beach on the front nine and explores mountain foothills on the incoming nine, bringing players to 450 feet above sea level at the par-4 14th hole. The par-4 9th features a large double green (50 by 125 yards) guarded by water that will also be used if a new 9 holes is ever added. Jones is finishing up work on Costa Palmar Golf Club on the East Cape for guests of Four Seasons Resort.

The Cabo San Lucas County Club, designed by Roy and Matt Dye and given a facelift by Agustin Piza after damages by Tropical Storm Lidia in 2017, offers views of Land's End with its spectacular arch.

The Club at Querencia, designed by Fazio, is for members only. It's on roller-coaster terrain with very few level lies. The lightning fast greens add to the challenge. It also has a spectacular Tuscan-themed clubhouse that includes spas for men and women.

The Fazio-designed Chileno Bay, first open in 2013 and then re-opened in 2016, is for guests at Chileno Bay Resort while the Twin Dolphin Golf Club, a Fred Couples-Todd Eckenrode design opened in 2018, is open to guests at Montage Los Cabos.

We recommend staying at one of the best luxury hotels in Los Cabos. These properties have a lot of clout to get you onto the greens of courses that are tough to crack for walk-ups and some have golf packages available in the room booking options. To check into booking a tee time or to get more information, see the official sites here: