A homage to contemporary design, the minimalist Habita Hotel offers the beau monde a stylish home away from home. 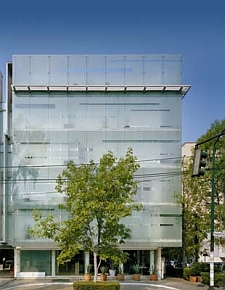 A meticulously designed glass cube, Habita caters to a travel segment long overlooked in Mexico, the rapaciously hip. Hotels it seemed were built especially for business travelers, for tourists, even for people who prefer airports to hotels, but not for designers and their devotees. Thanks to Habita, artists, models and creatives have a place to hang their signature weave Missoni fedoras.

This fashionably converted low–rise makes the most of its limited square footage with predominantly flat, light–colored surfaces and a minimalist style that eschews clutter. Lots of frosted glass panes and partitions etched with transparent strips give the illusion of boundless space and at the same time offer guests the option of seeing and being seen. You feel instantly cooler after stepping inside, and not just because of the exposed high ceiling and matte marble flooring.

A carefully compiled jazz soundtrack wafts discreetly overhead and a long rectangular bar that leads from the entrance to the check–in area is lined with wood–and–aluminum stools that invite you to chill out by gracefully perching––though not by any means slouching––and having a long–stemmed drink. Habita's devotion to an aesthetic ideal has the effect of inhibiting schlepping of any kind. 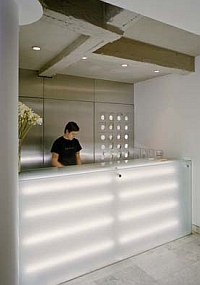 On the other side of the bar is Lobby, the newly unveiled restaurant featuring a mostly prix fixe menu designed by Mexican culinary wunderkind Enrique Olvera (two courses, $27; three courses, $32). Lobby turns the prevailing logic behind food and beverages on its head, but accurately reflects the odd tax status of the domestic wine industry: the national wines are pricier than the imported. A blend of dark wood and charcoal grey tweed, Lobby's sleek furniture is decidedly masculine. Large hanging mirrors along one wall encourage voyeurism. The total effect is one of a swanky and seductive airport waiting lounge circa the 1950s.

Though admittedly a slave to fashion, Habita also knows when to let its hair down. Hotel personnel wear black tees with the words "HABITA ESTAFF" printed across the front. Facing the elevators, wall mounted security monitors flash images that alternate between an artist's video installation (this week, goldfish) and whomever the surveillance cameras happen to capture in the elevators and outside the building, as if to say "we know you know we're watching" and more pointedly "let's all watch."

The 36 guestrooms are spartan but stylish, with dark chocolate carpeting, blond wood furniture, white walls and low–lying tatami–style beds; some have balconies (though the hotel's frosted glass exterior walls only let select slices of the surrounding urban landscape seep through). Amenities include Kiehl's bath products, 24–hour room service, and two in–house music stations in case guests want their music piped in. Most do, and for them the Habita LifeSounds CD, subtitled "global music for cool and natural people," is for sale at the front desk (as are "Estaff" tees, $20 each). 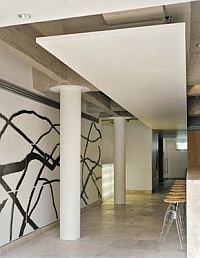 Habita has managed to pack a lot into its compact frame. There's a small fifth–floor gym with Life Fitness machines, and an outdoor terrace whirlpool and sizeable lap pool. A circular staircase leads from the poolside sun deck to the open–air rooftop bar, where Mexico's young elite meet. On Friday nights, you may have to compete with the glittering bar crowd for precious elevator space, but presumably you won't mind because you live for this stuff. Once nestled in one of the coveted terrycloth loveseats or sofas facing the bar's outside fireplace, you can celebrate with a signature Habita martini made of tamarind pulp, cognac, champagne and cassis, and watch a late–night movie projected onto the side of a building a few doors down.

With its emphasis on design, Habita clearly isn't for everyone. But for fashion conscious business or leisure travelers, Mexico's pioneer "design hotel" is the perfect choice.

Review by Shooka Shemirani, photos by Paul Rivera for Habita.