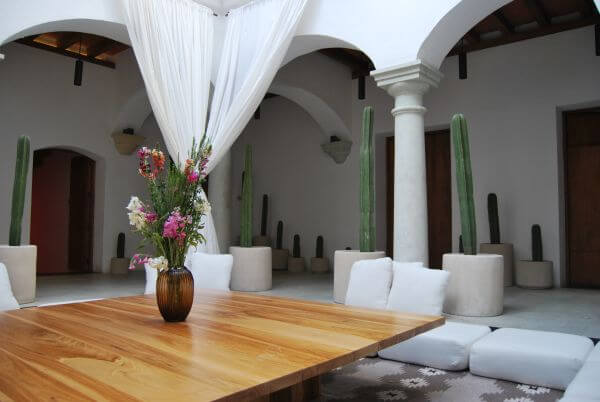 Stepping over the massive wooden threshold of Hotel Sin Nombre, guests leave the hustle and bustle of downtown Oaxaca City and enter into an oasis for the senses. You're greeted by a central sun-filled courtyard where low tables are bordered by white floor pillows and cushions in a harem-style dining room. This is the heart of the hotel. Not only is it 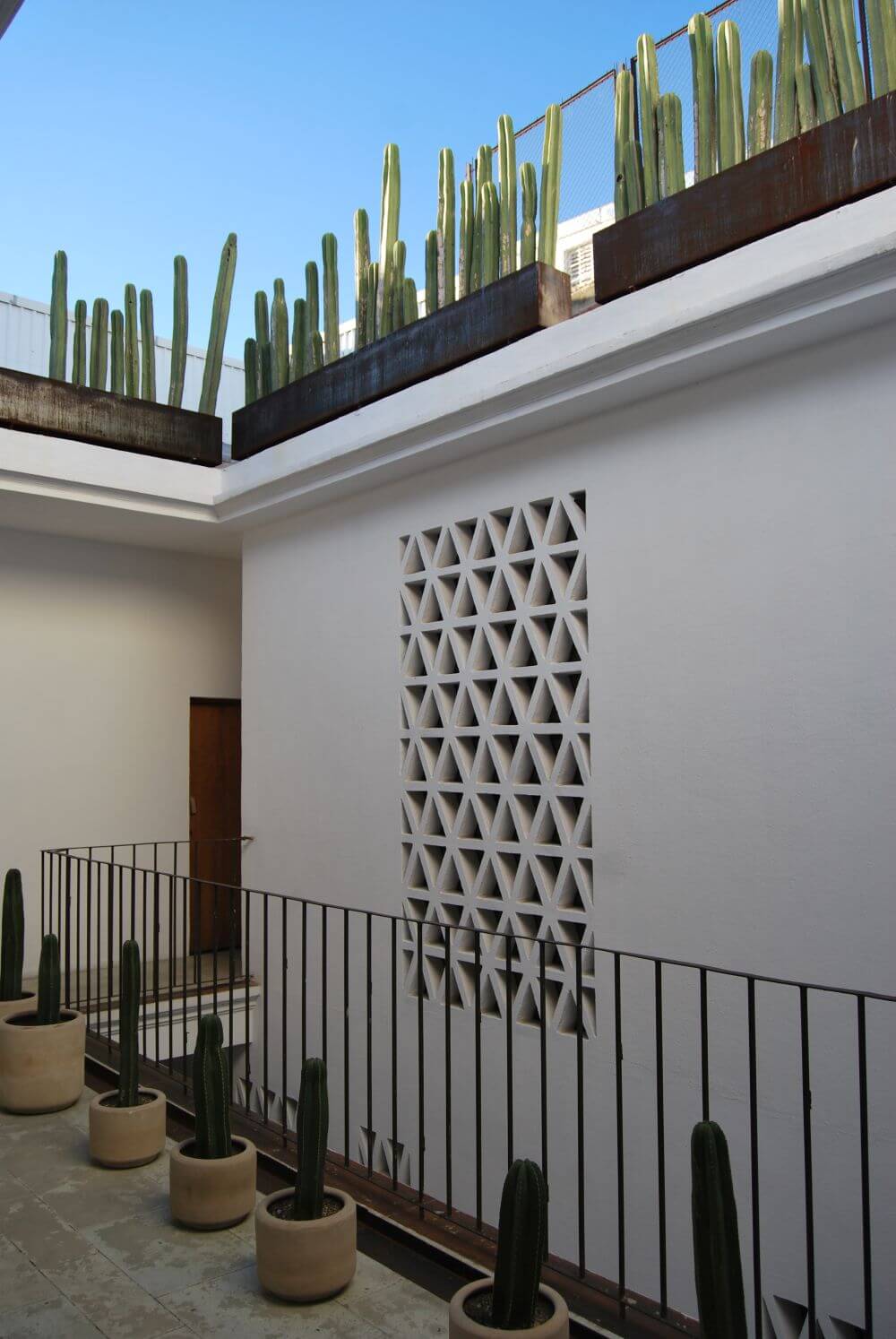 incredibly Instagramable, but it's also where locals and guests alike can enjoy the vegan menu of the hotel's chef, Isreal Loyola Espinosa.

The chef prefers vegetable-centric over vegan (even though without animal proteins or products it is vegan), insisting that his culinary vision is not based trends but instead the traditional diet of local Oaxacans, historically centered around vegetables and greens instead of meat. With only a few months into this new endeavor, both the hotel and the restaurant seem to be drawing a strong crowd of travelers and locals that want to experience both hotel and restuarant for themselves.

The hotel opened in August of 2020, mid-pandemic and has had something of a "soft opening" for several months. That might be why all the regular kinks that seem to show up with a new hotel had been smoothed out by the time we visited. Furniture, linens, bath products and even the cotton bathrobes (which don't cover much but are surprisingly comfortable) are all high quality and thoughtful. Praise goes to Sin Nombre for their reusable glass soap, shampoo and lotion dispensers and refillable glass bottles of water with real drinking glasses. 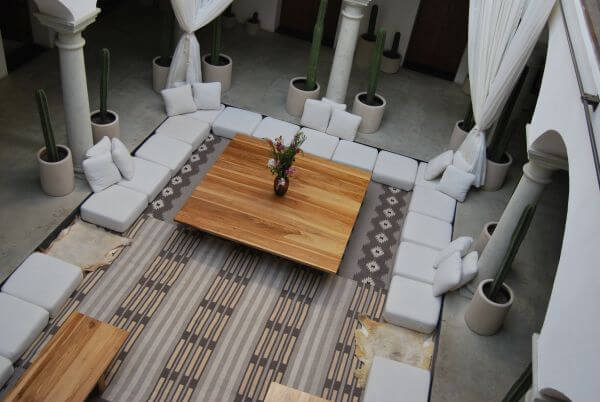 If I had one amenities' complaint it would be the inconsistency of the hot and cold water (it goes from scalding to freezing and back again in a matter of seconds). But I was warned about this by staff, so I assume it's an ongoing problem that they are working on.

Rooms have a modern elegance, all with the soaring high ceilings common to colonial architecture. Simple, well-made wooden furniture is matched with fluffy duvets, sheep skin rugs and cool stone and wood flooring in rooms and bathrooms. Most of the rooms have floor-to-ceiling mirrors somewhere along their walls, which helps to create a feeling of expansion in some of the smaller ones which run 100 to 150 square feet. 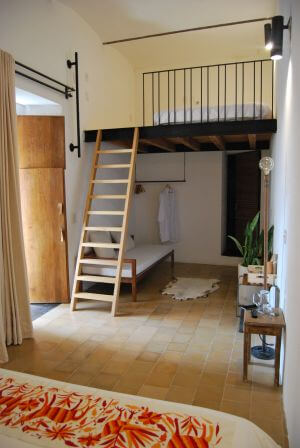 Don't be afraid to get a room in the front of the hotel with a balcony so you can enjoy the street scene below. The double-paned glass and heavy wooden shutters make the rooms on the facade side of the building quiet as tombs while you sleep. The only difference among rooms is location and size, so if you want to stretch out think about reserving a slightly larger one (larger rooms run about 215-270 square feet). A handful of rooms have loft beds for sleeping non-couples or families and there are two rooms tucked in the very back of the hotel for ultimate privacy.

The building has been functioning as a hotel since the 1920s, and is a mix of colonial and Northern African Arabic styles. Sensuality is laced throughout décor, with some of the art on sexual side in case you are squeamish about nude body parts. There are ample textures, shapes, and sounds that engage the rest of the senses, welcoming you to curl up on a leather chair or sunbathe on a wooden bench without reproach.

On the hotel rooftop is a small bar and sitting area as well as a small pool, but this section was still undergoing some touch-ups while we were there so it will most likely feature more prominently in the hotel's future than it does now. The hotel is small, with only 22 rooms for now (there are plans to add seven more rooms) and intimate. In only a few days the staff will know you, and you them. Everyone we dealt with at Hotel Sin Nombre was a pleasure, with the chef even stopped by to see how we liked our food. I hope they can keep up this personalized service as the hotel gets busier, post-pandemic. Coming soon is also a small, in-house spa that will offer massages and a few other treatments. 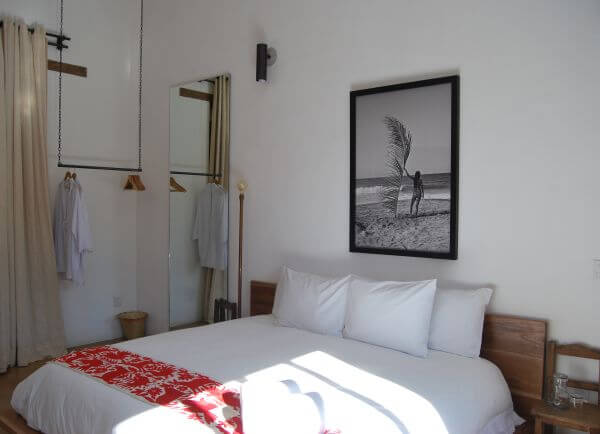 Sin Nombre's location is great for exploring downtown Oaxaca City, with all the Centro Historico sites within walking distance. There's no parking for the hotel itself so if you arrive by car you will have to park in one of the nearby parking garages (overnight was about eight dollars) or on the street. Breakfast is not included but it is recommended (by me). We had delicious chilaquiles with corn smut, fried quintonil leaves, and squash blossoms, as well as entomatadas stuffed with potato that were both heavenly. The coffee was delicious and so were the cocktails the night before. Many of Mexico's luxury boutiques tend to charge charge exorbitant prices for everything, but Hotel Sin Nombre does an excellent job of keeping things reasonable — which is probably why they have a good local following as well as an international one. 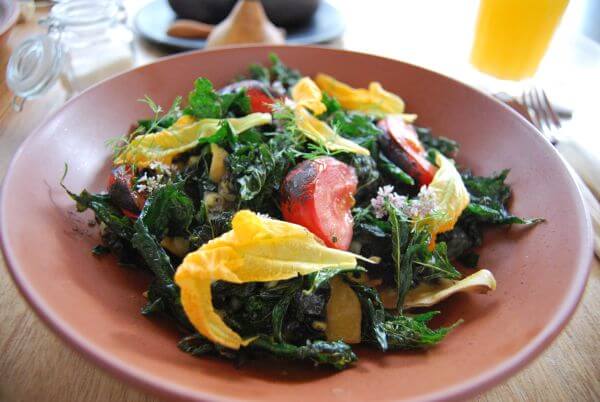 Oaxaca City has a lot of great boutique hotels to choose from if you want to stay downtown but Hotel Sin Nombre really is a little slice of visual and sensual respite, hand-crafted for a weary traveler. Its style and class, including their great Restaurant Sin Nombre, have us predicting that it won't be long before it's hard to get a seat on the floor and a room in the inn.

Web Address: www.hotelsinnombre.com
Total Number of Rooms: 22
Published rates: $187 to $413, depending on the season

Review and photos by Lydia Carey.